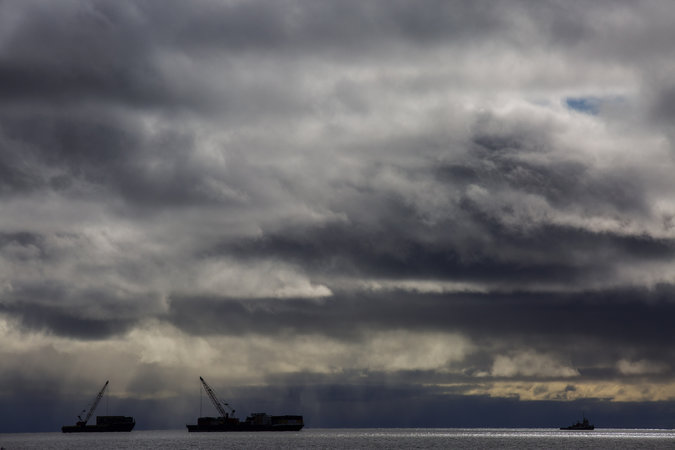 Ships in the Bering Strait, which connects the Pacific Ocean with the Chukchi and Beaufort seas, where the Obama administration canceled auctions for drilling rights.Credit Ruth Fremson/The New York Times

HOUSTON — The Obama administration shut the door Friday on drilling in Alaska’s Arctic Ocean over the next two years, canceling auctions for drilling rights in the Chukchi and Beaufort seas.

The decision by the Interior Department was not surprising because it came less than a month after Shell Oil canceled the most advanced exploration project in the region because of disappointing results from a test well and high costs at a time when oil prices are extremely low.

Still, the announcement is symbolically important as the administration steps back from its cautious support of drilling in the Arctic.

“It does not make sense to prepare for lease sales in the Arctic,” said the Interior secretary, Sally Jewell. She cited the current plunge in oil prices, the amount of offshore acreage already under lease and Shell’s recent decision to put off further drilling after spending $7 billion on a project that ended up producing no oil.

The Interior Department also rejected longstanding appeals by Shell and Statoil, the Norwegian oil giant, to extend existing Arctic leases first obtained during administration of George W. Bush. Taken together, the decisions are a sharp blow to the Alaskan economy, which has been declining because of the fall in oil prices and the state’s slumping oil production.

Senator Lisa Murkowski of Alaska, a Republican, called it a “stunning, shortsighted move,” adding that it was “the latest in a destructive pattern of hostility” displayed by the Obama administration toward the energy industry in the state.

Several other oil companies had already decided to suspend plans to operate in the Alaskan Arctic, where winter darkness and harsh conditions make drilling expensive and potentially harmful to the fragile environment.

Environmentalists applauded the move after months of criticizing the administration for allowing Shell to go forward. Lois Epstein, Arctic program director for the Wilderness Society, called the decision “entirely reasonable” because of Shell’s failure.

Seven companies hold drilling rights in the Chukchi Sea, the area with the highest production potential, but Shell was the only one to begin an active exploration program. Shell’s many accidents and delays served as a cautionary example to other companies even before the price of oil collapsed by more than half over the last year.

For years, the Arctic appeared to be the next big frontier for oil companies with old, mature reserves. But with the advent of hydraulic fracturing of shale fields, the United States has become glutted with oil.

Offshore Arctic drilling is not only in decline in the United States but also in Canada and Greenland. Western sanctions over Russia’s policies in Ukraine have slowed exploration in the Russian Arctic.