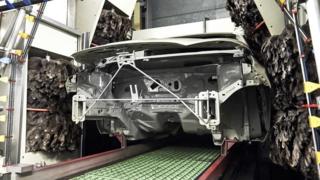 What does it take to turn a 40-year-old car factory into a robotic wonderland of manufacturing technology?

At Ford's biggest European plant, in Spain's south-eastern coastal city of Valencia, it was $2.6bn (£1.7bn; €2.3bn) and a lot of ostrich feathers.

Journalists have now been allowed inside the factory for the first time to see what Ford claims is one of the "world's most advanced, flexible and productive" facilities.

But among all the hi-tech, it's low tech bird plumage that's the big talking point.

You see, ostrich feathers - as any professional cleaner knows - are darn good at collecting dust.

So, after giant 2,000-tonne presses stamp car body panels from steel rolls and robots laser-weld them together, the shell glides along the production line to be painted.

But not before it has been brushed with giant feather dusters. Think garage car wash, but with rollers made of thousands of plumes. Female feathers are the best, apparently.

"The whole system is designed to prevent static electricity from causing particles to stick to the vehicle," says Dirk Hoelzer, Ford of Europe's chief paint engineer.

"Through their unique construction and durability, ostrich feathers are perfect for picking up and holding tiny particles," he says.

But despite the ostrich feathers, and a dust prevention system that involves visitors to the paintshop first going through an "air shower" chamber to remove loose fibres from clothes, some dust still gets through.

So technicians worked with the local university to develop a system to identify imperfections in the paintwork that are scarcely visible to the naked eye.

After a vehicle has been painted - using a more energy-efficient "3-Wet" painting process that applies layers without the need for each coat to dry - it is scanned by multiple hi-resolution cameras. The computer matches the surface to ideal standards.

Blemishes, and their location on the bodywork, flash up on computer screens, and are colour-coded according to the severity.

A tiny fibre or dust spec gets a "red" warning. The car is taken away to be hand-finished.

"Workers used to spend 70% of their time inspecting cars with their eyes, and 30% repairing the paintwork. Now they spend 10% on scanning and 90% on finishing defects," says paintshop manager, Jose Asencio.

The new painting regime also saves time and energy - painting time has been cut by 20%, Mr Asencio says, with CO2 emissions reduced by the same amount.

"It's environmentally friendly and more economic. There's been a big cut in the amount of power needed to run the operation."

Ford also takes cars at random for a "hearing test" to detect rattles or vibrations from a loose screw or badly fitted part, say.

An ultra-sensitive microphone is put in the car, and a sound pulse put through speakers. Any vibration is relayed to a computer.

In a demonstration using a euro coin, quality control manager Juan Soler showed how the computer was able to pick up the rattle even though it was inaudible to the human ear.

The computer also located the coin.

"It's a unique bit of kit," Mr Soler says. "If we identify something that's not right, we can go back to the production line and sort out problems before it's too late."

Although the factory employs 8,000 people - 1,000 more than 18 months ago - "robotisation" has reduced the human input on the shop floor.

Ford installed 900 robots and a computer system capable of monitoring the just-in-time delivery of 18,000 components that arrive on specially-built tracks from the other side of the complex.

Image copyrightFordImage caption About 18,000 components arrive on specially-built tracks from another part of the complex

Six models, including Mondeo, Galaxy, Kuga and Transit van, travel down the same line, with robots - and humans - working on whichever car comes their way.

It doesn't matter if the model is a four or five door, diesel or hybrid, saloon or estate.

"A Vignale [the new upmarket Mondeo] goes down the same line as a Transit. This is the essence of flexible manufacturing - a continuous movement of car bodies," says the plant's operations director Dioni Campos San Onofre.

Such flexibility is certainly not unique among carmakers, but it is essential in modern manufacturing, says John Leech, head of automotive, at consultants KPMG.

"Ford has built in the flexibility to change as fashion changes. That's what they'll be most pleased with," he says.

"That's a lot of cars for a single factory," says Mr Leech. "When it's running at full capacity it will probably be the second biggest Ford plant behind its one in China."

The need for speed

Making up to 450,000 vehicles a year also requires speed.

An advanced wi-fi network was installed and workers are trialling smartwatches to help them communicate more easily with each other along the assembly line.

This connectivity also speeds up the installation of software used in the cars.

Image copyrightFordImage caption Humans are still needed to carry out the final quality checks, despite all the robots

Almost 80% of Valencia's production is exported, and assembly workers must download vehicle-specific language and navigation packs for hundreds of cars each day.

The introduction of such processes, even small ones, all contribute to Ford's aim to create one of the world's more efficient factories.

But the plant still has a way to go to beat some competitors, says IHS Global Insight analyst Denis Schemoul.

"The plant is certainly very efficient," he says. "But the build pace [of each car] is nothing outstanding."

The plant can't rely completely on automation, though. There's a test track where engineers drive around with the explicit aim of finding fault.

Maybe the era of autonomous driving will end this, too. But that's a different story.