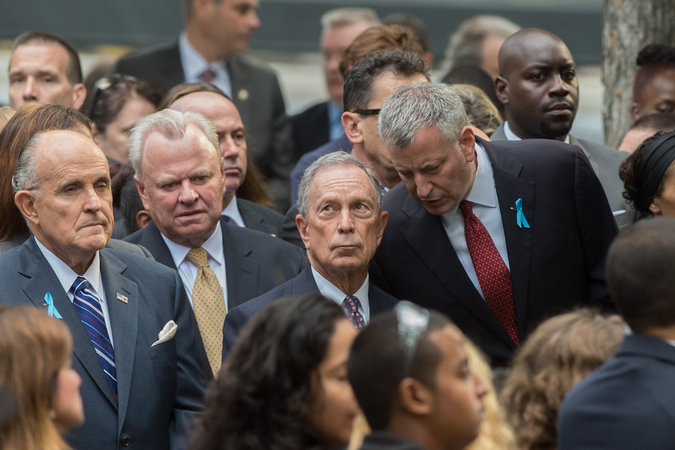 As a candidate for mayor, Bill de Blasio strove to differentiate himself from Michael R. Bloomberg in every way possible, vowing to turn the page on what he cast as an autocratic billionaire’s 12-year reign.

But as Mr. de Blasio, a liberal Democrat, approaches the midpoint of his own term as mayor of New York City, he has executed an abrupt and deliberate shift in posture.Over the last month, Mr. de Blasio has repeatedly hailed Mr. Bloomberg, a political independent, as a champion for the city, doing so in unsolicited, sometimes unexpected, ways. He applauded Mr. Bloomberg for his “vision and for the energy” spent in expanding the No. 7 subway line; he credited him for a hard-fought victory in winning mayoral control of the public schools; and he even took to Twitter to defend him against the National Rifle Association.The timing of Mr. de Blasio’s overtures is no accident: The mayor and his advisers have increasingly come to see the rift between Mr. de Blasio and Mr. Bloomberg as a damaging and unnecessary political liability — especially at a time when Mr. de Blasio’s clashes with Gov. Andrew M. Cuomo, a fellow Democrat, have hurt his ability to push through important pieces of his agenda.Photo 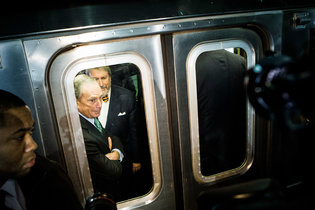 Mr. Bloomberg and other city officials took the  first ride of the No. 7 line extension in 2013, ending at 11th Avenue and 34th Street in Manhattan.Credit Christopher Gregory for The New York Times

Mr. de Blasio and his aides have brainstormed ways to repair the relationship with Mr. Bloomberg, according to advisers to both men, some of whom spoke on the condition of anonymity because the relationship between the two camps remains uncertain and strained.

Mr. de Blasio appears to have grown more acutely mindful of areas where his agenda overlaps with Mr. Bloomberg’s legacy: his aim to extend mayoral control of schools, for instance, and, recently, holding out to extract more concessions from state government in a deal on mass transit funding. Facing resistance from Mr. Cuomo on both fronts, Mr. de Blasio has repeatedly invoked Mr. Bloomberg’s name and record in his public sparring with the governor.

In the most symbolically freighted sign of a peacemaking effort, City Hall has invited Mr. Bloomberg to participate in a tree-planting ceremony with Mr. de Blasio this month, celebrating the Million Tree Initiative that started under Mr. Bloomberg, advisers said.

Mr. Bloomberg is expected to attend the event, where the millionth new tree is to be planted.

Phil Walzak, a senior adviser to Mr. de Blasio, described City Hall’s shifting attitude toward Mr. Bloomberg as part of a natural evolution from campaigning to governing. If there are “areas to forge stronger bonds” with Mr. Bloomberg, Mr. Walzak said, “that’s good for everybody.”

“Campaigns are always in yes or no, black and white terms. Governing offers better and more opportunities for coming together on issues,” Mr. Walzak said. “This mayor wants to have an expansive portfolio of issues that speak to a lot of New Yorkers.”

While Mr. Bloomberg remains a figure of controversy within the Democratic base, he commands deep respect in communities where Mr. de Blasio has struggled: among upscale Manhattanites and white voters in general, and with business leaders and philanthropic organizations. Leaders in the city’s business and financial community privately prodded Mr. de Blasio for many months to seek a reconciliation with the former mayor. But only recently has Mr. de Blasio taken up the advice.

Now when the mayor acknowledges his predecessor, it is no longer with an insistent disclaimer that he and Mr. Bloomberg disagree on a host of important issues. And where Mr. de Blasio might once have parceled out measures of credit to Mr. Bloomberg, on a handful of specific policies, the mayor has now begun to applaud his predecessor in broad terms.

The post, Mr. Walzak said, was meant to “send a broader message that politics does stop at the water’s edge, that issues and values do trump politics.”

Mr. Bloomberg’s aides have called his attention to Mr. de Blasio’s warmer rhetoric, and the former mayor was said to be appreciative of the adjustment. The two men have exchanged pleasantries at public events, but they have no direct personal relationship to speak of, and contact between the two mayors comes in the form of back-channel conversations between their associates.

The most critical line of communication, advisers said, has run between Howard Wolfson, the Bloomberg adviser and former deputy mayor, and Emma Wolfe, Mr. de Blasio’s director of intergovernmental affairs, who has been an energetic advocate for mending fences with Mr. Bloomberg.

Of Mr. de Blasio’s public overtures, Mr. Wolfson said that “compliments and kind words are always appreciated.” But he cautioned that Mr. Bloomberg has no intention of re-engaging with local politics in a concerted way. 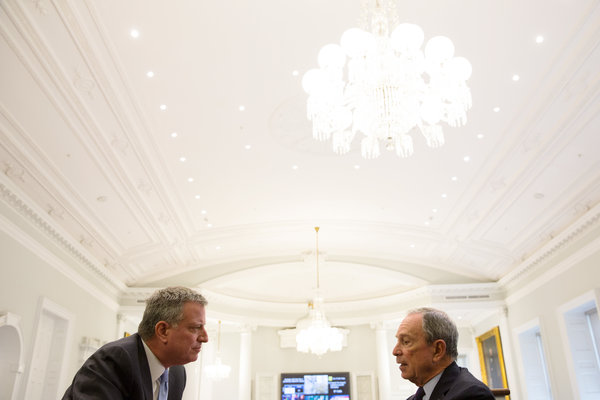 “Mayor Bloomberg made it clear that he wasn’t going to be involved in New York City politics after leaving City Hall,” Mr. Wolfson said. “Mayor Bloomberg is proud of his record and his legacy, but it’s up to voters and the leaders they elect to set a course for the city going forward.”

Mr. de Blasio has not abandoned any of his core disagreements with Mr. Bloomberg in the course of wooing the former mayor and his community of admirers. The mayor has continued to press for police reform and has spoken out aggressively on issues of economic inequality, often assailing the behavior of Wall Street firms that Mr. Bloomberg vigorously defended.

Still, Mr. de Blasio’s sustained praise for Mr. Bloomberg in recent weeks represents a stark change in emphasis from an earlier phase of his administration, when Mr. de Blasio regularly reiterated his criticism of Mr. Bloomberg from the campaign trail.

Mr. de Blasio continued to rebuke Mr. Bloomberg well into his second year in office, and suggested in an interview with Rolling Stone that Mr. Bloomberg had been more attentive to Goldman Sachs employees than to schoolchildren in East New York, Brooklyn.

In corners of the city, that strain of rhetoric has fueled antipathy toward Mr. de Blasio. At a political fund-raising event on Staten Island last week, Rudolph W. Giuliani drew cheers from a Republican crowd by blasting Mr. de Blasio for “that horrible speech about Bloomberg at his inauguration.”

Until his shift over the last month, Mr. de Blasio seemed indifferent to signs of political backlash.

In July, as Mr. de Blasio acknowledged Mr. Bloomberg for having done a “great thing” in creating an environmental sustainability plan for New York, the mayor noted: “The problem with the plan was it didn’t have enough of an equality frame to it.”

Gale A. Brewer, the Manhattan borough president, said she noticed Mr. de Blasio adopting a more enthusiastic tone toward Mr. Bloomberg at the opening of a new station for the No. 7 line in September. There, Mr. de Blasio added no caveat to his remarks. Mr. Bloomberg, he said, “saw an opportunity for this city, and he went at it with all he had.”

“It’s going to be a proud part of his legacy,” Mr. de Blasio said.

Ms. Brewer, a Democrat, said many Manhattan voters found the mayor’s criticism of Mr. Bloomberg excessive, and would welcome the recognition that Mr. de Blasio was “building on some of the Bloomberg efforts.”

“A lot of Manhattanites feel that there were lots of efforts that Bloomberg made that were positive for the city,” Ms. Brewer said. “It’s good that the mayor has his own list of projects, but they don’t think that the former mayor should be criticized as heavily as he has been.”

In the business world, too, prominent leaders have taken note of Mr. de Blasio’s apparent course correction. Kathryn S. Wylde, president of the Partnership for New York City, the influential business coalition, said corporate leaders had “consistently urged the mayor to acknowledge the many positive contributions that Mayor Bloomberg and his administration made to the city.”

“As the mayor has begun to do that, it has led to more good will,” Ms. Wylde said.