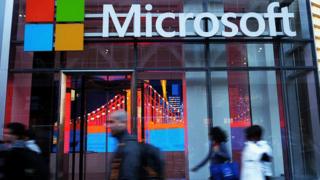 Microsoft has revealed for the first time how many requests it has had from members of the public wanting online content about them to be removed.

During the first half of 2015, it received the most - 759 - from German citizens with the second-highest number of 559 coming from the UK.

These requests are made under the EU "Right to be Forgotten" ruling.

It also revealed the number of content removal requests from governments, with the highest - 165 - coming from China.

Requests for content removal from other governments were relatively infrequent - the US made 11, with Germany making five, the UK and Russia two each and Austria one - bringing the total to just 186 for the six-month period covered.

Microsoft received 3,546 requests for the removal of content from individuals and complied with half of them.

Such requests were made possible by a controversial ruling from the European Court of Justice in May 2014.

This allowed European residents to ask search engines to remove results for queries that included their name if the results were inadequate, inaccurate or no longer relevant.

"This new report illustrates how Microsoft strives to comply with local and intellectual property laws while adhering to our commitment to transparency and free expression," the firm said in a blog post.

At the time, search engines worried that the ruling would mean they would be inundated with requests while internet rights campaigners raised concerns that the ruling amounted to censorship.

All of the major search engines now produce regular transparency reports, partly in reaction to the revelations about government snooping from ex-NSA contractor Edward Snowden.

The vast majority of requests for data come from law enforcement agencies and Microsoft also revealed the numbers of these.

It received a total of 35,228 for customer information in the first half of 2015, which is a slight increase compared to the number of requests for the second half of 2014.

The vast majority - 67% - of all government requests resulted in the disclosure of subscriber or transactional data with 12% of requests rejected. In 16% of cases no data was found.

Just 3% of law enforcement requests resulted in the disclosure of user content - and all of that was done in response to a court order or warrant, Microsoft revealed.