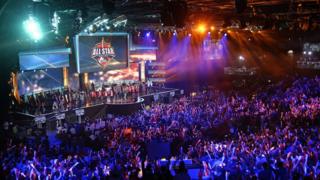 A bidding war has broken out during the sale of a professional team of players of the fantasy game, League of Legends.

The UK's Team Dignitas has two pro League of Legends teams on its books but tournament rules for the game state that they can only oversee one.

The final details of the sale and the team's new owner will be revealed by the end of the month.

The massively popular League of Legends game has an associated World Championships that pits the tops teams against each other for large cash prizes.

The teams meet in a virtual arena and are tasked with destroying the heart of their rivals' base while defending their own.

Michael O'Dell, manager of Team Dignitas, said one of its teams had been part of the League of Legends Championship Series (LCS) for some time. This year, he said, Dignitas's second or "challenger" team has also qualified for the LCS.

"The rules state that you can only manage one, so we are in the process of selling one of the teams at the moment," he told the BBC.

Mr O'Dell confirmed they had found a buyer but would not be drawn on which team would be sold or who had bought them.

The last few weeks had seen a series of bids for the team come in from many pro-game management firms, individuals and other organisations.

"E-sports is growing so fast at the moment," he said. "There are millionaires and billionaires coming in buying teams and there are sports stars looking to buy teams.

"It's really strange dealing with billionaires over this," he said.

Pro-players could also cash in later in October at the start of the 2015 transfer season, which often sees top players garner large fees to change teams.

Tim Edwards, an editor at the PC Games N website, said the size of the deal over the LoL team reflected the growing interest in e-sports by traditional media firms, brand managers and advertisers.

"It would be hard for them to reach that gaming audience any other way," he said.

The quarter-finals of the League of Legends World Championships are being streamed on BBC Three over three days.

Watch here on Friday, here on Saturday and here on Sunday.

The World Championships concludes on 31 October in Berlin.