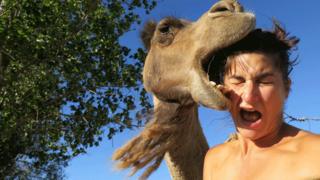 Ok, it's a dreadful pun but it illustrates a growing and serious problem - people are literally dying to take a picture of themselves.

In Russia this year there have been a handful of selfie-related fatalities, including the death of two men in the Ural Mountains who posed for a photo while pulling the pin from a hand grenade.

And, in June, a university graduate died after trying to take a selfie while hanging from a Moscow bridge.

Most recently a 17-year-old boy fell to his death from a rooftop as he tried to take his picture for his Instagram page.

He had previously taken a number of similar pictures of himself posing on high rooftops in the city of Vologda.

The problem isn't just limited to Russia. In the US recently a man died after shooting himself in the neck while taking a selfie.

At least 12 people have died this year while taking pictures of themselves making the practice more deadly than shark attacks, of which there have only been eight recorded deaths in 2015, according to tech news site Mashable.

The statistic is creating very real problems for governments.

In August, officials at the Waterton Canyon in Colorado were forced to close the park after several people were caught getting a little too close to the wildlife.

"We've actually seen people using selfie sticks to try and get as close to the bears as possible, sometimes within 10 feet [3 metres]," said recreation manager Brandon Ransom in a blog.

And, at Yellowstone National Park, officials issued a warning after five separate incidents of selfie-takers being gored by bison.

In Australia, a rock that looks like a wedding cake was fenced off because too many people were climbing it to take pre or post-wedding photos of themselves.

While in Russia, in response to the number of deaths there, the Interior Ministry launched a campaign warning that "self-photography could cost you your life".

"A selfie with a weapon kills," the brochure read. The accompanying poster campaign listed dangerous places to take a selfie.

So why are some people willing to risk their life to take the ultimate selfie?

It may come down to pure bravado, thinks Lee Thompson - whose snap of himself on top of the Christ the Redeemer statue in Rio de Janiero went viral in June 2014.

"People see pictures like mine and see how they spread across the world and see a way to make themselves famous for 15 minutes," he told the BBC.

A professional photographer, Mr Thompson admits that the picture he took was done as a publicity stunt for his travel company, Flashpack. He did, however, get permission to climb the statue.

"I'm not a serial selfie-taker - this shot was to publicise my business. It was the shot I knew I had to get because people love selfies," he told the BBC.

He admits that the trend towards ever more dangerous selfies is "getting out of control".

"Be creative with your pictures but don't put yourself in danger," he advised.

According to research published by the Ohio State University, the pictures that people post on social media can tell an interesting story about their personality.

Hundreds of tests on people's social media habits were conducted for the study, which showed that people who post a lot of selfies also tend to score higher in traits of narcissism and psychopathy.

Lead researcher Jesse Fox said that, for many, a dangerous selfie is worth it for the number of likes and comments it will generate.

"Likes are a quantifiable way of measuring popularity and these days it isn't enough to just post a picture of yourself, because everyone is doing that. The more extreme it is, the more likely you are to stand out and get lots of likes and comments."

The rise of the selfie as an art form has not gone unnoticed by manufacturers such as Asus, which recently launched a phone dubbed the ZenFone Selfie, that as the name suggests, comes with a powerful camera.

But it too is sensitive to the issue of risk-taking selfies and its marketing of the device in France came with a poster campaign similar to that of the Russian government, pointing out places where taking a selfie would be ill-advised - including in front of trains, in cars and with bears.

Despite the publicity, there doesn't appear to be any let-up in the amount of death-defying selfies being taken, nor people's appetite to look at them.

A video on YouTube, compiling what it describes as the "25 most dangerous selfies ever", has been viewed over 20 million times.

James Kingston's picture of himself hanging off a crane (above) came in at number three.

The list also features several self-portraits with sharks which had gone viral but which the video exposes as fakes.

Selfies may have become more dangerous than shark attacks but it seems that even the most intrepid self-shooter draws the line at a picture with a Great White.