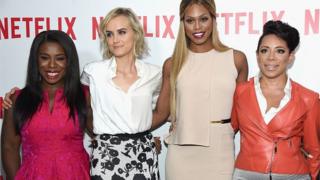 Online TV company Netflix gained another 3.62m subscribers between July and September, to take its total to 69.17m.

However, the number of new subscribers in the US was less than the company had forecast, prompting shares to fall in after-hours trading.

It attributed this to the "ongoing transition to chip-based credit and debit cards".

In the US it had predicted an extra 1.15m subscribers in the third quarter, but in fact saw just 880,000 new additions.

In an interview to discuss the results, the chief financial officer David Wells said the move to new, more secure chip and pin devices, which banks in the US have been introducing this year, often meant that customers had to re-enter their details.

"There may be other things going on here but certainly the transition is not helping," he said.

Barton Crockett, an analyst at FBR Capital Markets said: "The slowdown in US subscriber growth was particularly disappointing because one would expect that since Netflix just raised rates last week, this number would have been strong."

Netflix has been doing a fair bit of gambling lately.

First, it took the not-unanimously-popular decision to remove thousands of films from its catalogue in favour of spending money on original programming. And then last week it said it was going to up its prices as well.

Slow user growth in the US will worry investors - although the company has blamed the transition in the US to chip cards, rather than waning interest. Internationally there were more new subscribers than anticipated, suggesting the chip excuse may be a valid one.

As for its future direction, Netflix's chief executive Reed Hastings and chief content officer Ted Sarandos told investors the company was looking to compete with the likes of Vice, but Netflix's PR team later stepped in to clarify that this didn't mean Netflix had its eye on becoming a news organisation.

It's only natural that Netflix would be looking to add new genres to its original programming offer. But it will be years until we'll know whether Netflix's gambling has paid off.

Internationally, the company added more subscribers than it had predicted, 2.74m compared with a forecast of 2.4m. It has recently launched in Spain, Italy and Portugal and plans to expand into South Korea, Hong Kong, Taiwan and Singapore in early 2016.

"It is clear that Internet TV is becoming increasingly mainstream and traditional media companies are adjusting to the shift from linear to on-demand viewing," the company said in its letter to shareholders.

Last week Netflix, which makes programmes such as House of Cards and Orange is the New Black, increased prices in several countries, including the US, in order to "improve our ability to acquire and offer high quality content".

It also decided not renew a contract with the distributor Epix, meaning that thousands of films, such as the Hunger Games and Transformers, will be removed from its site. The company said this was because most of the content was not exclusive and often only available in the US.

It said that so far it had seen "no material reduction in US feature film viewing".