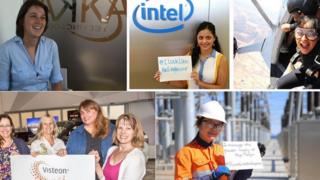 On Ada Lovelace Day, four female engineers from around the world share their experiences of working in male-dominated professions.

Now in its sixth year, the annual celebration of women working in the fields of science, technology, engineering and maths (Stem) is named after the woman now regarded as the world's first computer programmer.

Ada Lovelace worked with the inventor Charles Babbage on his "analytical engine" creation in the 1850s - a mechanical computing device that he designed but never built.

This year is also the 200th anniversary of the the birth of Ada Lovelace, daughter of mathematician Annabella Milbanke and the poet Lord Byron.

When Isis Anchalee's employer OneLogin asked her to take part in its recruitment campaign, she didn't rush to consult the selfie-loving Kardashian sisters for styling tips.

"I was wearing very minimal make-up. I didn't brush my hair that day," she said.

"They just asked for a photo of my face alongside what I really enjoy about working at the company."

But the resulting image of Ms Anchalee created a social media storm when it appeared on Bart, the San Francisco metro.

Lots of people questioned whether she really was an engineer.

"There were two other ads that went up that had two male co-workers - one of them was wearing a large black hat and a shirt that said 'hacker'," Ms Anchalee said.

"I thought that one might have been a little controversial but it was mine that people seemed to care about."

"It was not just limited to women - it resonates with every single person who doesn't fit with what the stereotype should look like," she said.

Thousands of people have taken part, and other professions including surgeons and physicists have also adopted the idea.

Isis Anchalee, who taught herself to code at the age of eight, is no stranger to her appearance and career choice causing confusion.

"You're way too hot to be an engineer," said a man in the lift of her block of flats when she wore a T-shirt from program-sharing service Github.

An awkward attempt at flattery, perhaps?

"It definitely was not a compliment," she countered.

"I was dumbfounded. What do you say to something like that?

"In a perfect world I would love for there not to be a need for me to stand out as a female engineer - but we have to work really hard.

"I've ended up where I'm at and I think I'm kicking ass."

"My parents, my brother, my community, all were against me," said Sovita Dahal of her decision to pursue a career in technology.

"I was going against traditional things."

Nepalese women are still expected to marry at the age of about 21, go to live with their husbands and raise a family, she explained.

But Ms Dahal was determined to follow a different path.

"In my schooldays I was fascinated by electronic equipment like motors, transformers and LED lights. Later on this enthusiasm became my passion and ultimately my career," she said

There were just three women among the 35 students on her university course. One left, one got married and only Sovita Dahal finished her degree.

"After my high school [my family] didn't like me to enter the tech field - parents think it is only for boys, not for girls."

Fortunately she was able to win her family round.

"It was very, very, difficult to convince them. But now they are very proud of me, they respect my decision and they also encourage other girls to take these kind of studies.

"I have no family [of my own] - I would not have had time to pursue my career.

"I chose my career against marriage."

Roma Agrawal has worked as a structural engineer for 10 years, and was part of the team that designed London skyscraper The Shard.

"When I first started out, I would sometimes go to construction sites and there would be pictures of topless women in the cabins," she said.

Fortunately Ms Agrawal was not deterred by the choice of wallpaper.

"You see much less of it nowadays. There are lot more women on site now."

But the argument that women have a biological struggle with maths and science subjects is infuriating, Ms Agrawal said.

"There is no proof that engineering isn't for women because of some biological reason.

"When people say, 'Women are not naturally as good as maths and science,' nothing can make me more upset because it's simply not true."

Ms Agrawal would like to see more parents and teachers supporting the message that engineering is an achievable career for girls - but also believes that Britons in particular have an attitude problem to address as well.

"People easily say, 'I'm terrible at maths,' or 'I'm awful at numbers.' If you said that kind of thing in India people would look at you funny," she said.

For Dolphin Guan, currently working with mobile phone company Seeed Studio in China, the difference between men and women is very much still an issue.

"Women have blue-sky thinking, men have precise thinking with logic," she said.

"So in our society, most of the females work on civilian [jobs], and men work in technology. But as technology is advancing, and everything becomes possible, it is very good that women [can] be part of it."

Ms Guan finished university last year. She studied computer science with 40 students, of whom just four or five were women - but in her industrial design class the gender ration was 50:50.

"These years in China, I can see more and more women working in tech/engineering jobs," she said.

"And a good thing about being a tech/engineer is when we have a good idea, we are able to make it happen."