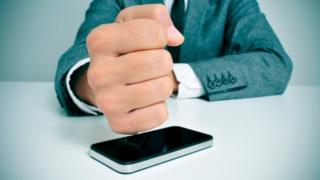 The fight-back against ad-blockers is ramping up.

German tabloid Bild is the latest to announce it will prevent users who have installed the advert-hiding plug-ins from viewing its articles.

It joins dozens of other sites who object to the technology's threat to their income.

Users have flocked to the extensions to speed up page-load times and reduce the toll on their mobile devices' battery life.

Apple's recent move to start supporting ad-blockers on its iPhones and iPads has brought the matter to the fore.

But other tech companies are trying to convince users there is a way to live with ads, by making them less frustrating.

What problem are they trying to solve?

That one that leaves you shouting at your phone or tablet to load a web page you want to see.

Visiting a web page on a phone or tablet can be irritating and not just because the speed of mobile connections can be far below that of the average home network.

Even wi-fi is often slower in a coffee shop or on a train because so many other people are using it.

The experience is made worse by pop-up, rollover and interstitial ads, navigation bars and the like that make a page jump up, down, left and right as different bits load.

We've all tried to stab a link with a finger only to have the page leap down so you accidentally hit the ad that you then have to kill to get at the actual page.

Solving the problem is important because so many of us now get our favourite sites via handheld gadgets.

Amit Singhal, Google's head of search, has said that this summer was the first time it had seen more searches done via mobile than desktops.

It is not just mobiles

Browsing the web on a laptop or desktop can be frustrating when an entire page is left hanging because an ad network somewhere out there in cyberspace is having a bad day.

Then there are the auto-playing video ads.

Or the ones that obscure the page you want to see and make you hunt for the "X" that'll get you back to where you wanted to be in the first place.

And don't forget the links lurking in pages that explode into ads when your mouse pointer just grazes them.

Or the hidden trackers that watch what you do on a page and report it to anyone who buys their data.

A study by the New York Times indicated that more than half of all the data on popular news sites came from sources unrelated to articles.

It's no wonder that millions of people now use ad-blockers to remove these irritants. The exact numbers are disputed, but about 40% of people are believed to now use ad blockers.

How did it get so bad?

Because adverts pay the bills for so many websites. That has meant ads are no longer simple images. Instead, they come from lots of different places and these suck up bandwidth and processing cycles.

Added to this are the trackers and other behind-the-scenes technologies that call on scripts written, for the most part, in the Javascript language. Some pages are megabytes bigger than they need to be, because they use so many scripts to watch what you do and interact with your clicks.

Some sites send out hundreds of calls to other places every time they load a page, suggests analysis by one developer. This inevitably slows loading, eats memory and consumes data allowances.

Maybe, but they might be part of the problem too, according to veteran web designer Paul Boag.

"Sometimes we get a little bit lazy because we are under pressure of time and budget to get something finished," he says.

Many designers speed up by using ready-rolled frameworks that contain many of the functions they want to use. However, says Mr Boag, they also include lots of stuff that a site might never call on.

And then there are web fonts, Flash and all those social media buttons through which you can express "likes" or share what you see. The way a page is written can mean ads load first and content comes later.

"It's death by a thousands cuts, really," Mr Boag says.

Facebook's Instant Articles - which involves the social network hosting and delivering copies of publishers' stories from its own servers - is one alternative effort to speed up delivery by stripping out the extra web page elements.

And on the horizon, Google, Twitter, LinkedIn and dozens of big-name publishers - including the BBC - are working on a separate scheme called Accelerated Mobile Pages (AMP), which will also deliver streamlined pages stripped of Javascript elements.

So, if I pay for access, I get faster web pages?

Not always and not necessarily, says Mr Boag.

Designers may be using the same tools and techniques for sites that sit beyond a paywall or subscriber login page, so those might be just as bloated.

And, Mr Boag says, those sites are probably going to be keen to push adverts at you so might make all those data-eating calls out to other servers.

"Developers should start with the mobile pages and build up in terms of complexity," he says.