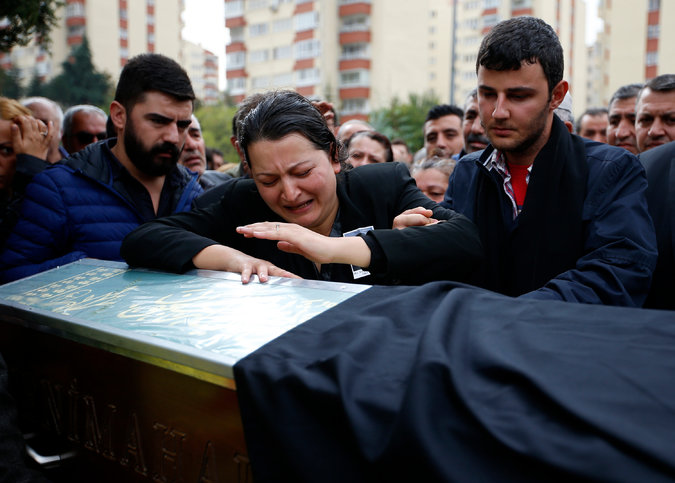 A funeral in Ankara, Turkey, today for a victim of bombings over the weekend.Credit Emrah Gurel/AP

(Want to get this briefing by email? Here’s the sign-up.)

Here’s what you need to know:

President Obama’s legacy, and how much a Democratic successor should embrace it, will hover over the Democrats’ first presidential debate on Tuesday.

Whether Vice President Joseph R. Biden Jr. will join Hillary Rodham Clinton and four others on the podium is still unknown.

Today, Senator Bernie Sanders of Vermont and Donald J. Trump are among the candidates at a conference in Manchester, N.H., hosted by the bipartisan group No Labels. About 1,000 undecided voters will hear from eight speakers at the all-day live-streamed event.

Mourners gathered in Ankara again today to vent their anger at the Turkish state, which they held responsible for the carnage that killed nearly 100 people, mostly Kurds, at a peace rally over the weekend.

No group has claimed responsibility for the attacks. Turkey’s prime minister said today that the authorities were close to identifying one of the suicide bombers.

The Washington Post said today that its reporter Jason Rezaian, who has been jailed for 14 months in Iran on espionage charges, was convicted after a trial that ended two months ago.

Iran appeared to be moving today to position Mr. Rezaian’s case to get the release of Iranians detained in the United States.

Angus Deaton, a microeconomist who is a native of Britain and a professor at Princeton University, was awarded the prize today for “his analysis of consumption, poverty and welfare.”

• Sorting out the Republican leadership.

Representative Paul D. Ryan retreated to his hometown, Janesville, Wis., over the weekend, but said that he still wouldn’t run for speaker of the House.

Republican officials are trying to reorient their leadership after the withdrawal of Kevin McCarthy as a candidate last week. Lawmakers have a weeklong recess for Columbus Day.

• The shooting of Tamir Rice.

An indictment appears less likely against a rookie Cleveland police officer after two outside reports concluded that he was “reasonable” in deciding to shoot 12-year-old Tamir Rice in November.

But the investigation will continue and a grand jury will ultimately decide on charges. The child, who was killed, was carrying a replica gun that looked much like the real thing.

• Dell said today it is buying the computer storage maker EMC for about $67 billion in the largest acquisition in the tech industry.

• Anheuser-Busch InBev just won’t give up: Despite three rejections, the brewer again raised its takeover bid for its rival SABMiller today, to as much as $103 billion.

• The vice chairman of the Federal Reserve, Stanley Fischer, said an interest-rate increase this year was “an expectation, not a commitment,” and depended on the global economy.

• The Group of 20 industrialized and emerging nations committed to toughening laws and increasing cross-border cooperation to prevent corporate tax evasion.

• Officials said374 people were still missing a week after a hillside collapsed in a Guatemala City suburb, burying a neighborhood and killing 253 people.

• Iraqi Shiitespraised Russian military moves in Syria, as an American-led campaign against the Islamic State stalls.

• With President Vladimir V. Putin in the stands, Lewis Hamilton of the Mercedes team won the crash-marred Russian Grand Prix.

• The U.S. soccer team fell to Mexico for a spot in the 2017 edition of the Confederations Cup, but U.S. golfers beat the international team to win the Presidents Cup in South Korea.

• Jerry S. Parr, the Secret Service agent who is credited with saving President Ronald Reagan’s life in a 1981 assassination attempt, died at age 85.

• “Pan,” the $250 million movie that traces the origins of Peter Pan, bombed at the box office over the weekend, taking in about $15.5 million at North American theaters. The No. 1 draw was “The Martian.”

• Here are your episode recaps for “The Walking Dead,” “Homeland,” “The Leftovers” and “The Affair.”

• After the broken leg.

Major League Baseball may move to hear as soon as today the appeal of Chase Utley of the Los Angeles Dodgers, who was suspended after breaking the leg of the Mets shortstop Ruben Tejada in a hard slide into second base on Saturday. (We earlier said incorrectly that the slide was into third.)

The appeal gives Utley the right to play until it is resolved. Joe Torre, Major League Baseball’s chief operations officer declared the slide illegal and sidelined Utley for two games in the Mets-Dodgers playoff series, which resumes today.

• No charges for Cecil hunter.

Zimbabwe will not charge an American dentist for killing its most prized lion in July, named Cecil, because he had obtained legal authority to conduct the hunt, a cabinet minister said today.

In “Crazy Ex-Girlfriend,” a new romantic-comedy-musical series, Rebecca Bunch, played by Rachel Bloom, chases an ex-boyfriend across the U.S. (The CW, 8 p.m. Eastern).

And “Fargo,” with its odd mix of violence and deadpan humor, returns for a second season on FX (10 p.m. Eastern) with a triple murder at a Waffle Hut.

A spinoff of the popular Minecraft app and video game gets the red-carpet treatment at its “premiere” at a Hollywood theater tonight.

The audience gets to decide the actions in the game, Minecraft: Story Mode, which goes on sale Tuesday.

Here are the weekend football results.

A new U.S. record was apparently set at the pumpkin weigh-off at the Stillwater, Minn., Harvest Fest: 2,185 pounds.

But it’s early yet. Pumpkin-weighing contests are being held across the country in the run-up to Halloween.

Last week, Portland, Ore., and Albuquerque became the latest cities to ditch Columbus Day. A year ago, Seattle and Minneapolis did the same. Berkeley, Calif., got rid of it back in 1992. 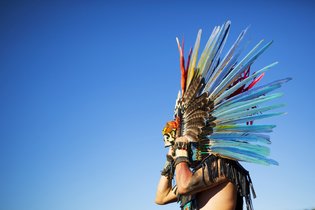 And some states — like Alaska, Hawaii and South Dakota — never made it an official holiday, even though Franklin D. Roosevelt gave today’s celebration federal status in 1937.

The backlash against celebrating Christopher Columbus’s landing in the Caribbean in 1492 (he didn’t actually reach, let alone discover, mainland America) has been years in the making.

Many localities are replacing Columbus Day with Indigenous Peoples’ Day, Native Americans’ Day or something similar. Since the day also commemorates Columbus’s Italian heritage, some want to make it Italian-American Day.

Outside the U.S., many Spanish-speaking countries already use the day to celebrate Hispanic cultures, indigenous peoples or, in the case of Venezuela, resistance to the European invasion.

“You can’t erase history and culture with a piece of paper and pencil,” a Native American leader said about Portland’s vote last week. “But you can do things like this.”

Your Morning Briefing is published weekdays at 6 a.m. Eastern and updated on the web all morning.

What would you like to see here? Contact us at This email address is being protected from spambots. You need JavaScript enabled to view it..

You can sign up here to get the briefing delivered to your inbox.