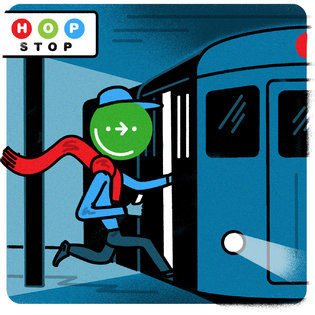 HopStop, until recently the go-to app for New York’s savviest subway navigators, is nearing the end of the line. It has been owned by Apple for two years, and as of this month, it is no longer featured in the App Store. For those who have the app, it continues to operate at the time of this writing, but now the core of HopStop’s transit directions has been folded into the Maps application of the newest iPhone operating system.

The transit feature in Apple’s iOS 9 is passable, and will no doubt improve. It gave me competent directions from my office in Midtown Manhattan to my house in Bedford-Stuyvesant, Brooklyn. But many of the features that made HopStop such a useful tool — a subway map that was available offline, a panoply of suggested route options — are not as easy to use in this iteration.

If HopStop had remained the only reliable transit app in town, this would come as bad news. Luckily, HopStop was overtaken by a competitor two years ago. That competitor, Citymapper, remains the single best app for finding your way in the city.

Azmat Yusuf, the founder of Citymapper, said he had started hearing from a lot of formerly dedicated HopStop users who had made their way to his app.

Citymapper continues to stand out for the abundance of information with which it supplies users. Plug a desired destination into the app, and you learn of multiple routes to get there on multiple modes of transit.

There’s no need to search or specify how you’d prefer to travel: The destination is all the app needs, and then the various routes — by walking, biking, taxi, and several different subway and bus lines and combinations thereof — are a click away, as well as information about calories burned and the price of a taxi.

Citymapper is also intuitive. I was in Boston last weekend, and when I opened the app on my return to New York, it recognized that I had changed cities and adjusted its settings accordingly, after asking. (Citymapper works with nearly 30 cities’ transit systems, including those in Hong Kong, Lisbon and Philadelphia.) If you’re riding the bus, it dings when you’re approaching your stop. It adjusts with real-time information about subway delays.

Citymapper is still entirely venture-backed and sources the data it uses from a variety of different places, including Apple and Google Maps. I asked Mr. Yusuf if, now that Apple is beefing up its transit directions, he was worried that Citymapper might lose access to that information.

He expressed confidence that both companies would continue to share. But, he said, even if that were to happen, there would be other places to find the information. “In such a situation, we can always find Plan B,” he said.

That is Citymapper’s greatest strength: It makes the options for Plans B through J abundantly clear. JONAH BROMWICH