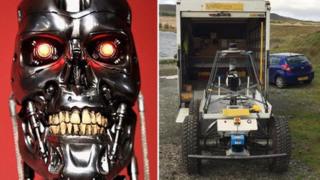 Image copyrightThink Stock/BBCImage caption Idris (right) may be able to follow people like the terminator, but it is designed for far less sinister purposes

The idea of a robot following you wherever you go, getting faster as you speed up and yelling "target found", may sound like a nightmarish vision from a sci-fi film.

But four-wheel drive vehicle, Idris, has been programmed to do just that by experts at Aberystwyth University's intelligent robotics group.

The electric four-wheeler, about the size of an Austin Mini, can pursue people, vehicles or anything it can "see".

As part of a series looking at robotics, BBC Wales finds out about the software which makes 400kg Idris run and why it could be very useful.

Dr Frederic Labrosse, who wrote much of the software, has acted as quarry for the all-terrain robot, walking ahead while it follows. He admits it can be "disconcerting".

"It's scary at some point, but you've got to trust the software. The problem is the faster you go, the faster it goes. So, you cannot escape, basically," he said.

"The trick is just to jump in front of it and that trips all of the safety devices and that will stop the robot."

Of course, in reality Idris is not as menacing or sinister as the concept might suggest, in spite of its detachable mechanical arm and gripper.

It is currently programmed to move no faster than 10 mph and halts whenever its laser scanners detect an obstruction.

Dr Labrosse said the main application would be for convoying, where a series of automated vehicles are led by a human driver or a smarter robot at the front.

In this way, the robots could be sent to places where its not desirable to have many people, such as war zones, areas used for mining and anywhere hit by a disaster.

Using programming developed at the university, the robot was used to laser-scan a disused part of the Vivian quarry, in Llanberis, Gwynedd, for the Royal Commission of Ancient and Historical Monuments of Wales.

The vehicle has a number of cameras to take in its surroundings.

But how does Idris "see" what it's tracking and differentiate it from everything else?

"We give it an image of the object to follow and it just tries to find the same pixels or similar pixels in the image (it takes in).

"So, it does not know that what it follows is a person or a car or whatever. It does not recognise in that way we as human beings would do."

But what about the most important question?

"Does it work? Sometimes well, sometimes not so well," Dr Labrosse said.

During a demonstration for the BBC, co-ordinator of the intelligent robotics group Dr Mark Neal was enlisted as the "object" for Idris follow around a small lake while he wore a fluorescent bib.

Idris sounded "target found" when it detected the hi-visibility bib, which had been programmed in as its leader. It then followed Dr Neal along a rough path.

At points when the light changed or when Dr Neal left its field of vision, Idris said "target lost... lost... target definitely lost" and halted.

However, Dr Labrosse said adjustments to its software will improve performance.

The machine has already been made to follow Dr Neal's car over a considerable distance, negotiating a cattle grid on its way.

But Dr Labrosse is not content with the stark image of a robotised vehicle on Land Rover wheels rolling over the Ceredigion countryside, unnerving the sheep on a nearby hill.

"It could be a flying vehicle, for example," he said. "We're doing applications where we have flying robots that automatically follow a vehicle or a boat on the ground."

By Michael Burgess and Philip John