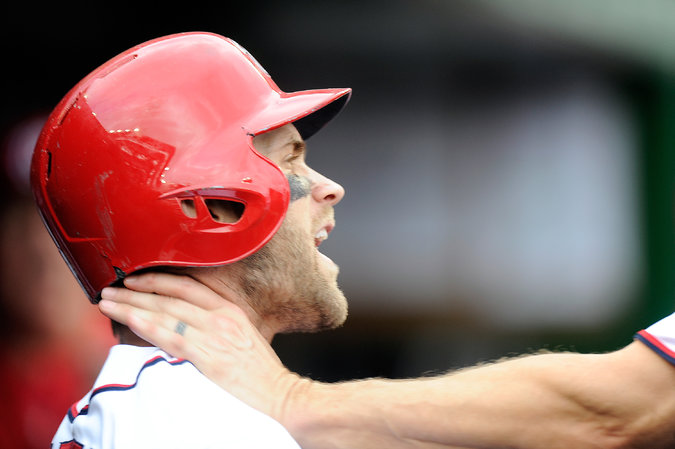 The Nationals' Bryce Harper was attacked by his teammate Jonathan Papelbon in the home dugout on Sunday.Credit Greg Fiume/Getty Images

We have a winner for the most ridiculous decision in the major leagues this season, and nothing else is close.

In the bottom of the eighth inning at Nationals Park on Sunday, Washington closer Jonathan Papelbon attacked Bryce Harper in the home dugout. Standing on the dugout stairs above Harper, Papelbon escalated a verbal altercation by lunging at Harper, placing his hand around his neck and slamming him into the wall.

Then, as if nothing had happened, Matt Williams let Papelbon go back out to pitch. That decision should be the final one he makes as Washington’s manager.

The Nationals have been the biggest flop in the majors this season. Widely predicted to win the World Series — including by this reporter — the team has barely managed a winning record, at 79-76. Upon elimination Saturday night, Williams offered empty platitudes in his postgame news conference.

“We’ve got games to play,” he said, according to The Associated Press. “We’ve got to win tomorrow.”

Because the Nationals had won Saturday’s game — even though the Mets had wrapped up the National League East — Williams tried to spin it as “a good night for everybody.” 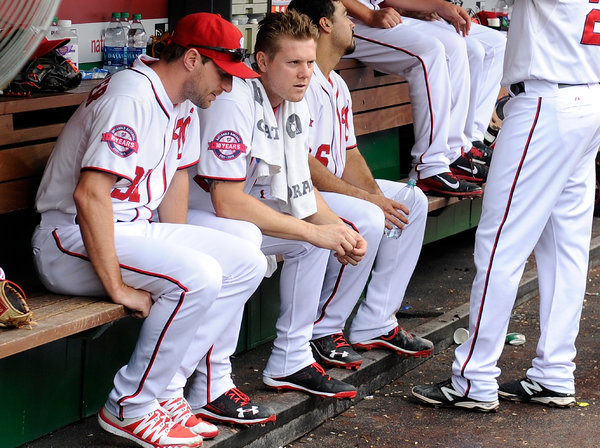 Jonathan Papelbon, center, after he escalated a verbal altercation by lunging at Harper.Credit Greg Fiume/Getty Images

Williams is a nice man — polite, accommodating and generally upbeat as a player and a manager. But he has consistently seemed overmatched, strategically, and his comments Saturday made him seem out of touch with the frustration of his fan base.

Perhaps those faults could have been overcome. But for Williams not to immediately remove Papelbon from the game defies logic. Papelbon went after the best player in the game, Harper, the 22-year-old superstar whose emergence has been by far the best thing that has happened to the Nationals this season. And Papelbon got away with it.

There is history here. On Wednesday, Papelbon plunked Baltimore’s Manny Machado with a pitch after Machado had homered in his previous at-bat. Asked about it after the game, Harper noted that after Machado hit a home run: “Somebody drilled him. I mean, it’s pretty tired. It’s one of those situations where it happens and, I don’t know, I’ll probably get drilled tomorrow.”

Major League Baseball issued a three-game suspension to Papelbon, who appealed. If the Nationals want to show real leadership — and support for Harper, their franchise player — they should suspend Papelbon for the rest of the season and fire Williams.

General Manager Mike Rizzo was not available to reporters after the game, but Williams seemed oblivious to the issues. Asked why he allowed Papelbon to keep pitching after the fight, Williams said, “He’s our closer.”

Right. He is. And he just attacked your best player.

Harper had just made an out before the fight, and Papelbon, apparently angry with Harper for not running hard, yelled at him from the dugout. The verbal sparring continued after Harper descended the steps, and then Papelbon attacked. No matter what Harper may have said or done, there was no justification for what followed.

I do not pretend to know the dynamics of the Nationals’ clubhouse, but typically, the hierarchy begins with a transcendent player like Harper — not a newcomer and bully like Papelbon, no matter his edge in service time. Preserving that order would seem to have demanded some form of punitive action on the spot.

But, hey, Papelbon is the closer, the score was tied, and the ninth inning was coming up. Williams, already notorious for his handling of the bullpen, had no Plan B. Apparently he saw no need for one.

Papelbon — acquired from Philadelphia in July, just before the Nationals’ season spiraled — went on to allow a go-ahead homer Sunday as part of an eight-run inning by the Phillies, who won the game, 12-5.

To his credit, Papelbon acknowledged to reporters Sunday that he was wrong to fight with Harper. But he also said it was important to “play the game the right way.”

Perhaps Williams approved — he did remove Harper from a game last April for not hustling. But with Papelbon playing sheriff, consider the source. This is the same pitcher who grabbed his crotch as fans booed in Philadelphia last September, earning an ejection and a seven-game suspension.

Harper said little after the game, besides wanting to finish up strong for the remainder of the season. Asked if Papelbon had told him he was sorry, Harper replied: “Yeah, he apologized. So, you know, whatever.”

He added: “It’s like brothers fighting. That’s what happens.”

Asked if he had fought with a teammate before, Harper said, “Usually fighting the other team.”

Harper is part of the solution in Washington. So are Max Scherzer, Stephen Strasburg, and young players like Trea Turner and Joe Ross. The Mets have ascended in the division, but there is hope in Washington.

Yet there is also Papelbon, who is on the payroll for next season at $11 million. And there is Williams, whose 2016 option was exercised in February. Neither should be in Viera, Fla., when the Nationals gather next spring.

The Nationals should give a clear signal of support for their best player, a signal Williams refused to send Sunday. This is Harper’s team, and he deserves better.