UNITED NATIONS — For the second time this month, Russia moved to expand its political and military influence in the Syria conflict and left the United States scrambling, this time by reaching an understanding, announced on Sunday, with Iraq, Syria and Iran to share intelligence about the Islamic State.

Like Russia’s earlier move to bolster the government of President Bashar al-Assad by deploying warplanes and tanks to a base near Latakia, Syria, the intelligence-sharing arrangement was sealed without notice to the United States. American officials knew that a group of Russian military officers were in Baghdad, but they were clearly surprised when the Iraqi military’s Joint Operations Command announced the intelligence sharing accord on Sunday.

It was another sign that President Vladimir V. Putin of Russia was moving ahead with a sharply different tack from that of the Obama administration in battling the Islamic State, also known as ISIS or ISIL, by assembling a rival coalition that includes Iran and the Syrian government. 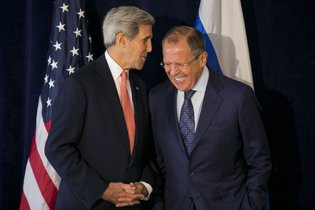 The effort, which Mr. Putin is expected to underscore in his speech at the United Nations on Monday, not only puts Moscow in a position to give military support to Mr. Assad, its longtime ally in the Middle East, but could also enable the Kremlin to influence the choice of a successor if Mr. Assad were to eventually leave power.

Russia’s moves are raising difficult questions for the Obama administration, which remains deeply conflicted about American military involvement in the Syria conflict. Ensuring that the Russian military and the United States-led coalition, which is carrying out airstrikes against the Islamic State, “deconflict” and avoid running into each other is only part of the problem: The Obama administration and the Kremlin do not appear to agree even on the main reason for the conflict.

American officials, who have long cast Mr. Assad as the primary source of instability in Syria, assert that the Syrian leader’s brutal crackdown provided an opening for jihadist groups and that the crisis cannot be resolved until a political transition is negotiated that requires him to leave power. But Russian officials see the Syrian government as a bulwark against further gains by groups like Islamic State and Nusra Front and sometimes suggest that the defeat of the Islamic State should come before a negotiated solution for the Syrian conflict.

Even as the United States has banked on a diplomatic strategy of trying to enlist Russia’s cooperation in Syria, the Kremlin has continued to jolt the White House with its unilateral military and political moves.

“This is not yet coordinated,” Secretary of State John Kerry said Sunday at the start of a meeting in New York with Sergey V. Lavrov, the Russian foreign minister. “Our presidents will be meeting tomorrow. This is the beginning of a genuine effort to see if there is a way to deconflict, but also to find a way forward that will be effective in keeping a united, secular Syria that can be at peace and stable again without foreign troops present, and that’s our hope.”

Robert S. Ford, the former American ambassador to Syria, said that Russian officials have long said they are not wedded to Mr. Assad but have insisted his government is legitimate and rebuffed efforts to impose a successor.

Adding to the United States’ concern, Russian surveillance drones have conducted about half a dozen reconnaissance missions from a recently bolstered base near Latakia. The drones have flown over Latakia, western Idlib, and western Hama, according to a senior United States official who spoke on the condition of anonymity to discuss confidential intelligence assessments.

American analysts have not detected any Islamic State fighters in those areas, the official said. That raises the prospect that, despite its stated focus of fighting the Islamic State, Russia may take the opportunity to attack Syrian opposition fighters who are focused on battling Mr. Assad’s government and who are also backed by the United States.

Mr. Putin has been dismissive of the Pentagon program to train and equip the moderate Syria opposition — an effort that has yielded only a small handful of fighters. At the same time, new volunteers have been arriving to replenish the ranks of the Islamic State even more quickly than they are killed.

Through it all, the United States and some of its allies have focused on expanding an airstrike campaign against ISIS in Syria and Iraq. But the latest Russian moves in Syria have raised important questions about the American relationship with another crucial ally against the Islamic State: Iraq.

With about 3,500 American advisers, trainers and other military personnel in his country, Prime Minister Haider al-Abadi of Iraq has cast himself as a vital member of the United States-led coalition to combat the Islamic State.

However, the Shiite-dominated Iraqi government, which has long been anxious that ousting Mr. Assad might strengthen the Islamic State, has also quietly enabled the Russian military buildup in Syria. While Bulgaria closed its airspace to Russian transport planes headed to Syria at the request of the United States, Iraq has allowed the Russian flights in its airspace.

“We did not violate any of our commitments toward the international community,” Ibrahim al-Jafari, Iraq’s foreign minister, said when he was asked about the Russian flights on Friday at the Council on Foreign Relations.

The Iraqi military statement said that Russia, Iran, Syria and Iraq would “participate in collecting information about ISIS terrorism,” an arrangement it said was important because of concerns that thousands of volunteers who have joined the Islamic State have come from Russia.

American officials sought to play down the significance of the agreement but objected to the Syrian government’s participation in the intelligence sharing.

“We do not support the presence of Syrian government officials who are part of a regime that has brutalized its own citizens,” Col. Steven H. Warren, a Baghdad-based spokesman for the American-led coalition, said.

But some experts say that Iraq’s response to the Russians reflects the fractured nature of decision-making in Baghdad, its attempt to navigate a middle ground between the United States and Iran and that the Iraqi government has a divergent reading of how to deal with Syria.

“Power and authority in Iraq have become increasingly diffused, with various players now exercising unilateral power over the use of force,” said Ramzy Mardini, a nonresident fellow at the Atlantic Council.

“Neutrality is the best Washington can hope for in Baghdad,” Mr. Mardini said. “Iraq is still a fragile state whose leaders are exposed to politics. In the discourse of Iraqi politics, forcing Abadi to side with the U.S. against Assad is like realigning him with the Sunni axis against the Shia one.”