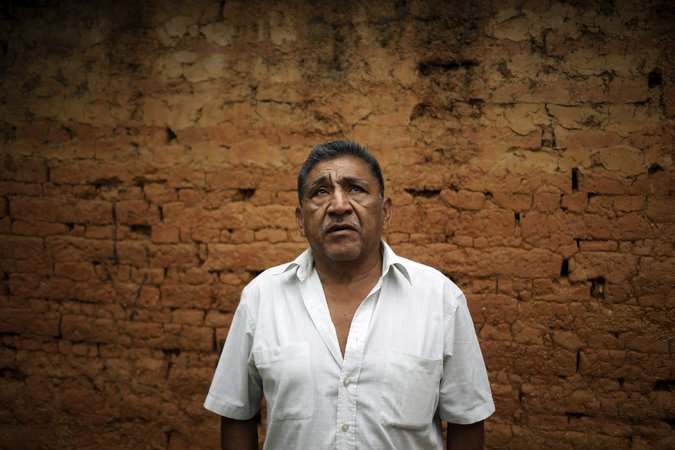 Ezequiel Mora, whose son, Alexander, was among 43 students who went missing a year ago. The body of only one of the students has been identified.Credit Jorge Dan Lopez/Reuters

MEXICO CITY — As a Catholic, Ezequiel Mora was torn over what kind of Mass to offer for his missing 21-year-old son, who vanished a year ago with 42 other college students in southern Mexico.

He could, as some friends suggested, admit that Alexander was dead, as federal prosecutors have said, and offer a Mass for the departed. Or he could preserve the hope that his son is still alive somewhere, and merely pray for his safe return.

“I don’t know what to think,” Mr. Mora said the other day, his face weathered and hair far grayer than a year ago. “I go from feeling despair to feeling hope, from one moment to the next.”

Through it all, the day-to-day reminders of his son’s disappearance keep the loss fresh: no extra hands to repair their old taxi, a fragile grandmother who still does not know that he is gone, a daughter without her closest sibling.

Such is the color of grief shared by the families of the missing, who have come here this weekend from their villages to denounce the disappearance of their sons, all students at a teachers’ college in Ayotzinapa, in rural Guerrero State. Snatched from buses by the police in Iguala, the students were handed to a drug gang and never seen again.

Exactly one year later, the facts are as scattered and unknown as the whereabouts of the victims. Remains of just one of the students have been identified with certainty, those of Alexander Mora. Investigators know neither the location of the remaining 42, nor what happened to them. The case struck a nerve with the Mexican public, a tragic distillation of the tangle of corruption and complicity that governs life in parts of Mexico. In this case, the suspected involvement of local law enforcement and powerful drug gangs tore open the lives of 43 families whose children were studying to become rural teachers.

An outside panel of experts that reviewed the investigation concluded that the night the students disappeared, federal police and army officers were aware of the violence and did not intervene.

On Saturday, at least 50,000 marched through the city to commemorate the tragedy. Bearing banners and chanting antigovernment slogans, the parents of the missing were once more lifted by the voices of others, their cause back at center stage.

Epifanio Alvarez, the father of another missing student, appreciated the “solidarity and support” of the thousands of people who braved the rain and joined the march to demand justice.

“We are not here to cry, nor to cause pity, we are here to demand our sons to be returned alive!” he said.

The initial public anger over the case has given way to a profound cynicism, one that has dragged the president’s poll numbers down to the lowest for any president in two decades. The case in Iguala marked the beginning of a slide in credibility for this government that has continued ever since.

Unrelated embarrassments in the last year have only heightened the cynicism, including the escape of the country’s most notorious drug lord from a maximum-security prison and questionable loans taken by the president’s wife from a state contractor.

“Mexico is not the same after Iguala,” Luis Raúl González, the president of Mexico’s National Human Rights Commission, said in a statement in July. “The tragedy transcends Guerrero.”

On Thursday, the parents met with President Enrique Peña Nieto, asking him, among other things, to pursue the lines of investigation raised by the outside panel, which said it found no evidence to support the government’s conclusion that the students were killed by the drug gang and their bodies then burned to ashes in a garbage dump.

The president agreed to create a specialized prosecutors’ unit for missing people and reminded the parents that 111 people had been arrested in the case.

“We want the same thing, to know what happened to each of their sons and for there to be justice,” the president said in a Twitter post after the meeting.

On the surface, that is not Mr. Mora’s problem. Experts agree that his son’s DNA matched that from a charred bone fragment found at the garbage dump. But fed by the improbable hope of the other 42 families, Mr. Mora has been pulled between science and faith.

After a first DNA match from an Austrian laboratory eight months ago, Mr. Mora stayed home for weeks in the tiny village of El Pericón, in Guerrero.

He mourned. He drank. He stopped driving his taxi on the dirt roads of the sierra. He halted work on his corn crop. Friends and neighbors tried to comfort him in his two-room cinder-block home, where an altar to Alexander covers one wall.

But the fellow parents of the students began to visit him and urge him to join their cause. The government and others could be wrong about the evidence, they said. He began to believe.

His fellow taxi drivers urged him to be realistic. “ ‘Your son is dead, face it and go back to work,’ is what they used to tell me,” he recalled. “I asked them to understand my need to believe he might still be alive.”

Joining the cause, though, has often seemed futile.

On a recent sunny morning, Mr. Mora stood outside the French Embassy in Mexico City with dozens of other parents chanting: “We are all Ayotzinapa!” and “Alive they took them, alive we want them back!”

He relayed the story of the disappearance to a security guard, who merely looked puzzled. Later that day, Mr. Mora joined the rest of the parents, students and several hundred others for a march along Reforma Avenue, a main thoroughfare in the capital.

It was a long way from the protests a year earlier, when the parents were joined by half a million people. Standing on the sidewalk, Cecilia García, a cook in a nearby restaurant, stopped to watch. “No matter how many protests they do, they are all dead,” said Ms. García, 33, who felt sorry for the parents. “All of this is in vain.”

Despite the mounting cynicism toward the government, Mr. Mora refuses to stop protesting.

As he stood on one of the fanciest avenues in all of Latin America, feeling out of place, he said: “I think sometimes people feel sorry for us, for what happened to us, especially since we are very poor. But only a few of them care.”