I had just cancelled my Blue Apron food-delivery subscription when three words popped up in my news feed this week: Blue Apron Wine.

Writers People like wine. Even more so when it appears at their door, preselected for them and paired with dinner. At least, that’s what Blue Apron is wagering, that consumers will pay $65.99 a month for six 500mL bottles of wine. Could something like this convince me to re-up my Blue Apron meal subscription, a requirement for the add-on wine service?

A little backstory: I first tried Blue Apron in early 2014, part of my research for a column I was writing about food delivery services. And I liked it enough to pay $60 per week for six meals, or, three dinner portions for two people. (There are family options, too.)

It’s easy to chalk up anything having to do with food (or booze) delivery as a service that caters to the oh-so-terribly-busy person with a small kitchen in a large metropolitan area, but the instant gratification economy has become just that - its own economy. Unions have raged, contract workers have sued prominent on-demand startups, and all the while the consumer has become accustomed to one-click immediacy.

Even bigs like Amazon and Uber are getting in on the food-delivery game. In some cases it’s as much a data play for companies as it is about delivery: when you order all of your sustenance through an app, they know what, when, and likely why you’re ordering.

But Blue Apron was different, at least for me. Instead of on-demand delivery of takeout food, the New York-based company ships customers insulated boxes of pre-portioned dinner ingredients, along with recipe cards and educational pamphlets about produce. Putting together a meal still requires a good amount of prep work and chopping, but for 18 months we small-diced, zested and seasoned our way through meal kits, sometimes saving them for weekends, and occasionally letting the ingredients turn to mush in the fridge. For an hour at a time we pretended our crappy galley kitchen counter was a commercial range, one of us envisioning himself Dan Barber, the other sous chef. We genuinely enjoyed turning our pre-sorted ingredients into meals. Americans do have time to cook — don't they?

We ran out of time to cook. I cancelled Blue Apron.

Now a mid-sized cardboard box sits in front of me, a miniaturized version of the Blue Apron food box, the word "wine" in lowercase placed beneath a stencil of an apron. No, I haven’t been drinking while I’m writing this — if I start to spell things like "The Vurge" you’ll know what’s up — but I have tried one of the wines. The service doesn’t kick off for a couple weeks, but Blue Apron sent me a sample kit.* The company says it is representative of what consumers will get, though this box has three 500mL bottles of wine rather than six. Some of these are limited vintages.

The first aspect of this service I wondered about was pricing, even more so than quality or varietals. Sixty-six bucks seems like a lot when you first hear "500mL bottle," a third less than the amount of wine you’d get in a standard 750mL bottle. The idea is that that two people can easily finish it off with a meal and not have the urge to call out of work the next day (and also, not exceed the CDC’s recommendations for daily alcohol consumption). Based on the three bottles I have here and some back-of-the-envelope math, it’s not a bad deal for the consumer, but it depends on how much you’re willing to normally spend on your alcohol. 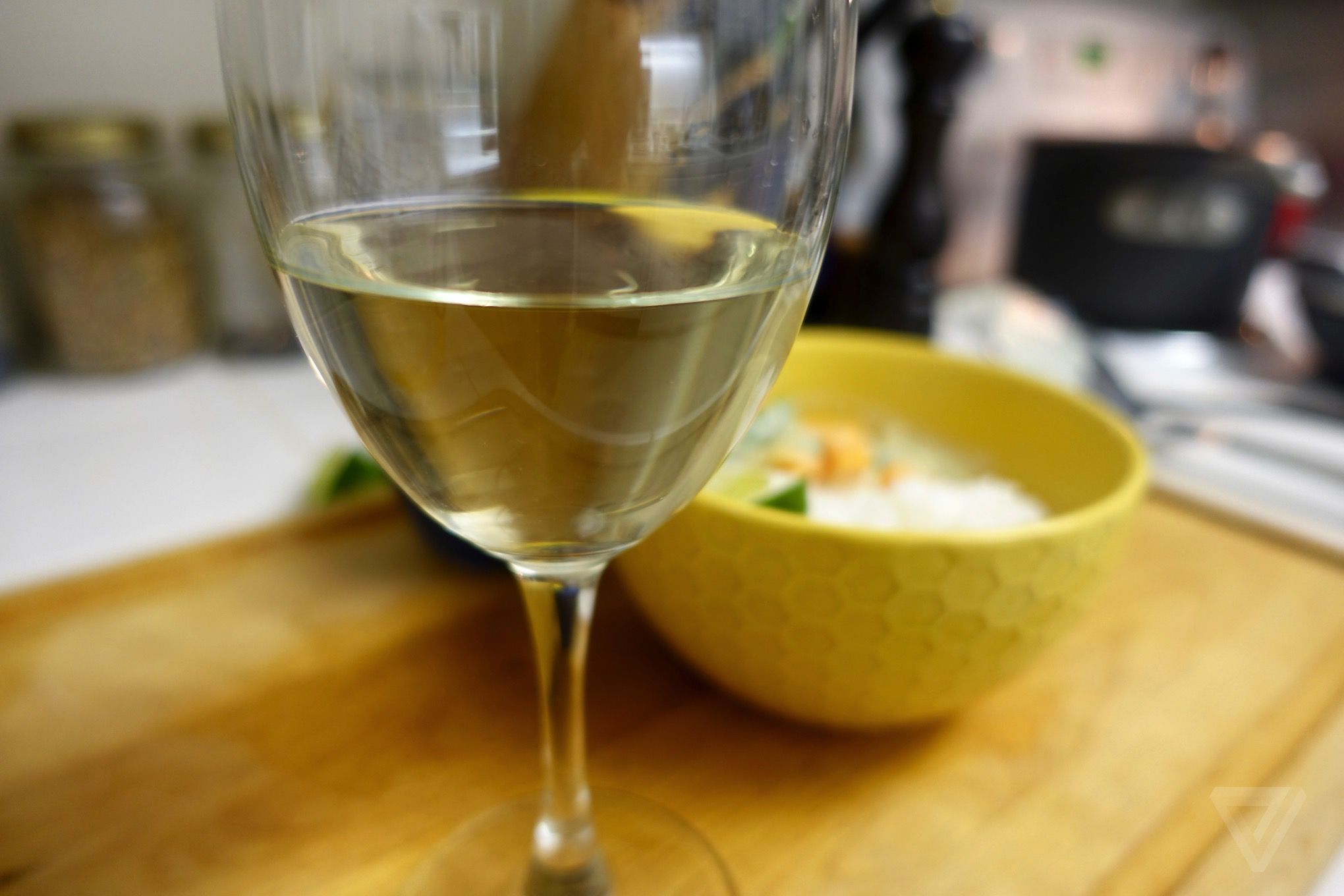 There is also something to be said for the presentation of the Blue Apron-delivered wines. Like the meal kits, the wines come with thoughtful recipe cards, only these show the wine’s label, region, history, the kind of soil it’s grown in, the type of barrel it’s fermented in, the wine’s colors, flavors and aroma... I could keep going, but safe to say, it’s well done. If you’re the person who normally sticks his nose into a wine glass and can’t think of anything to say except, "It kind of smells like my contact solution... maybe a hint of kitty litter," then you’ll appreciate the notes. And, in a clever marketing move, Blue Apron lists on the cards the upcoming meal kits that go with the wines.

But that’s not to say this new offering is uber-convenient — actually, the opposite is true. An adult has to be home to sign at the time of alcohol delivery, which isn’t a fixed time. There are about a dozen states that Blue Apron doesn’t ship wine to, due in part to alcohol delivery laws. Right now you have to subscribe to Blue Apron’s food service in order to get wine deliveries. And there’s even less choice involved with the wine than there is with the food. With Blue Apron meal kits, you can at least specify whether you’re vegetarian, pescetarian, or an omnivore. With wine, you can’t choose at all. For people who want the company to discover new stuff for them, that won’t matter. For others, it will.

If the goal is to get Americans to cook more, wine might not be the solution

If it is immediacy you’re looking for, there are a few other services that will deliver your booze to you on demand, minus the fancy curated experience. For example, Drizly, a Boston-based startup that serves more than a dozen metropolitan areas, claims an average delivery time of 32 minutes.

Ultimately the biggest question I have is: Why wine? There may be a business case to be made for packaging and delivering 500mL bottles of wine from select vineyards in bulk (I can’t help but imagine an investor urging the company to do so). Matt Salzberg, Blue Apron's co-founder and CEO, says that Blue Apron customers have been asking them to sell them wine pairings consistently since the start of the business. "We think it's a market we can serve very well," he said.

Business aside, there are many things I would love to see Blue Apron do. Like offer a simplified version of its meals that are easier to prep and are still healthy. Or reducing packaging, just a little bit. America’s food problems are broad; it would be great if even more companies focused on tackling those.

Still, I’m intrigued enough by Blue Apron Wines that I may re-subscribe to the food kits, and try it for awhile. We’ll see. Maybe if I have the time.

*As part of our ethics policy, we don’t accept gifts or keep any products of value. Since perishables are unreturnable, I have made a donation of $65.99 — the same price as a Blue Apron wine shipment — to Second Harvest, a local food bank.