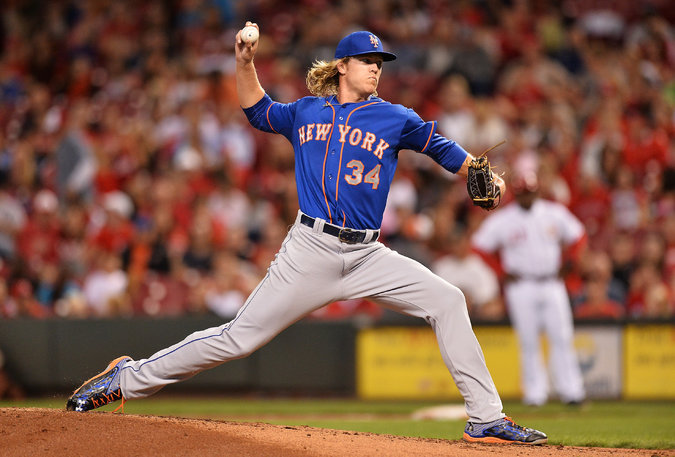 The Mets’ Noah Syndergaard gave up two runs and five hits and registered 11 strikeouts in seven and two-thirds innings against the Reds to pick up his ninth win.Credit Jamie Sabau/Getty Images

CINCINNATI — If the Mets are on the verge of clinching the National League East title here this weekend, ballpark employees plan to prepare for the celebration while the Mets-Reds game is still going on. They will remove the furniture from the visiting team’s clubhouse, cover the room in plastic, and stock tubs with ice, beer and champagne.

The plastic is already at the park, ready to be reused from previous celebrations. The beer and champagne have been ordered, too, Mark Stowe, the Reds’ visiting clubhouse manager, said Friday afternoon. He seemed unconcerned about the Mets’ history of late collapses, or how cautious they had been to not get too far ahead of themselves.

Even the most cynical Mets fan could deny that no longer after the Mets pounded the Reds, 12-5, on Friday night, behind two three-run homers from Lucas Duda and seven and two-thirds strong innings from Noah Syndergaard. The 2015 Mets, a well-rounded team built on a stout offense and strong starting pitching, have proved to be nothing like their predecessors.

Because the Washington Nationals lost, too, this win lowered the Mets’ magic number to one, with eight games left. One more win, or one more Nationals loss, and the Mets will clinch their first playoff berth since 2006 and release nine years of pent-up anxiety. They have clinched at least a tie for the N.L. East title. Behind closed doors, a cheer came from the Mets’ clubhouse late Friday, and music thumped through the room.

“We got our horse tomorrow, Harvey, on the mound,” Syndergaard said, referring to Matt Harvey. “I have a pretty good feeling after that we’re going to celebrate. So it’s an unbelievable feeling.”

That was as close as the Mets came to celebrating Friday. Manager Terry Collins was again reluctant to discuss the playoffs, except when he gushed about Syndergaard, the rookie, and how he would be starting in the Mets’ postseason rotation, and how much he had grown.

For a stretch this season, Syndergaard had struggled so much on the road that Collins had been asked if he would pitch Syndergaard primarily at home in the playoffs. Searching for answers, the Mets tinkered with Syndergaard’s pregame routine. It became a theme, something he was asked about after every road start. His coaches suspected it might be a mental issue.

The Mets skipped one of Syndergaard’s starts this month and gave him 12 days off to help keep him within his innings limit. Syndergaard said the break helped clear his head. In his next road start, he held the Atlanta Braves to one run and two hits in seven innings.

This start here was Syndergaard’s second road start since that break, and he looked just as dominant, even against the Reds’ formidable offense. At his coaches’ urging, he mixed in his off-speed pitches, and had great success. He kept Joey Votto, Brandon Phillips, Jay Bruce and Todd Frazier hitless. At one point, Syndergaard retired 16 consecutive batters. He had 11 strikeouts, two shy of his career high. He most likely would have thrown eight shutout innings had he not allowed a home run to his second-to-last batter.

“This kid’s really gotten better,” Collins said. “I hope he learned a lot from tonight.”

Collins had pointed out before the game that Syndergaard had pitched one of his best games all season on the road against the Los Angeles Dodgers, the Mets’ likely opponent in the National League division series. Syndergaard stymied the Dodgers, limiting them to one run in six innings and leading the Mets to a win over Clayton Kershaw.

Collins’s point: Syndergaard has the ability to thrive in that kind of setting.

The Mets’ offense also looks as if it might be able to contend with Kershaw and Zack Greinke, the Dodgers’ dominant starters. On Friday, seven different Mets collected at least two hits, and eight different Mets scored a run. But Duda’s emergence was the most encouraging sign, because the Mets had expected him to protect Yoenis Cespedes in the order and he had been slumping recently after returning from a back injury.

The six runs Duda batted in were a career high. He muscled his first home run to the opposite field, then crushed his second one to right field about 441 feet — a good sign for the Mets, because his home runs tend to come in bunches.

“The timing’s coming back,” Duda said.

Still, no matter how pleased Collins was with Duda, Syndergaard and the win, he refused to celebrate. He still had much to worry about, like nursing his starting pitchers and his bullpen to the finish line.

Juan Uribe left the game after aggravating a chest injury he sustained earlier this week. Terry Collins indicated Uribe would be out at least a few days.