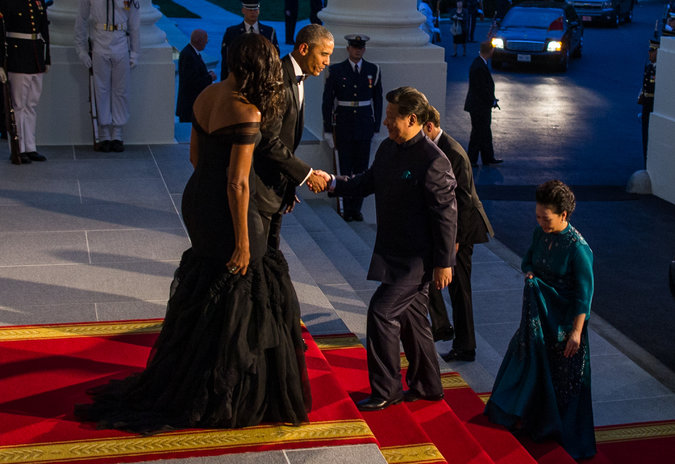 WASHINGTON — In a reflection of just how important Washington’s relationship with Beijing has become, President Obama on Friday held his second state dinner for China, the only country to receive such a double honor from him.

And the guest list reflected just how important Beijing is to America’s titans of technology. The guests included Mark Zuckerberg, who is trying to persuade the Chinese government to lift a ban on Facebook, the company he founded, and Tim Cook, the chief executive of Apple, which sells more iPhones in China than in any other country.

Mr. Zuckerberg, Mr. Cook and Mr. Nadella were seated at the head table with Mr. Obama and President Xi Jinping of China. The tech executives arrived just hours after Mr. Xi said in a news conference that his nation and the United States had reached consensus on a “joint fight against cybercrimes.” American officials have accused China of stealing millions of personnel records from federal computer systems.

In his toast, Mr. Obama acknowledged differences with the Chinese but said a history of cooperation dated back decades. “Just as you say in China that a sea accepts a hundred rivers, our countries together are stronger when we accept the diversity of the views and the contributions and uphold the rights of all our people,” Mr. Obama said. Mr. Xi responded by calling for a new chapter in relations between the two nations.

For this China state dinner, much about the evening was different, including the president being honored — the previous dinner, in 2011, was for President Hu Jintao — and the issues at stake. But poached Maine lobster was again on the menu, along with traditional rice noodle rolls embedded with spinach, shiitake mushrooms and leeks.

The White House invited Anita Lo, the chef and owner of Annisa in New York, to serve as a guest chef, an interesting choice since Ms. Lo’s ancestry is more Chinese than her food. But perhaps more important than her connections with China were Ms. Lo’s bona fides as one of the hottest chefs of the moment.

“Foodies worship the ground she walks on,” said Cindi Leive, editor in chief of Glamour magazine.

The main course featured one of Ms. Lo’s signature creations — garlic fried milk, a crunchy and smooth Cantonese garnish for the grilled Colorado lamb. Ms. Lo’s favorite childhood meal — the one her mother always made for her birthday — was steamed lobster, she said in a recent interview.

Diners were seated at tables overflowing with flowers and settings that each had seven utensils and four wine glasses.

“It’s the kind of setting that’s just not done anymore, and it gives me huge nostalgia to see it,” said Will Guidara, co-owner of the restaurant Eleven Madison Park in New York.

After the dinner, guests were to be entertained by the singer Ne-Yo. But much of the Chinese delegation was to miss the entertainment because of a flight to New York that was scheduled to leave around 10 p.m.

Among the other invited guests were Misty Copeland, a principal dancer of the American Ballet Theater, and Mark Cuban, the flamboyant owner of the Dallas Mavericks.

The first lady, Michelle Obama, managed to surprise her admirers again with a red carpet appearance in an off-shoulder black dress, designed by Vera Wang, and a hairstyle that harked back to the 1940s.

“Looks pretty good, don’t she?” Mr. Obama asked as the first couple emerged from the White House to greet Mr. Xi and his wife, Peng Liyuan.

Kate Betts, author of a book on Mrs. Obama’s style choices, said she was surprised that Mrs. Obama had chosen to wear black instead of the red she wore to the last state dinner honoring China. But even more surprising was a cascading wave of hair down one side of her face, Ms. Betts said.