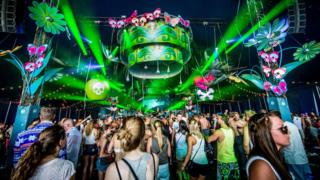 From music festivals to corporate expos, trade fairs to charity auctions, we spend about £375bn a year on events worldwide - £40bn of that in the UK.

It seems we gregarious humans still love to press the flesh, chat in person and see things for ourselves, despite the availability of online collaboration tools, teleconferencing and email.

And technology is "transforming the meetings and events space," says Mr Aggarwal. "It's a market ripe for automation."

Going digital has enabled organisers to send out invitations via social media, email and mobile, and provide attendees with a more integrated registration, travel and hotel booking experience.

"We've seen two major changes in the space since we started [in 2006]," says Renaud Visage, co-founder of San Francisco-based Eventbrite, a tech firm that offers an events organising platform.

"Social media, which is very important for marketing, and mobile, which can be used for event apps and for checking-in attendees."

The company has grown fast, processing about $3bn (£2bn) worth of tickets and powering a million events last year, says Mr Visage.

Innovations include dynamic pricing for online seat reservations, depending on where they are in the venue, and the ability to sell merchandise around the event as well.

One company benefiting from event technology is Children's Inn, a charity providing accommodation for kids suffering from the rarest forms of disease.

Lauren Stabart, assistant director of corporate giving and special events, told the BBC: "Our service costs millions of dollars a year to run, so raising money from sponsors and ticketed events is essential for our survival.

"Cvent helped set up our webpage event management platform, where people can purchase tickets and we can offer special promotions, discounts and so on.

"Moving from paper-based registration to digital - checking people into events on tablets - was just so seamless and easy," she says.

Organisers' guest lists are updated automatically so everyone has access to the same information on their hand-held devices.

Technology is also helping to make the events more interactive, she says, with features like "social wall", which projects live tweets onto a wall for guests to read during the event.

Since it was founded in 1990, the charity, based in Bethesda, Maryland, has given a temporary home to about 13,000 seriously ill children and their families.

There's an app for that

Now when you go to a big conference the prospectus and schedule is likely to be included in a dedicated app, perhaps incorporating video content of the presentations and an interactive map of the venue.

A company like Eventbase, which developed apps for the 2012 London Olympics and the US South by South West (SXSW) music, film and technology festival, specialises in creating these bespoke apps.

At this year's SXSW more than 1,000 iBeacons were installed around the venue. These small devices communicated with Eventbase's smartphone app to establish visitors' exact locations.

This enabled anyone who opted in to the service be found by other visitors - useful for networking and socialising.

If you missed a speech because you were too busy networking or sampling the refreshments, a well-run event will upload it to the app soon after.

"If I hear a great speaker I want to be able to share the recording five minutes later, not two weeks later," says Mr Aggarwal, whose company services 13,000 clients worldwide, including companies like Roche, Rolls-Royce and Yale University.

"With easy access to all the presentations, the event extends beyond the weekend and the content lives longer."

Event apps and location technology also make it easier for brands to showcase their wares online as well as in the venue, and to target certain visitors with specific messages as they move around.

This targeting is helped by visitors detailing their preferences and areas of interest when they register online for the event.

With about 20 million events happening each year, but only 50,000 currently offering attendees an in-conference app, according to industry estimates, this a rich area for growth for tech companies.

Within the venue, internet-connected devices, such as tablets and smartphones, can make for a more interactive relationship with visitors.

Live polling can enliven a presentation, say, and interactive bidding at charity events using technology from the likes of iBid, can help raise more money.

Bidders can see the latest bids on a large digital screen, adding to the excitement and the spirit of competition.

Nowadays events also encourage tweets and social media updates from visitors which are then projected onto "social walls" around the venue. Mr Aggarwal envisages quadcopter drones buzzing round fulfilling this function in future.

And more often, attendee passes and wristbands have RFID (radio frequency identification) and NFC (near field communication) technology built in, so you can log in to interactive displays or register for offers with a simple wave or tap of your device.

Mr Visage believes connected wristbands will also act as digital wallets, allowing festival goers to pay for food, drink and merchandise so they don't have to worry about losing payment cards and cash.

Technology is also playing an increasingly important role in brand marketing at events, where competition for visitors' attention is fierce.

His firm has developed Twitter-activated jukeboxes, LED light displays activated by sound and gesture, and social media integration with NFC-enabled wrist bands, amongst other digital delights.

Virtual reality (VR) headsets will be the next trend at events, he believes.

"At some automotive shows this year there have been more VR headsets than cars," he says.

"Immersive content is going to play a huge role in how brands engage consumers in brand experiences."

Some thought digital technology would kill the live event. Instead, it seems to have given it a new lease of life.