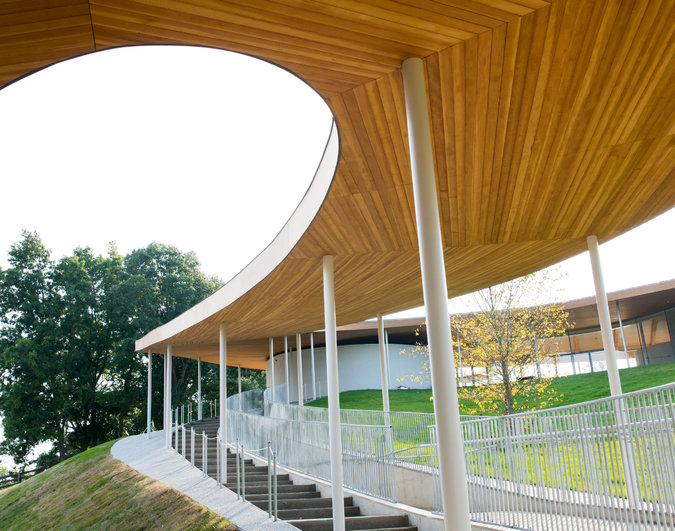 The walkway to the River, the main building of Grace Farms, a community center that houses a library, gymnasium, a mess hall and an amphitheater.Credit Christopher Capozziello for The New York Times

NEW CANAAN, Conn. — A group of friends and neighbors thought that this area could use a new community center with a spiritual underpinning.

So they built one.

But Grace Farms, as the project is called, will never be mistaken for a modest Amish barn-raising. In this corner of Connecticut, budgets are less tight than elsewhere. The nonprofit, tax-exempt Grace Farms Foundation spent around $120 million on the new center — a price that included the purchase of 80 acres of some of the most expensive real estate in the region.

It hired the Japanese architecture firm Sanaa, which later won the Pritzker Prize, to design an ultramodern building that features, among other bells and whistles, five site-specific works by art stars. And the finished complex, which opened on Oct. 9, takes the concept of “multifunctional” to a new extreme: Grace Farms is a nature center, gym, hub for social justice groups, community garden and a part-time ecumenical chapel — and that is only a partial list.

The main building, called the River, is a sinuous form that winds its way down a hill just a few hundred yards from the New York border, with five separate sections. Large glass walls provide views of forests and meadows; its covered roof twists and turns with the landscape.

Sharon Prince, president of Grace Farms Foundation, in front of the River building, a sinuous form that was designed by the Japanese architecture firm Sanaa.Credit Christopher Capozziello for The New York Times

“This is exactly what we hoped for,” said Sharon Prince, the president of Grace Farms Foundation, as V.I.P. visitors and journalists milled for a first look at the 83,000-square-foot building.

The “we” she referred to are well-to-do friends — led by Ms. Prince and her husband, the hedge fund executive Robert P. Prince of Bridgewater Associates — and more than 100 donors. They joined forces to create a hybrid entity that many will find easy to admire in part but that may be harder to comprehend as a whole.

The inaugural weekend activities at Grace Farms, which is open to the public, reflected that wide-ranging vision. Cliffe Knechtle, the pastor of the nondenominational Grace Community Church, gave a blessing. The church occupies a Sanaa-converted barn on the property and holds Sunday services in the 700-seat portion of the River called the Sanctuary. Grace Farms, while a separate entity, was founded by some of the same people who founded the church almost 15 years ago, including the Princes. Then there was a panel discussion featuring artists who have done installations on the site, including Teresita Fernández and Thomas Demand. At night, Krishna Patel, Grace Farms’s director of justice initiatives, discussed the organization’s campaign against child trafficking. Later, the Paul Taylor Dance Company performed.

And that was only the first day. On Saturday, 2,500 people came to sample another busy slate of activities.

“My wife brought me here as a surprise,” said Gordon Schnell, a lawyer who lives in neighboring Westchester County. “It’s gorgeous and inspiring.”

The spiritual aspect of Grace Farms was attractive to Mr. Schnell. “The thing that caught my eye is that they say they welcome people of all faiths, or no faith at all,” he said. “I want to know more about that.”

The project was initially approved partly for religious purposes. The myriad functions of Grace Farms even stumped the architects at first. “When we first met with Sharon, it was difficult to understand what Grace Farms was to be,” Kazuyo Sejima, the co-principal of Sanaa, said in an email. Now that the project is completed, she added, “it is clear that what they had in mind the whole time was a new kind of public space.”

The primary concept was for the building to melt into the landscape. “When we said we want the building to disappear into nature, they lit up,” recalled Ms. Prince of her meetings with Sanaa.

Ms. Prince was admittedly a client with very specific requests. “We asked for no front door — total porosity,” she said. “We didn’t want a threshold that gives you a second thought about entering.”

The Princes are among the donors but they declined to disclose amounts or the names of other contributors. Grace Farms will play host to nonprofit groups to be determined.

Although it will be open to public use, some of the neighbors haven’t always been happy about the project’s scale and subjected the zoning permit to multiple appeals to New Canaan’s Planning and Zoning Commission over six years.

To respond to local concerns, Grace Farms added berms around the property, altered the design of the parking lot and had the traffic tested. An amended permit was approved in 2013.

The mess hall in the River building.Credit Christopher Capozziello for The New York Times

In the end, the naysayers were no match for Ms. Prince.

“It’s hard to tell Sharon ‘No,’ and I say that in an affectionate way,” said Jay Fielden, the editor in chief of Town & Country and a board member of the Grace Farms Foundation. Mr. Fielden, who lives nearby, got to know Ms. Prince when his house burned down; the Princes took him and his family into their home temporarily.

Ms. Prince has an M.B.A. from the University of Tulsa, where she met her husband. While raising their three children, she had also been involved with various businesses as an entrepreneur.

So far, Grace Farms has a staff of 25 but no executive director, and Ms. Prince has been largely filling that role.

“Sharon is the juggernaut behind all this, the heartbeat,” said Peter King Hunsinger, the chief revenue officer of Golf Digest. He and his wife, Jane, are donors to Grace Farms and are among the original core members of Grace Community Church.

“Each step of the process has been informed by the ideals of Christian faith, but it’s not a place that’s about proselytizing,” Mr. Fielden said.

Because of the overlap between the church founders and the movers behind the Grace Farms, Ms. Prince took pains to note their separation. “We’re not building a church,” she said pointedly.

In addition to donating space to nonprofit groups, exposing visitors to art is part of the stated mission, too. The artist Olafur Eliasson, who contributed a site-specific work called “Mat for multidimensional prayers,” said, “Once I looked at the project, I realized it overlapped with my sense of spirituality a great deal.”

Nicholas Wolterstorff, a professor emeritus at Yale who has written widely on theology, reviewed the plans for Grace Farms and said the crosscurrents coming together made it noteworthy.

“In the olden days, most art was connected to the church, except for the aristocracy,” Mr. Wolterstorff said. “Here,” he added, “by putting them under the same roof, they are separate but together.”

Those close to the project acknowledged that its lack of a single focus was the biggest hurdle.

“In this robust celebration, how does one specify one’s ambition?” said Miroslav Volf, a theology professor at Yale who is on the foundation’s board. “It will require constant attention to carry the vision through the entire project.”

Fatou Niang, a local real estate agent attending the opening, said she saw Grace Farms simply as a local attraction. “It’s an extra element for the city, to bring people who see New Canaan as a retreat,” she said. “We have the Philip Johnson Glass House, and now this.”