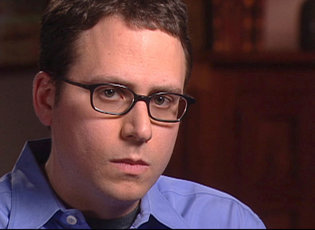 Stephen Glass, a former writer for The New Republic, appeared on CBS's "60 Minutes" in 2003 to discuss his fabricated articles.Credit CBS NEWS, via Associated Press

Stephen Glass, one of journalism’s most infamous fabulists, sent Harper’s Magazine a check for $10,000 this week as repayment for a discredited article he had published there in 1998, and said he planned to repay other publications that ran his fabricated work.

“I want to make right that part of my many transgressions,” he wrote in a letter to current and former magazine employees. “I recognize that repaying Harper’s will not remedy my wrongdoing, make us even, or undo what I did wrong. That said, I did not deserve the money that Harper’s paid me and it should be returned.”

Reached by email on Friday, Mr. Glass said he also planned to repay other outlets — a total that, by some estimates, could run into the hundreds of thousands of dollars. He declined to comment further.

Mr. Glass was a rising star in journalism in the late 1990s, known for vivid features at The New Republic, where he was an associate editor, and other magazines. His work included an article in the February 1998 issue of Harper’s about his experiences becoming a phone-in psychic.

Continue reading the main story Document “I want to make right that part of my many transgressions,” Mr. Glass wrote in a letter to current and former staffers at Harper’s magazine.

Later that year, after an editor at the website Forbes Digital Tool raised questions about one of his articles about computer hackers, he was revealed as a serial fabricator. The New Republic said that some of his articles were completely made up, while others were partly so. The story of his fabrications, and their uncovering, was made into a 2003 movie, “Shattered Glass.”

Mr. Glass wrote a novel called “The Fabulist,” and in 2004, he moved to California, where he became a clerk for a law firm. He passed the bar exam in 2006, but he was found morally unfit to practice law in 2009. An appeal to the California Supreme Court failed last year, when the court ruled that he had “failed to carry his heavy burden of establishing his rehabilitation and current fitness.”

That ruling noted that, roughly between 2001 and 2004, Mr. Glass had sent about 100 handwritten letters of apology to those affected by his fabrications.

Giulia Melucci, a spokeswoman for Harper’s, said that Mr. Glass had sent at least one previous letter of apology to the magazine. She said that the magazine’s publisher, John R. MacArthur, has been asked more than once to vouch for Mr. Glass as a candidate for admission to the California bar. He has declined. But the magazine will be depositing the check Mr. Glass sent, she said.

The letterhead Mr. Glass used to communicate with Harper’s says he is now the director of special projects for the law firm Carpenter, Zuckerman and Rowley. It also has a line under his name that reads “Not an Attorney.”