Clashes in West Bank and Jerusalem

Palestinian protesters and Israeli soldiers clashed in the West Bank and Jerusalem after Palestinians set fire to a Jewish shrine and carried out stabbing attacks on Israelis.

JERUSALEM — Dozens of Palestinians set fire at dawn on Friday to a holy site known as Joseph’s Tomb, in the Palestinian Authority-controlled city of Nablus in the West Bank, damaging the tiny stone compound that many Jews believe is the burial place of the son of the biblical patriarch Jacob.

The fire punctuated another day of anti-Israel protests by Palestinians in parts of the occupied West Bank and in Gaza that left at least four dead and dozens injured.The violence drew the increasing concern of the United States, with President Obama and Secretary of State John Kerry calling for restraint on both sides but also defending Israel’s right to protect its citizens.Mr. Kerry spoke by telephone with Prime Minister Benjamin Netanyahu of Israel and President Mahmoud Abbas of the Palestinian Authority, the State Department said. It also said Mr. Kerry would probably meet with Mr. Netanyahu in Europe in the coming days. The date and location have not been set.The arson fire at Joseph’s Tomb has reinforced fears that the latest surge in Palestinian-Israeli strife is acquiring religious overtones.Photo 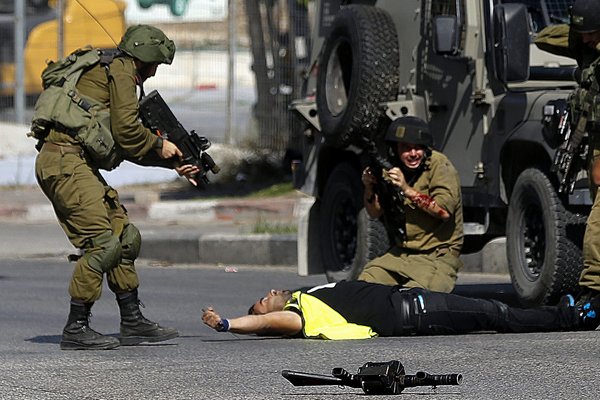 A Palestinian posing as a news photographer was killed after stabbing an Israeli soldier on Friday at a checkpoint in the Hebron area of the West Bank.Credit Abed Al Haslhamoun/European Pressphoto Agency

Dore Gold, the director general of the Israeli Ministry of Foreign Affairs, said in a statement, “The Palestinian attack on Joseph’s Tomb reminds us of the actions of the most extreme Islamist elements, from Afghanistan to Libya.”

The Israeli military said Palestinian forces had extinguished the blaze.

President Abbas condemned the arson as irresponsible in a statement published by the official Palestinian news agency, Wafa. The extent of the damage was unclear, and there was no immediate word of any arrests.

Jewish pilgrims visit the site, adjacent to the Balata refugee camp, a hotbed of Palestinian militancy. The pilgrimages, about once a month, are made under the cover of night, with Israeli military escorts, but none were underway when the fire broke out.

The desecration was met with outrage in Israel. It follows a wave of Palestinian stabbing attacks against Israelis, as well as deadly clashes between Palestinians and Israeli security forces.

The latest violence has been prompted, in large part, by a dispute over Al Aqsa Mosque compound, a contested holy site in Jerusalem revered by Jews as the Temple Mount and by Muslims as the Noble Sanctuary.

The Palestinians have accused Israel of plotting to change a decades-old arrangement under which non-Muslims are allowed to visit the site, but not to pray there. Israel repeatedly has denied such accusations. Palestinian leaders have also said Israel risks turning the political conflict into a religious war.

As part of an Israeli security crackdown, police officers and soldiers are patrolling Israeli cities, and roadblocks have been placed at the entrances of many Arab neighborhoods in Jerusalem, where the mood was grim and the streets quiet.

Palestinians declared Friday a “day of rage” against Israel.

At a checkpoint in the Hebron area, a Palestinian man posing as a news photographer stabbed an Israeli soldier, who survived, according to the military. Israeli forces shot and killed the assailant, and photographs showed him on the ground wearing a yellow vest and a shirt with a large “press” sign.

After midday prayers, protests broke out at friction points across the Israeli-occupied West Bank and along the Gaza border fence.

A Palestinian was killed in clashes with Israeli forces at a checkpoint in Nablus, Wafa reported. It identified him as Ehab Hanani, 19.

Two Palestinian men, Yehya Farahat, 20, and Mahmoud Hmeid, 22, were fatally shot by Israeli forces near the Gaza fence, and more than 100 were injured, according to Health Ministry officials in Gaza. Hamas, the group that dominates in Gaza, identified Mr. Farahat as a member of its military wing. 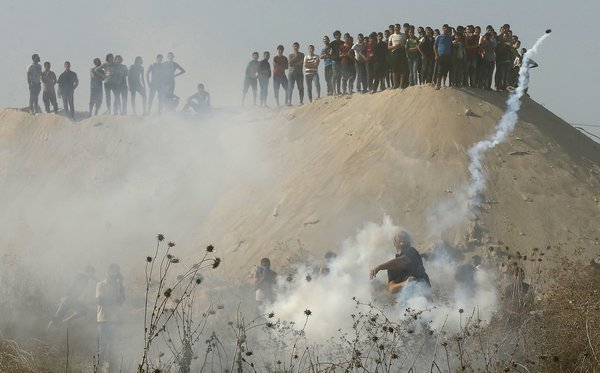 A Palestinian protester threw back a tear gas round fired by Israeli troops in clashes on Friday near the Gaza-Israel border.Credit Mohammed Salem/Reuters

The Israeli military said hundreds of Palestinians had gathered along the border fence, breaching the buffer zone, throwing rocks, rolling burning tires and seeking to damage the fence. The military said it was using riot dispersal equipment and firing toward the main instigators.

Israeli forces fatally shot nine Palestinians during clashes along that border last weekend. A 10th, Shawki Obeid, 37, died of his wounds on Friday.

This time forces from Hamas turned away protesters and reporters in some areas close to the border fence. But the protesters reached other points along the border.

“We want to demonstrate, despite their decision to prevent us,” said Mohammed Eleyan, an organizer of the protests, speaking by telephone from the border area near Nahal Oz. “We want to resist for Jerusalem, like its people who are dying and giving their souls for the homeland.”

The Israeli military said it would repair Joseph’s Tomb so worshipers could resume visits.

Lt. Col. Peter Lerner, a spokesman for the military, described the attack as “a blatant violation and contradiction of the basic value of freedom of worship.” He said the military would take “all measures to bring the perpetrators of this despicable act to justice.”

Mr. Abbas promised to establish a committee to investigate the arson and called on “responsible parties” to complete the restoration quickly.

Violence in the Middle East

Seven Israeli Jews have been killed and dozens injured in more than 20 violent attacks by Palestinian assailants since the beginning of the month.

At least 37 Palestinians have died in the violence, with more than a dozen killed by Israeli security forces and citizens in connection to reported attacks on Israelis.

Yossi Dagan, the leader of the Samaria Regional Council, which represents the Jewish settlers in the northern West Bank, called for the Israeli military to protect the tomb.

Mohammad Abdel Jawwad, 18, a carpenter who lives in the Balata camp, said he was sitting with friends when he heard about the fire and rushed to investigate.

“By the time we got there, Israeli soldiers had surrounded the entire area and were already clashing with the youth,” said Mr. Abdel Jawwad, who went to a hospital to seek treatment for a wounded hand.

Under the Israeli-Palestinian agreements of the mid-1990s known as the Oslo peace accords, Israel withdrew from Nablus and the other Palestinian cities but was assured free access to Jewish holy sites. The Israeli Army turned Joseph’s Tomb into a fortified post, and a small yeshiva continued to operate there.

The tomb became the site of tensions, and in 1996, six Israeli soldiers were killed there during riots by Palestinians. After the second Palestinian uprising broke out in September 2000, the tomb was the scene of a battle in which 18 Palestinians and an Israeli border police officer were killed.

To avoid further tensions, the army vacated the tomb and turned over protection of the site to the Palestinian police.

Joseph is considered a prophet in Islam, and some Muslims declared the tomb a holy site and painted its dome green. Others believe that the compound is actually the tomb of a Muslim sheikh called Yusef, the Arabic equivalent of Joseph.

But to many Jews, Nablus, which has a population of more than 120,000, is the site of the ancient city of Shechem and part of their biblical birthright. The tomb, they believe, sits on the parcel of ground that Jacob bought for a hundred pieces of silver, according to Joshua 24:32, an inheritance of the children of Joseph.