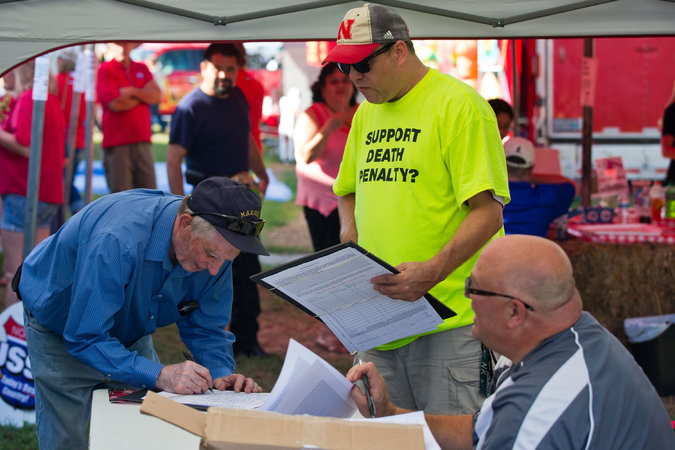 Darrel Marshall, left, signed a petition in favor of a statewide referendum on keeping the death penalty while Brian Bierschenk, center, read him the required statement at the Madison County Fair in Madison, Neb., in July.Credit Chris Machian for The New York Times

More than four months after the Nebraska Legislature voted to abolish the death penalty, a petition drive by supporters of capital punishment in the state has succeeded in upending that vote and suspending the new law, the secretary of state’s office announced Friday.

The petition drive, which collected more than 143,000 verified signatures from across the state, will force a statewide referendum in November 2016, when Nebraska voters will decide whether the state should have a death penalty.

The announcement was a clear victory for Gov. Pete Ricketts, a vigorous supporter of capital punishment and a major financial contributor to the petition effort. It was a blow to the coalition of legislators who argued in emotional hearings at the state Capitol in May that the death penalty system in Nebraska was inefficient, expensive and immoral.

But it also opened up new uncertainties surrounding the death penalty in Nebraska: With the repeal law suspended, would prosecutors once again seek the penalty when trying murder cases? Could the governor’s so far fruitless efforts to obtain lethal injection drugs succeed? And could an execution take place in the more than yearlong interim before the statewide referendum on the issue next November, as Nebraskans continue to be roiled by a debate over the death penalty?

“The thing is a total mess,” said Eric Berger, a law professor at the University of Nebraska, Lincoln, who has written extensively on capital punishment. “It’s uncharted territory for everybody.”

Mr. Berger said that even the current status of the 10 men on death row — including whether they are legally on death row at all — could be seen as uncertain. “My guess is that this would ultimately be a losing argument,” he said, “but there’s at least a nonfrivolous argument that they could not be executed because their death sentences had been removed.”

Complicating matters further is a significant legal challenge that could invalidate the petition drive. In September, opponents of the death penalty filed a lawsuit against John Gale, the Nebraska secretary of state, arguing that Governor Ricketts should have been listed as a sponsor of the petition effort, as required by Nebraska law, given that he was a major financial contributor to the signature drive. The lawsuit says Governor Ricketts “personally and/or through his close advisers and agents managed, organized and controlled the referendum campaign.”

Governor Ricketts personally donated $200,000 to Nebraskans for the Death Penalty, the group that organized the petition drive.

A second lawsuit filed in September said the language on the petition drive was “unlawfully misleading.” The lawsuit, which names Mr. Gale and Doug Peterson, the attorney general, says that the question posed to voters through the petition drive inaccurately suggests that the death penalty could be replaced with a sentence less than life imprisonment.

Laura Strimple, a spokeswoman for the secretary of state, declined to comment on the continuing litigation.

Chris Peterson, a spokesman for Nebraskans for the Death Penalty, said in an email that over the next several months, the group planned to “defend the successful petition drive from frivolous litigation by our desperate opponents, and work to ensure that Nebraska voters have their voice heard on this important criminal justice issue.”

The death penalty has not been used in Nebraska since 1997, partly a reflection of Nebraskans’ uncertainty about the measure, said Robert Dunham, the executive director of the Death Penalty Information Center in Washington.

“There has been for 20 years a great deal of ambivalence about the death penalty in Nebraska,” Mr. Dunham said. “There has been substantial support for abolition, and there have been governors who have been in support of retaining it.”

Until Mr. Ricketts became governor, he said, previous governors “have expressed support for the death penalty, but they have not pushed to execute.”

In recent years, state officials have found it impossible to obtain sodium thiopental, a barbiturate used to administer lethal injections. In 2011, the sole manufacturer of sodium thiopental in the United States ceased making the drug.

Mr. Ricketts’s administration recently tried to buy $50,000 worth of sodium thiopental from a distributor in India, but the shipment was returned to the sender. The Food and Drug Administration warned that importing the drug was illegal.

Nebraska allows for a lengthy appeals process, making it possible for inmates to remain on death row for decades. One inmate, Carey Dean Moore, arrived on death row in 1980 after being convicted of killing two cabdrivers in Omaha.

Opponents of the death penalty vowed to fight until the referendum. Matt Maly, coordinator for Nebraska Conservatives Concerned About the Death Penalty, said the group planned to hold events in churches and schools to tell voters about “the facts of the broken death penalty system.”

But he said Mr. Ricketts’s continued inability to obtain the necessary drugs for an execution kept the situation relatively unchanged.

“There certainly is a little bit of ambiguity right now,” he said. “But in reality, it’s not affecting very much at all. We haven’t executed anyone in 20 years and don’t have the drugs for it. Nobody’s going to be executed in Nebraska anytime soon.”