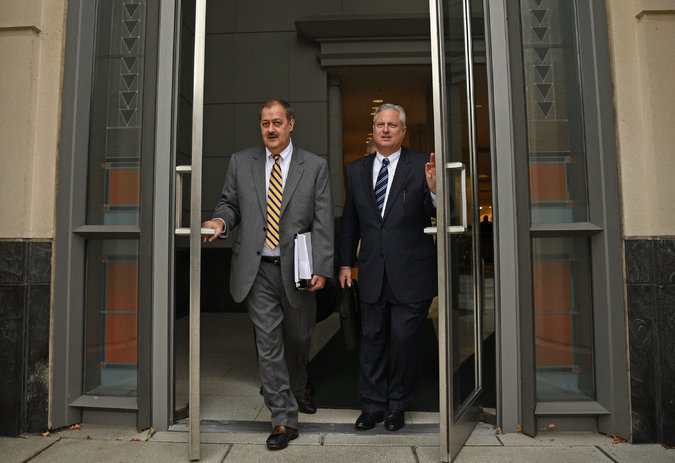 Donald L. Blankenship, left, leaving the federal courthouse in Charleston, W. Va., this month on the first day of jury selection. Mr. Blankenship, the former chief executive of Massey Energy, faces up to 31 years in prison if convicted on charges related to a coal-mine explosion that killed 29 of his employees.Credit Tyler Evert/Associated Press

CHARLESTON, W.Va. — Back when he was one of the most powerful and feared men in West Virginia, before a coal mine explosion killed 29 of his employees and exposed his company’s shoddy safety record, Donald L. Blankenship was seen as an arrogant, micromanaging bully. Even his lawyer says he was “rude and insulting.”

But in the end, another of his qualities — his penchant for secretly recording his own conversations — may help bring Mr. Blankenship down.

Mr. Blankenship is the former chairman and chief executive of Massey Energy, whose Upper Big Branch mine became, in April 2010, the site of the nation’s deadliest coal mining disaster in nearly 40 years. Now on trial in federal court here, he is the first coal baron ever to face criminal charges — the central character, prosecutors say, in a historic case of conspiracy to flout health and safety laws in pursuit of profits.

Defense lawyers say they will prove that Mr. Blankenship was deeply concerned with mine safety, and that he had committed no “willful violations” of safety laws, as the government asserts. 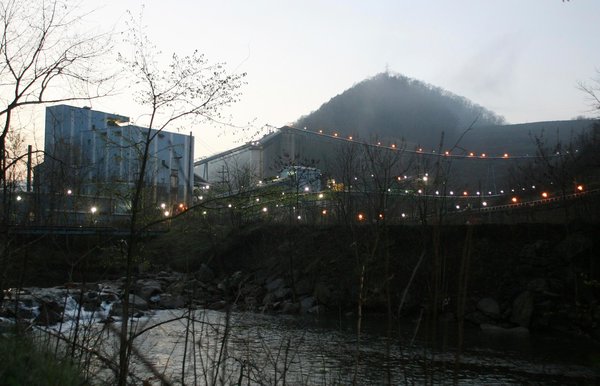 An entrance to the Upper Big Branch mine in Montcoal, W. Va., on April 6, 2010, one day after the deadly explosion there.Credit Mike Munden/Reuters

Mr. Blankenship’s rise and fall are the stuff of legend in Appalachia. Raised in a poor county, he built Massey from a family-owned company into an industry behemoth that operated more than 150 mines and brought in $2.6 billion in revenue. As prosecutors make their case against him, they have so far played 19 snippets from hundreds of hours of Mr. Blankenship’s secret audio files, which were turned over by the company that acquired Massey after the blast.

The tapes offer a peek into the mind of a man seemingly consumed with his own wealth and frustrated with federal regulators and company officials who pushed for more attention to safety. The prosecution hopes to offer three more recordings, but on Thursday, defense lawyers asked Judge Irene C. Berger, who is presiding over the case, to block them.

In one conversation, Mr. Blankenship complains that Massey’s top safety official is too concerned with “the social aspects” of her job: “You’ve got to have someone who actually understands that this game is about money.” In another, he frets over a confidential internal safety memo — central to the prosecution’s case — that warned, among other things, of poor ventilation at mines and said Massey was “plainly cheating” in sampling coal dust, a health hazard and a fire accelerant.

He worries how things will look if Massey is sued. “If that was a fatal today, or if we had one,” Mr. Blankenship says, an apparent reference to an accident, “it’d be a terrible document to be in discovery.”

Discussing inspectors from the federal Mine Safety and Health Administration, he complains that they pay too much attention to black lung disease, caused by excessive coal dust exposure. (Autopsies would find that 71 percent of the 29 miners killed at Upper Big Branch suffered from black lung, compared with an industry average of 3.2 percent, according to a 2011 state inquiry that attributed the blast to “a failure of basic coal mine safety practices.”)

“The truth of the matter,” Mr. Blankenship is heard saying, “is black lung is not an issue in this industry that is worth the effort they put into it.”

The recordings also reveal Mr. Blankenship’s clashes with Massey’s compensation committee over a $12 million pay package for him that included stock options. “I said, ‘You can’t go to the grocery store and buy groceries with options,’” he tells a woman he was dating, after remarking that he was glad she liked the flowers he had sent.

Mr. Blankenship, 65, faces up to 31 years in prison on three felony counts, including conspiracy to violate mine safety standards and hide hazards from federal inspectors, lying to securities regulators and misleading investors about safety practices in an effort to maintain Massey’s stock price — and his fortune.

He has denied any wrongdoing.

That he is being prosecuted at all is stunning, given his political clout in a state with a long, sordid history of coal-mine tragedies, stretching back to at least the late 1800s. He spent $5 million to elect one State Supreme Court justice, which prompted a documentary film labeling him “The Kingmaker,” and he was photographed on the French Riviera with another. Both later voted to throw out a $50 million jury verdict against Massey.

“Politicians, Democrats and Republicans, flocked to Blankenship,” said Patrick McGinley, a law professor at West Virginia University who contributed to the state inquiry. “He was viewed by many as untouchable, just like all the other corporate executives of coal companies that killed scores or hundreds or thousands of miners over the last century.”

Prosecutors say that Mr. Blankenship was involved in the minutest details of life at Upper Big Branch, informed nearly every day of safety violations there, and that he had overruled managers who wanted to fix safety problems, demanding instead that they step up production and “run coal.”

David Hughart — a former high-level Massey executive who is serving a 42-month prison term connected to the 2010 disaster — testified to that effect this week, telling jurors he had approved safety shortcuts under “pressure to run, produce coal.” Mr. Hughart is one of four employees who have been convicted in connection with an investigation that followed the explosion. 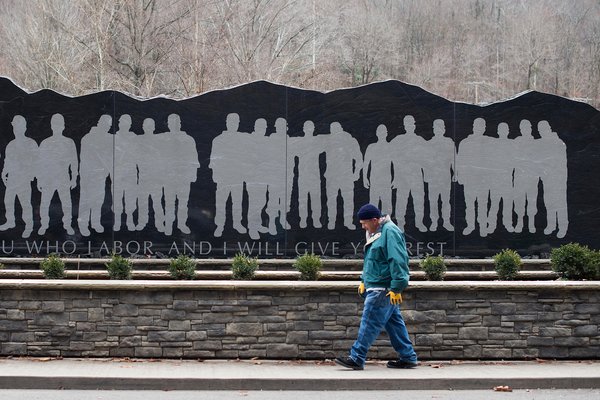 A memorial to the miners killed at Upper Big Branch was built in nearby Whitesville, W. Va.Credit Ty Wright for The New York Times

Defense lawyers have countered with, among other things, Mr. Blankenship’s handwritten notes; he shunned computers. In one note, he approved purchases of safety equipment; in another, he berated underlings for not moving fast enough on a plan to reduce violations.

“The only thing more frightening to our future than regulators is us,” Mr. Blankenship wrote.

The defense also contends that Mr. Blankenship was far removed from daily life at Upper Big Branch. But Michael B. Hissam, who worked on the early stages of the mine investigation as a federal prosecutor and now represents coal-industry clients, said the audiotapes “are the answer to the busy C.E.O. defense,” because they “show Don Blankenship having hands-on micromanagement involvement.”

Mr. Blankenship’s recordings are “a gift he gave to the families” of the dead miners, said Judy Jones Petersen, a Charleston doctor whose brother Dean Jones, a mine foreman, was killed. “The jury gets an opportunity to hear this snively character whining about his stock options,” she said. “It’s rather pathetic.”

The trial has also painted a grim portrait of conditions at Upper Big Branch, where rough-hewn miners working miles underground often feared for their safety. Several testified that they had been tipped off, in code language by superiors, when federal inspectors were on the way and been told to hastily fix violations.

One former miner, Brent Racer, described hearing the president of the Massey subsidiary that operated Upper Big Branch hassling a mine boss who tried to improve ventilation, telling him, “‘We would get more air soon, and we needed to worry about running.’”

Another, Gary Young, worked the overnight shift as a “rock duster” spreading limestone dust, a protective coating to hold down coal dust and prevent explosions. He told the jury that his equipment was often broken, and his shifts often truncated. Frustrated, he kept a journal to communicate with his manager. His last entry, two weeks before the blast, read, “I’m set up to fail.”

Defense lawyers have not said whether Mr. Blankenship will testify, but at court, he cuts an awkward figure. Accompanied by a team of Washington lawyers, he arrives each morning carrying a slightly battered black briefcase and walks, tight-lipped, past television cameras and reporters asking questions. During a break the other day, he sat by himself on a bench outside the courtroom.

He is not without supporters. Shannon Westerman, 77, a retired business owner who worked with Massey on a coal safety awareness program, turned up in court the other day to shake Mr. Blankenship’s hand.

“I think this is a political and media effort to destroy him,” Mr. Westerman said.

Coal mining has long been the lifeblood of the economy here, and many of the families who lost loved ones in the blast have deep roots in the industry.

Gary Quarles, a retired miner whose son, Gary Wayne Quarles, 33, died in the blast, was a miner himself. He and his wife, Patty, who has a tattoo on her left ankle of her son wearing his black miner’s hard hat, have been attending the proceedings.

The trial began last week; it is expected to run into November. By the end, Mr. Quarles said, the public will “see what kind of man Don really is.”

Five years after losing their son, the couple would like to see Mr. Blankenship convicted. But seeing him in court — surrounded by lawyers, listening to himself referred to as “the defendant” — is a kind of satisfaction in itself.

“To me, his privileges are gone,” Mrs. Quarles said. “As of right now, he can’t go to the Riviera. He can’t go to Vegas like he wanted to. He now is at someplace he’s never been, and that’s being controlled by other people. He’s not used to that.”