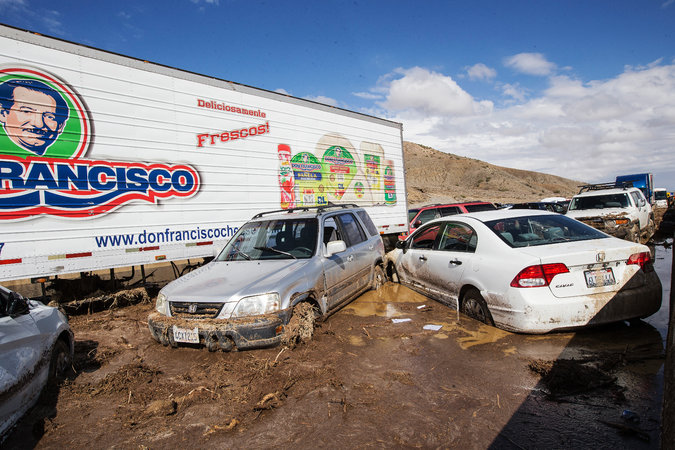 About 115 cars and 75 tractor-trailers were stuck on State Route 58. “It’s a miracle no one was seriously hurt,” Ray Pruitt, a spokesman for the Kern County sheriff, said.Credit Monica Almeida/The New York Times

LOS ANGELES — With strong El Niño conditions now established in the Pacific Ocean, Southern California has been getting a taste of what might be in store this winter: lots of desperately needed rain, but also dangerous mudslides and flash flooding.

After several hours of heavy rain, mud and debris cascaded down hillsides north of Los Angeles on Thursday, blocking two freeways, including Interstate 5, the critical artery linking this city with San Francisco, Sacramento and Seattle. Mud, sometimes up to windshields, swallowed hundreds of vehicles across the region. Traffic coming south toward Los Angeles all but stopped, stranding travelers far from home.

Near Tehachapi, north of here, the hills beside State Route 58 suddenly caved in. Jessica Rose, who was driving to her grandfather’s funeral in Los Angeles, pulled off the highway and onto an overpass just before it hit.

“I saw the mudslide — it looked like a brown waterfall coming down the mountain,” Ms. Rose, 22, said. “It was like Niagara Falls but brown, like the chocolate waterfall from Willy Wonka. Cars were all crashing into each other because there was 15 feet of water. Semi trucks were stuck in it. It was the most serious thing I’ve ever seen.” 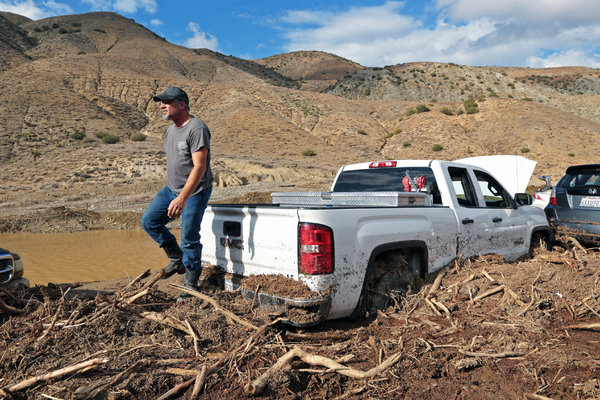 John Tate helped clear out cars at the site of a mudslide on State Route 58 between Mojave and Tehachapi, Calif., on Friday.Credit Monica Almeida/The New York Times

In all, about 115 cars and 75 tractor-trailers were stuck on the Route 58 freeway. No injuries were reported, but 300 people were evacuated, and many spent the night at American Red Cross shelters. Some remained in their vehicles overnight and did not get out until Friday morning, said Ray Pruitt, a spokesman for the Kern County Sheriff’s Department.

More than 100 vehicles were still lined up on the highway on Friday, Mr. Pruitt said, and bulldozers had gotten stuck trying to clear them out.

“There are four to five feet of mud covering the highway in both directions,” Mr. Pruitt said. “It basically looks like a wall of mud. I’m looking at semis buried in four feet of mud. It’s a miracle no one was seriously hurt.”

Rain was heaviest just southwest of Lancaster, where more than three inches fell in just an hour; golfball-size hail was also reported in the area. Funnel clouds were seen near Lake Hughes, not far from the mudslide on Interstate 5.

With more rain expected, flash flood warnings remained in place for much of the region on Friday.

Local and state officials have been trying to alert citizens to the dangers El Niño will bring — in addition to the welcome rain after four years of record drought — in hopes of limiting damage.

Los Angeles has set up a website devoted to El Niño preparation, which warns, “El Niño may bring much-needed drought relief to our state, but it could also mean El Monstruo-type storms creating disastrous flooding and mudslides.” The site encourages residents to obtain sand bags from the Fire Department, clear storm drains and prepare catch basins.

But many of those who got in trouble on Thursday and Friday ignored warnings, officials said.

Fire crews across Los Angeles and Kern Counties performed dangerous swift-water rescues, pulling people from trapped vehicles through windows as water rose too high for doors to open. Near Tehachapi, a woman who was seven months pregnant was helped to safety through her car’s sun roof.

Patrick Chandler, a spokesman for the California Highway Patrol, offered a message repeated by many frustrated officials on Friday: The public needs to heed warnings about dangerous conditions, especially with heavy rains and mudslides likely all winter.

There were plenty of signs warning people to stay away from Interstate 5, he said, but thousands kept coming anyway and ended up stranded when the road was closed.

“We really need people to look at a map and have everything they need before they head out, especially with El Niño coming,” he said. “We have got to get people out of that trance.”

Luisa Zavala was on her way south from Seattle when the storm closed Interstate 5. When she took a detour to Route 58, that was closed, too. So she and her husband, with their 8-year-old daughter, cut onto a back road.

They got stuck in mud so high they could not open the doors. About two hours later, the sheriff’s deputies arrived. It was 4 a.m.

They planned to head on to Los Angeles again Friday.

“There is still a flash flood warning for one potential route,” Ms. Zavala, 27, said, “so we’re not going to go that way.”