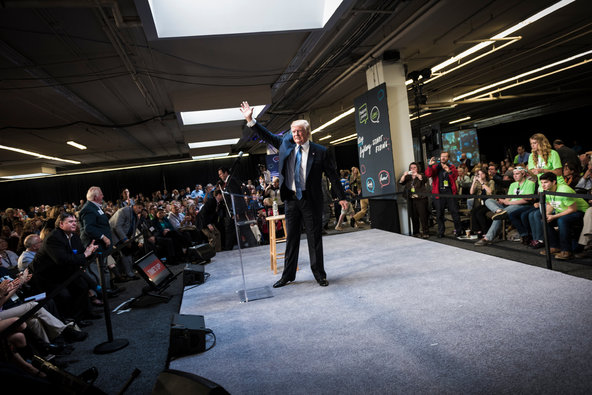 Donald J. Trump at the No Labels Problem Solver Convention in Manchester, N.H., on Monday.Credit Ian Thomas Jansen-Lonnquist for The New York Times

Conservatives have criticized Donald J. Trump for expressing liberal views on health care, abortion and taxing the rich. On Friday, Mr. Trump, who is leading most Republican presidential polls, offered his rivals another reason why he might not really be one of them when he noted that President George W. Bush had failed to stop the Sept. 11, 2001, attacks.

In an interview with Bloomberg, Mr. Trump was asked how he would demonstrate compassion during a crisis such as a hurricane or attacks on the World Trade Center. Saying that he has more heart and is more competent than the leaders who dealt with those tragedies, Mr. Trump then criticized the former president.

“When you talk about George Bush, I mean, say what you want, the World Trade Center came down during his time,” Mr. Trump said.

Blaming 9/11 on Mr. Bush is taboo for Republicans and has largely been off-limits for Democrats. Pressed on whether he really meant to blame the attacks on Mr. Bush, the billionaire developer did not back down.

“He was president, O.K.?,” Mr. Trump said. “The World Trade Center came down during his reign.”

Mr Trump has been fiercely critical in recent months of Jeb Bush, who is also seeking the Republican presidential nomination, and in the process has levied attacks on his brother, the former president. At a Republican debate last month, Mr. Trump blamed Mr. Bush’s presidency for helping to elect President Obama.

“Your brother’s administration gave us Barack Obama, because it was such a disaster, those last three months, that Abraham Lincoln couldn’t have been elected,” Mr. Trump said.

Jeb Bush, a former Florida governor, defended his brother’s performance, saying he kept the country safe. Mr. Trump rebutted that he did not feel so safe.

While many Republicans have kept their distance from George W. Bush since he left office, the former president’s popularity has improved over the years. The harsh criticism of his legacy from Mr. Trump could cause blowback from Republicans who think of the former president fondly or consider it unfair to argue that he could have stopped the attacks.

Representative Peter King, Republican of New York, came to Mr. Bush’s defense on Friday and said that no one saw the attacks of Sept. 11 coming and that blaming the former president was a cheap shot.

“I think Donald Trump is totally wrong there,” Mr. King said on Fox Radio. “That sounds like a Michael Moore talking point.”

Jeb Bush on Friday called Mr. Trump “pathetic” for daring to attack his brother in such a way.