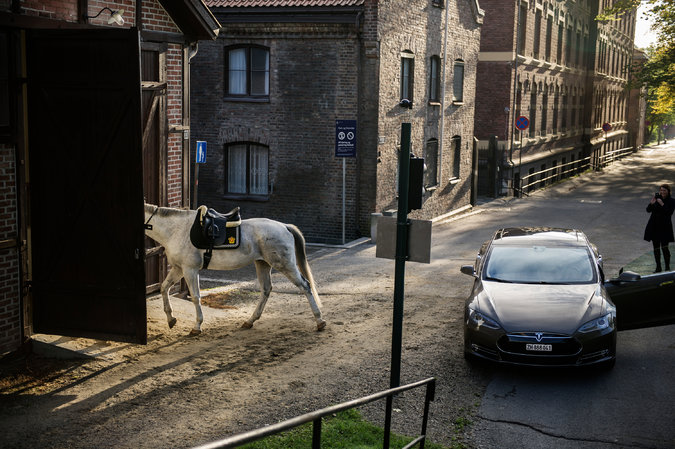 Norway has become a global model for how to persuade the public to embrace electric vehicles. Above, a Tesla S parked near a police horse stable.Credit Thomas Haugersveen for The New York Times

OSLO — Berit Nordgarden and her husband, Eivind Tellefsen, loved their nonpolluting Nissan Leaf electric car. But they found its 85-mile battery life too short for weekend trips to their cottage with their two young children.

So the outdoorsy couple took a deep breath and bought a second car: a Tesla Model S luxury sedan with three times the battery range, the best of any electric car on the market. Buying an $87,000 car was a stretch, requiring them to refinance their primary residence, a cozy wooden home in Oslo.But the Tesla would have been completely out of reach — costing perhaps double the price — without generous subsidies and incentives that the Norwegian government offers to encourage the adoption of e-cars.“If there were no incentives, we couldn’t have afforded it,” said Mr. Tellefsen, a computer engineer, as he squinted into the dazzling sun of an autumn afternoon. “We’d probably have bought a secondhand Skoda.’’Mr. Tellefsen and Ms. Nordgarden, along with thousands of other Norwegians, are taking part in the world’s most ambitious governmental effort to wean drivers off fossil fuels. It is part of the effort by this country of 5.2 million people to reduce greenhouse gas emissions and meet its ambitious United Nations climate goals.Photo 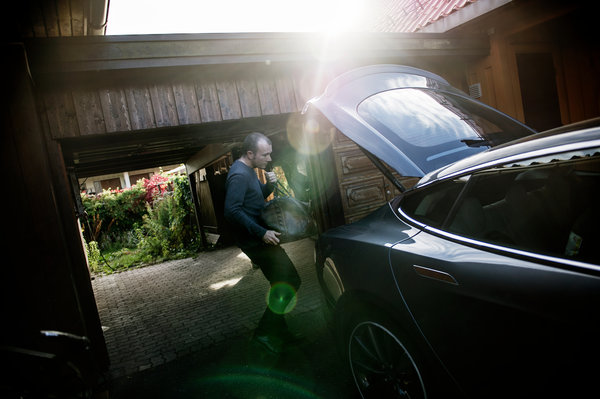 Eivind Tellefsen and his wife, Berit Nordgarden, bought a Tesla Model S, made affordable by generous government subsidies. They also own an electric-powered Nissan Leaf.Credit Thomas Haugersveen for The New York Times

At a time when the Volkswagen emissions scandal has helped expose the drawbacks of Europe’s heavy reliance on diesel cars, Norway has become a global model of how to get the public to embrace electric vehicles, an experiment that is attracting researchers and policy makers from around the world.

No other country can yet match Norway’s proportion of all-electric cars. Though still only 2 percent, the figure is double that of the runner-up, the Netherlands, and is growing faster than anywhere else in the world. More than one-fifth of new car sales in Norway are of electric vehicles.

Some skeptics wonder whether the Norwegian program is cost-effective, or even an efficient way to reduce air pollutants. And some elements of the program simply may not be replicable in other countries. But for many, Norway is showing a path forward.

“If there’s anyone in the world who should be using electric vehicles, it’s Norway,” said Julian Marshall, an associate professor of environmental engineering at the University of Minnesota. “That’s a place with clean energy.”

Ms. Nordgarden said she and her husband had made do for years with their bicycles, public transportation and a car-share service. It was the government program that induced them to choose a Leaf over a fuel-burning car two years ago.

The popularity of electric vehicles has surged in Norway, encouraged by generous subsidies including tax exemptions on their purchase and free use of toll roads for e-car drivers

Tax breaks on purchase and use of electric cars

Tax breaks on purchase and use of electric cars

“We didn’t really care about cars,” she said. “Now it’s fun.” And going back to a conventional automobile was out of the question, Ms. Nordgarden said: “Driving a petrol car is like time travel back to the 1980s.”

Making Norway’s project to shift away from fossil-fuel cars all the more notable is the fact that the country is one of the world’s biggest producers of oil and natural gas. But it is also blessed with an abundance of fast rivers, allowing it to generate virtually all of its electricity from hydropower. That makes Norway’s electricity cleaner and relatively cheap — a further impetus for adopting e-cars. (A country where much of the electricity is generated by coal-fired power plants would not see as many environmental benefits from switching to electric vehicles.)

Proponents argue that electric cars are essential for a transition to a low-carbon economy, as they are vastly more efficient than conventional autos, transferring about 60 percent of their energy to the wheels. That compares with only about 20 percent for gasoline motors, which waste most of their energy in the form of heat.

To meet climate goals, “a large share of the new cars have to be electric,” Lars Andreas Lunde, the deputy minister of climate and environment and a Conservative Party politician, said in an interview. Because e-cars are more expensive to make than ordinary cars, “there have to be incentives,’’ Mr. Lunde said. “It has to be more expensive to pollute than to use environmentally friendly fuels.”

After more than a decade of government support, official projections had held that there would be 50,000 e-cars on Norway’s roads by the end of 2017. That number, in fact, was reached this past April, and by September had grown to 66,000 all-electric cars, and an additional 8,000 gasoline-electric hybrids like the Toyota Prius. 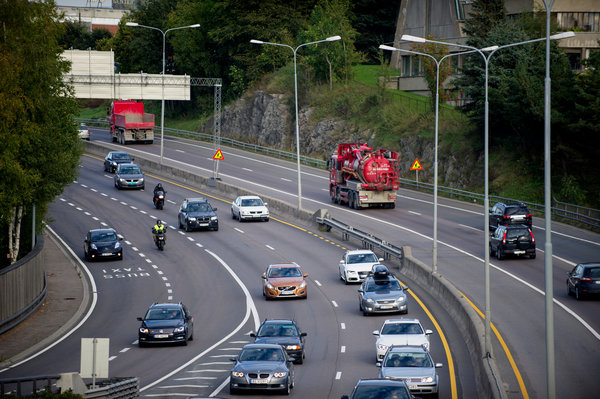 More than one-fifth of new car sales in Norway are of electric vehicles.Credit Thomas Haugersveen for The New York Times

Rather than appealing to people’s environmental conscience, Mr. Lunde said, Norway decided to exempt e-cars from vehicle taxes that are among the highest in the world, including a sales tax of 25 percent plus a registration tax that averages more than $12,000, depending on vehicle weight, engine size, nitrogen oxide pollution level and carbon dioxide emissions.

To see how the subsidies translate to the showroom, consider Norway’s best-selling electric car this year, the Volkswagen e-Golf.

At the Moller Bil Ryen Volkswagen dealership in Oslo, a standard diesel Golf retails for about 330,000 Norwegian kroner, or about $40,000. After tax breaks, a comparably equipped version of its electric cousin, the e-Golf, sells for 250,000 kroner, or just under $31,000.

That price advantage would be lost in neighboring Sweden, which does not offer the same level of subsidies. There, the standard Golf would sell for less than $30,000, while the e-Golf would be closer to $40,000.

The cost of operating a car in Norway can also include pricey parking fees, high tolls for bridges and tunnels, and expensive ferry tickets. So e-cars were exempted from those, too. And it doesn’t hurt that fully charging a car battery from the grid costs the equivalent of only a few dollars, while gasoline retails in central Oslo for more than $6 a gallon. 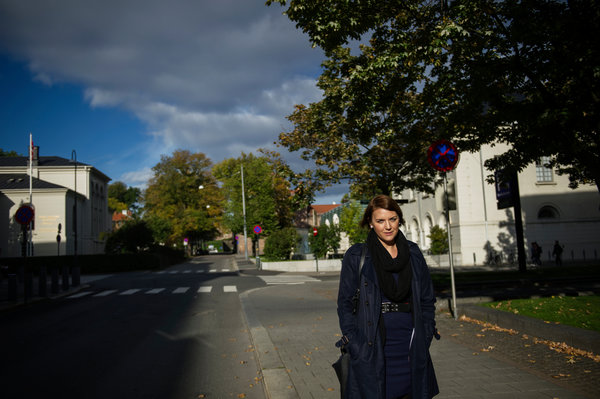 Christina Bu, the head of the Norwegian Electric Vehicle Association, says the country's system works because “it’s constructed to make the least-polluting cars the most attractive.”Credit Thomas Haugersveen for The New York Times

Kasper Arnberg, 30, an Oslo psychologist who bought a Nissan Leaf two years ago, said he and his wife, Camilla Herbern — also a psychologist — had been “idealistic,” in that environmental concerns influenced their decision to go electric.

“But my wife made an Excel spreadsheet,’’ Mr. Arnberg said. And after factoring in tax breaks, fuel costs, tolls, parking and all, “the Leaf came to about half the price” of a gasoline-powered car, he said.

Christina Bu is head of the Norwegian Electric Vehicle Association, which advocates for both consumers and manufacturers. “People aren’t so green that they want to pay a lot extra to buy an electric,” she said. The Norwegian system works, Ms. Bu said, because “it’s constructed to make the least-polluting cars the most attractive.”

Mr. Arnberg, like many Norwegians interviewed for this article, bemoaned the fact that the country’s vehicle-charging infrastructure had not kept pace with the number of new electric cars on the road. It is an issue that plagues other places that have embraced e-cars, including California, where the competition for public plug-in sites sometimes grows hostile.

Oslo now has only about 700 public charging spots, although city officials aim to raise that to above 1,000 before the end of the year. For most people, that means most of their charging is done at home. 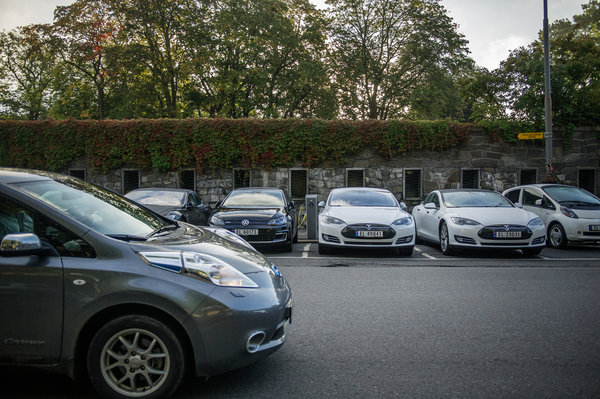 Oslo now has about 700 public charging spots,  although city officials aim to raise that to above 1,000 by the end of the year.Credit Thomas Haugersveen for The New York Times

City and regional governments in Norway, meantime, have started to complain of a revenue shortfall from all the free-riding e-cars that are not paying fees and tolls.

Mr. Lunde, the deputy climate minister, said changes to the program were inevitable, including more power for local authorities to set rules governing e-cars and phasing out the sales tax exemption. “The incentives were always meant to be temporary,” he said, “just until we achieved a certain market share.”

Some critics say Norway is not getting its money’s worth from the program.

Anders Skonhoft, an environmental economist at the Norwegian University of Science and Technology, estimates that the total value of subsidies works out to about $13,500 a year per electric car over each vehicle’s life. But for all the money Norway has put into the program, he said in an interview, the country has cut its carbon dioxide emissions by no more than one-tenth of one percent.

If the main goal is clearing up unhealthy pollutants at the local level, Mr. Skonhoft said, it would make more sense to discourage the use of diesel engines. But he noted that Norway, like many other European governments, effectively subsidizes diesel fuel by taxing it at a lower level than regular gasoline. As for greenhouse gases, he said, it would be more effective, and cost far less, simply to impose a carbon tax, discouraging use of traditional cars by requiring drivers to pay more to pollute more.

Mr. Lunde acknowledged that “there’s a discussion of whether it’s too expensive.” But, he said, “it’s difficult to criticize in economic terms, because the value of clean air in the city center is difficult to quantify.”

Ms. Bu, of the electric vehicle association, said her group hoped that the incentives would last long enough to change the way people think about transportation. “If we can continue like this until 2020, we will change the car industry,” she said.

And proponents say one near-term spark to e-car sales could be the Volkswagen scandal, in which the German company outfitted 11 million cars — including nearly 150,000 in Norway — with software meant to deceive emissions testers.

Mr. Lunde said some environmentally minded consumers might come to believe that all the automakers were cheating.

“If you buy an electric, at least you’re safe,” he said. “There are no emissions.”