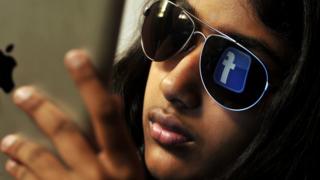 A bear hug, a photo filter and a new debate on net neutrality - Ayeshea Perera examines the domestic fallout of Indian Prime Minister Narendra Modi's Facebook townhall in US.

It was supposed to be a moment that rocked the virtual world. Mr Modi, widely acknowledged as one of the world's most influential politicians on social media, enveloped a slightly stunned Mark Zuckerberg in a bear hug.

But what was it that really happened in Menlo Park? Why did some people think Mr Modi wasn't acting in India's best digital interests when he hugged Mr Zuckerberg?

India with an internet population of 354 million - which has already grown by 17% in the first six months of 2015 - is an obvious target for not only Facebook, but other Silicon Valley giants. And they have all been more than happy to pledge their support for digital India - a recently launched government initiative aimed at reinvigorating an $18bn (£11.6bn) campaign to strengthen India's digital infrastructure.

But this huge show of support and the increased interest in India has caused some concern within the country.

"Is Digital India going to only make India a consumer of services offered by global tech companies in lieu of data? Personal data is the currency of the digital world. Are we going to give that away simply to become a giant market for a Facebook or a Google? Look at the way the tech world is skewed. Only China has been able to come up with companies that can take on these MNCs" Prabir Purkayasta, chairman of the Society for Knowledge Commons in India, told the BBC.

"The British ruled the world because they controlled the seas," he said. "Is India going to be content to just be a digital consumer? To being colonised once again?"

And in the aftermath of the Facebook townhall in particular, some talk has begun to surface about what Mr Zuckerberg's real India ambitions are.

Soon after the townhall ended, both Mr Modi and Mr Zuckerberg declared their support for digital India by using a special Facebook filter to tint their profile pictures in the tri-colour of the Indian flag.

Multitudes of Indians followed suit and timelines were awash with snazzy tinted profile pictures, all in support of "Digital India".

But then a tech website released what it claimed to be a portion of Facebook's source code, which allegedly "proved" that the "Support Digital India" filter was actually a "Support Internet.Org" filter.

Facebook quickly issued a denial, blaming the text in the code on an "engineer mistake" in choosing a shorthand name he used for part of the code.

But the "mistake" which has been coupled with a huge advertising blitz for Internet.Org across television channels and newspapers has raised suspicion about Facebook's motives. A Facebook poll on Internet.Org that frequently appears on Indian user timelines has also been ridiculed for not giving users an option to say no.

Instead the answer options to the poll question "Do you want India to have free basic services?" are "Yes" and "Not now".

Internet.org (now called free basics), aims to extend internet services to the developing world by offering a selection of apps and websites free to consumers.

Facebook's vice-president of infrastructure engineering, Jay Parikh has described the initiative as an "attempt to connect the two-thirds of the world who do not have access to the Internet" by trying to solve issues pertaining to affordability, infrastructure and access.

When Facebook launched the initiative in India in February, it was criticised by Indian activists who expressed concerns that the project threatened freedom of expression, privacy and the principle of net neutrality.

On the other end of the debate, Indian columnist Manu Joseph wrote in the Hindustan Times newspaper, hitting out at the "selfish" stand on net neutrality. He said concerns over the issue should be "subordinate to the fact that the poor have a right to some Internet".

A massive campaign by India's Save the Internet Coalition exhorting Indians to speak out against initiatives threatening net neutrality caught public imagination and saw more than a million emails to India's regulator, the Telecom Regulatory Authority of India (TRAI), demanding a free and fair internet in the country. Internet.Org was one of the initiatives immediately affected.

TRAI since released a draft policy on net neutrality, but a question that has been asked is whether it was appropriate for Mr Modi to visit Facebook given that the policy was still under consideration.

Image copyrightAFPImage caption Was the meeting a bad move by the Indian prime minister?

Mr Purkayasta is of the opinion that it could have been avoided. "It was not the time or the place to go. Even if it was simply a publicity gimmick, it still sends a signal to officials involved in drafting the policy," he said.

However, Sunil Abraham from the Centre for Internet and Society told the BBC he believed that while Facebook's intentions were suspect, Mr Modi's visit had the potential to safeguard net neutrality in India.

"India is a hugely important market for Facebook, and the prime minister has the power to force positive changes to its policies," he said. "We gain nothing by shutting them out."