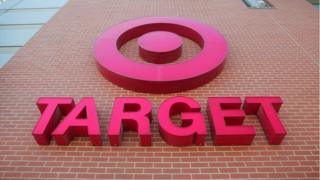 Gina Young was shopping at US superstore Target on Thursday morning - when she and the other shoppers suddenly heard a surprising announcement over the loudspeaker.

Explicit audio from a pornographic film was blasted out for all to hear. And it kept playing. And playing. For 15 minutes.

Young, who was shopping with her three-year-old twin boys, uploaded the clip to Facebook. (Obvious warning: it has rude audio.)

"People were up in arms," she wrote. "Some people threw their things down and walked out. Others were yelling at employees."

As pranks go, it's fairly low-grade. But Target has a problem. Staff at the store in Campbell, a small city just south of San Jose, were all but powerless to stop it due to how the PA system is designed.

And it's not an isolated incident. According to local media, it's at least the fourth time this prank has happened since April. In one instance, a store had to be evacuated.

So what's going on? Are mischievous staff causing trouble? Have Target's systems been hacked?

'Control of the intercom'

Well not quite - but the cause is interesting, and yet another example of how systems are left with vulnerabilities by creators who never imagined people might have malicious intent.

An email obtained by the BBC, sent by company bosses to Target store managers across the US on Friday afternoon, outlines a weakness in the store's PA system being used to carry out the prank.

"Non-Target team members are attempting to access the intercom system by calling stores and requesting to be connected to line [xxxx]," it reads.

"If connected, callers have control of the intercom until they hang up.

"We are actively working to limit intercom access to the Guest Services phone only. In the meantime, inform all operators to not connect any calls to line [xxxx]."

So in other words, if you ring up Target and ask to be put through to a certain extension, you're suddenly live on the PA system for as long as you like.

Hardly the hack of the century, granted, but a reminder that there are people out there that will find even the most obscure vulnerabilities and exploit them.

Target's spokeswoman Molly Snyder would not confirm the authenticity of the email, but told the BBC: "We are actively reviewing the situation with the team to better understand what happened and are taking steps to help ensure this doesn't happen again.

"Because this is an active investigation, I'm unable to share additional details, but we want our guests to know that we take this very seriously."

Target should be acutely aware of weak systems. The retailer was at the centre of a huge hack attack storm last year.

Some 40m shoppers had their banking details stolen, and the company ended up paying out $10m (£6.5m) in compensation.