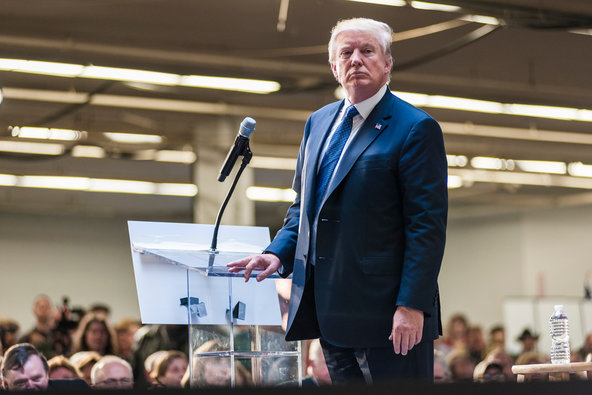 An aide to Donald J. Trump has raised the possibility of the candidate not attending the next Republican presidential debate unless the criteria set by CNBC are changed, according to two people briefed on a conference call where the matter was discussed on Thursday.

Several campaigns are unhappy with the criteria that have been set by CNBC, including the lack of opening and closing statements, and, as of now, the lack of a set length of time for the Oct. 28 debate at the Coors Events Center in Boulder, Colo., according to those briefed.

The concerns were aired in an initial conference call held on Wednesday that was reported by Politico. Aides to Ben Carson and Senator Rand Paul expressed unhappiness on that call, as did representatives of other campaigns.

So in a follow-up call held on Thursday, aides to Senator Ted Cruz and Mike Huckabee joined in seeking to clarify the rules. And Corey Lewandowski, the campaign manager for Mr. Trump, raised the possibility that the candidate might not attend if the criteria weren’t changed, the people briefed on the call said.

Mr. Lewandowski, in an interview, said: “The criteria that was outlined by CNBC was never discussed with any of the candidates or the campaigns. So what CNBC did was send out a memo and said, ‘Here’s the criteria as you have approved them and that went out to all the campaigns.’ We said we never agreed to this criteria.”

He said he had not taken part in the call on Wednesday. But he said that CNBC was supposed to address solutions.

“For us it was imperative that the time be changed to 120 minutes” for the length of the debate, he said. Mr. Trump was unhappy that the CNN debate that Republicans recently took part in lasted nearly three hours.

“Until we have this criteria specifically laid out,” he added, “it is difficult to participate.”

He urged the Republican National Committee to no longer count the CNBC event as a sanctioned debate if clarity didn’t come by the end of Thursday. A spokesman for the R.N.C. did not immediately respond to an email.

Brian Steel, a spokesman for CNBC, said in a statement: “Our goal is to host the most substantive debate possible. Our practice in the past has been to forgo opening statements to allow more time to address the critical issues that matter most to the American people.”

He added, “We started a dialogue yesterday with all of the campaigns involved, and we will certainly take the candidates’ views on the format into consideration as we finalize the debate structure.”

Mr. Lewandowski was not on the call that took place on Wednesday. On the call on Thursday, according to one participant, Mr. Lewandowski said that Mr. Carson’s campaign would stand in solidarity with Mr. Trump on not participating in a debate that wasn’t two hours long with commercial breaks.