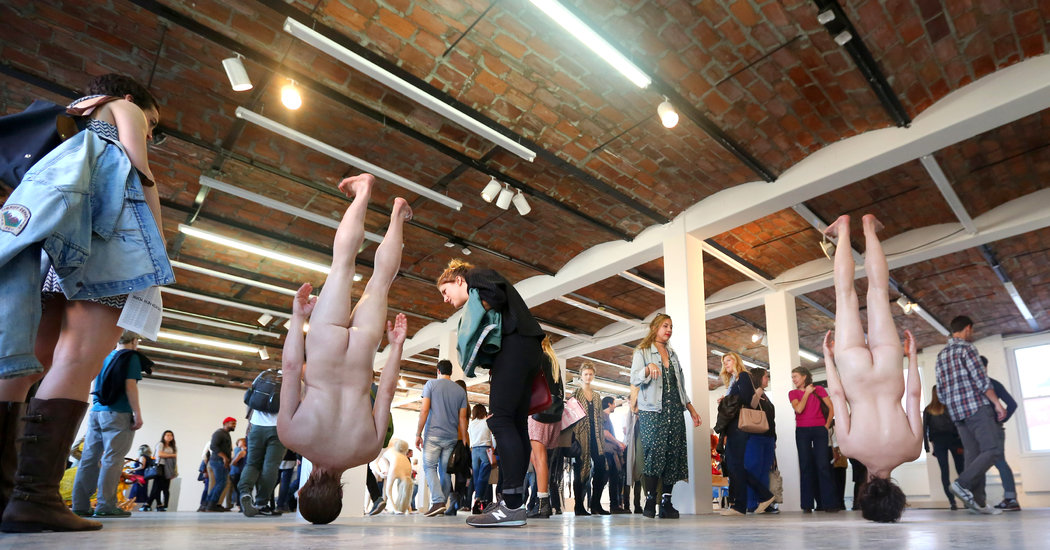 “Greater New York,” the title of MoMA P.S. 1’s every-five-years roundup of local art, has come to sound like a wish, not a statement of fact. Since the show’s first appearance in 2000, the city’s gallery population has exploded. But abundance has settled into blandness. A tour of Chelsea these days can be a deadening experience. Art neighborhoods that might once have offered alternatives, don’t.

How did this happen? You can point to the fact that art neighborhoods have fewer and fewer artists; they’ve been priced out. You can point to the hype around painting, specifically abstraction, that has encouraged the equivalent of a fancy airport art for newly rich collectors. You can point to a constitutional laziness that is always pulling the art establishment toward what’s easy to chat and write about.

“Greater New York,” now in its fourth edition, has its share of abstract painting, but cannily weaves it into a larger story, one that goes beyond a fixation on form to focus on ideas that tie art and artists to life. With a multigenerational team of organizers — Peter Eleey and Mia Locks of P.S. 1; Thomas J. Lax, associate curator of media and performance art at MoMA; and Douglas Crimp, a professor of art history at the University of Rochester — the show steps away from its founding premise of newness, the idea that it would be a quinquennial update on the metropolitan market. The 158 artists on the roster range from 20-something to 80-something; a few are dead. The notion that an “emerging” artist has to be young is discarded. Older artists newly in the spotlight, or back after a long delay, qualify. And history works in two directions. Art from the 1970s and ’80s is presented as prescient of what’s being made now, and new art is viewed as putting a trenchant spin on the past. 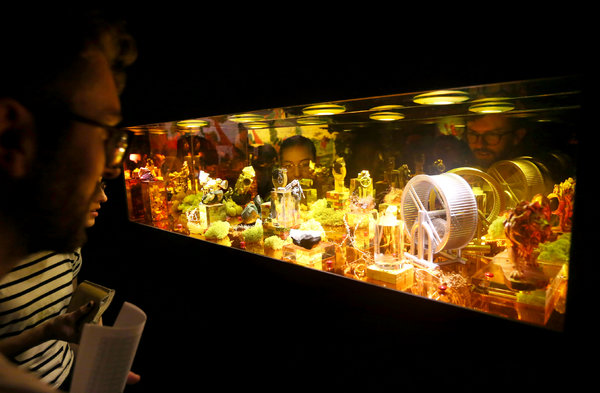 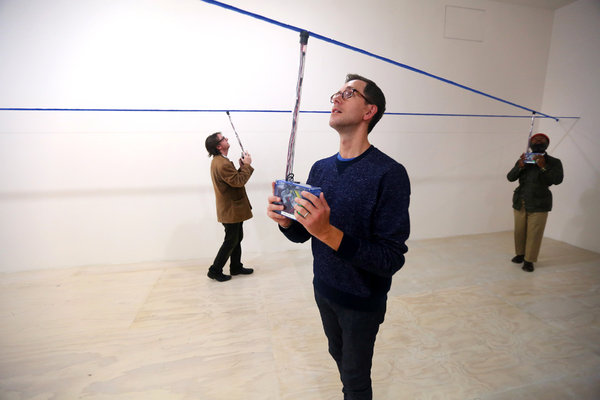 As its title indicates, “Greater New York” is also about a city and specifically a city where artists have always made their way under stress. Just inside P.S. 1’s front door is a group of photographs documenting physical changes at the institution since it opened in 1971 in a former public school in a Queens neighborhood offering cheap rent for artists. The pictures are on permanent view but a young artist named Park McArthur, born in 1984, has added one more. It’s a 2015 shot of P.S. 1 — now MoMA P.S. 1 — flanked by a glass high-rise and condominium complex in progress, and half-obscured by a street banner reading: “Make It Here. Long Island City. Make It Yours.” 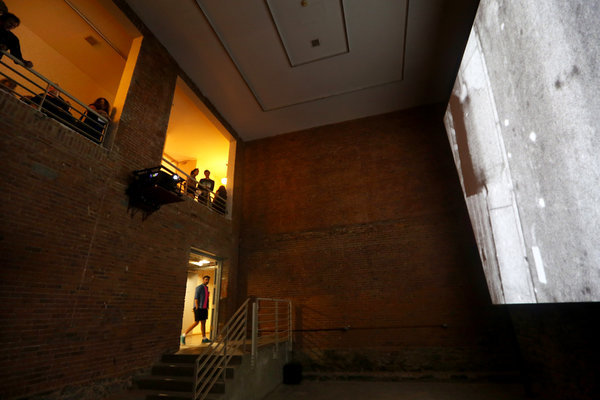 Ms. McArthur’s jab at gentrification has a history. One of the first things you see once inside the galleries is a 1976 video by James Nares called “Pendulum.” In it, what looks like a wrecking ball swings back and forth between buildings in Lower Manhattan, an area that art had already made chic, and from which the artist population would begin to vanish. So much for the notion that the 1970s were a kinder, gentler time for art. The show’s trip into the past doesn’t feel much like a sentimental journey. A reality check is more like it.

The main gallery on the first floor is devoted to a figure still little known to the art world at large, Alvin Baltrop (1948-2004), a photographer who, from the mid-1970s to mid-1980s, took thousands of pictures of West Side piers that were gay cruising spots. Derelict in a way that some people find romantic, the piers became a danger zone after the appearance of AIDS, the presence of which is very much part of the fluidly paced but nonlinear show. 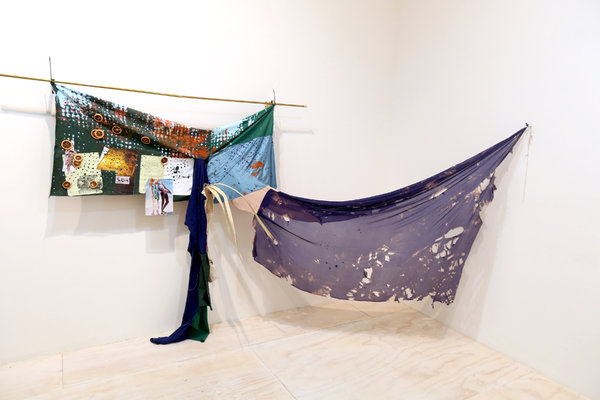 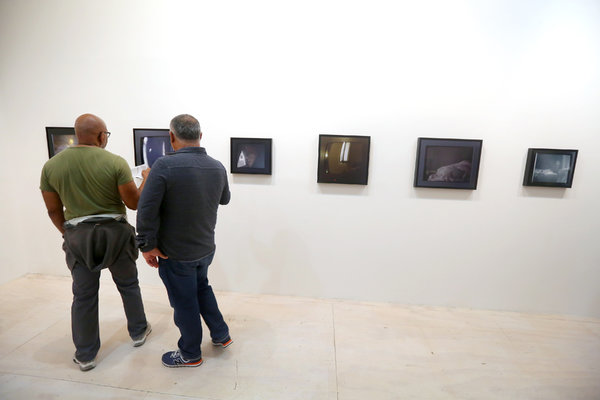 A few galleries on, after the visual equivalent of urban buzz in assemblages by Eric Mack and zany videos featuring drag queens and house pets by Nelson Sullivan (1948-1989), comes work by artists who were early AIDS activists: Joy Episalla, Donald Moffett, and the collective Fierce Pussy (Nancy Brooks Brody, Zoe Leonard, Carrie Yamaoka and Ms. Episalla). Made largely in a language of darkness and light, it catches the somber mood of the time.

In one of Mr. Baltrop’s photographs you get a glimpse of a piece of art composed of those elements: a 1975 installation called “Day’s End” by the artist Gordon Matta-Clark (1943-1978), who cut a giant half-moon-shaped slice out of a pier wall and brought daylight streaming in. A year later, Matta-Clark participated in P.S. 1’s first major group exhibition, “Rooms,” for which he sliced pieces out of the building’s walls and floors. 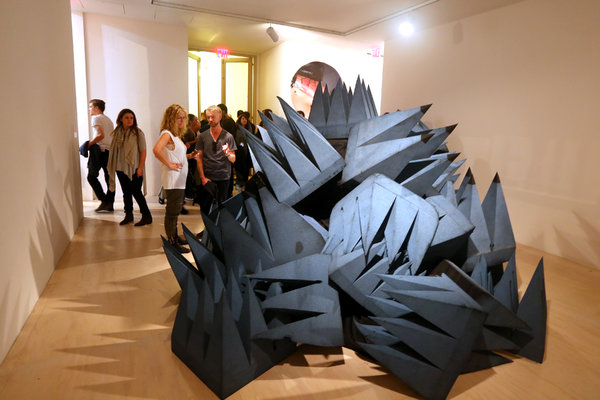 Images of interrupted and unstable architecture recur in “Greater New York”: in Lutz Bacher’s jumble of castlelike blocks, and in a funky, sound-generating lean-to by Sergei Tcherepnin. A roomful of 1979 photographs document Henry Flynt’s assiduous tracking of graffiti tags left by the artists known as SAMO (Shannon Dawson, Al Diaz and Jean-Michel Basquiat) on downtown New York walls. In a 2007 text piece, the Bronx-born Glenn Ligon, who is African-American, details the many changes of home he made in New York under the shadow of racism. And in an extraordinary 2013 video, “Ditch Plains,” by Loretta Fahrenholz, shot in the aftermath of Hurricane Sandy, the city is the stage for a choreographed apocalypse that leaves black bodies lying in the street. 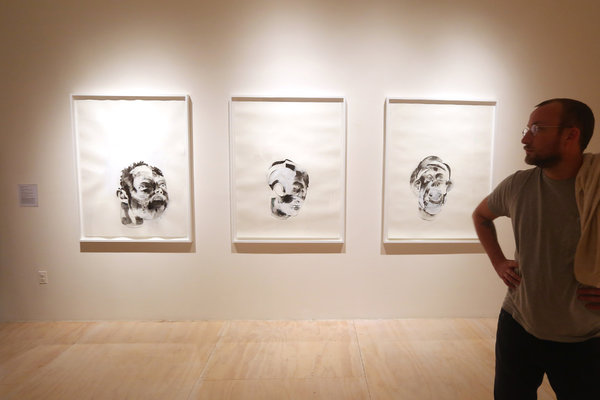 “Greater New York” isn’t shy about dealing with identity politics. How could it be in Eric Garner’s hometown? But no identities are simple: The human body is raw matter mashed in the crucible of race, gender and class. This is as true of Wardell Milan’s cut-and-paste ink portraits on the first floor and the shape-shifting figures in the heart-throb-and-bloodstain-pink photographs by Jimmy DeSana (1950-1990) on the second, as it is of two dozen sculptures in a wide-open space also on the second.

Here one of John Ahearn’s tender 1980s life-casts of South Bronx residents keeps company with a 2013 Stewart Uoo mannequin-in-meltdown. In images of a cosmic otherness, Huma Bhabha takes a mock-primitive tack, and Rina Banerjee goes for exotic gorgeousness, a choice also made by Raul de Nieves in an all-beads avatar figure, and Ignacio González-Lang, who turns a Ku Klux Klan robe into Latino fiesta-wear. 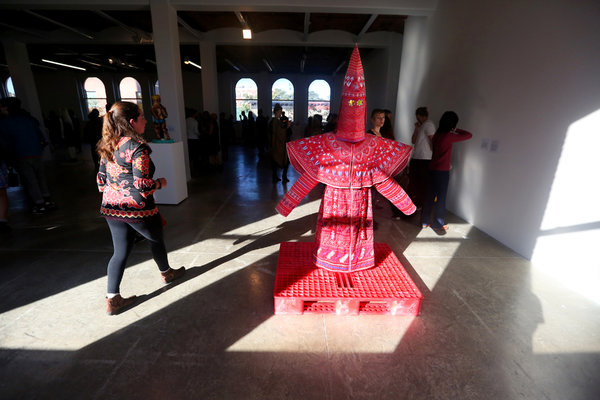 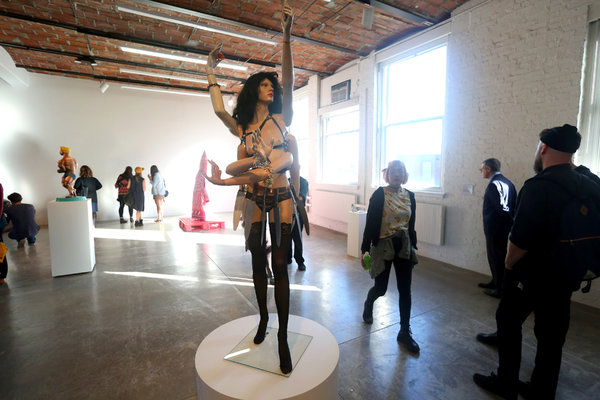 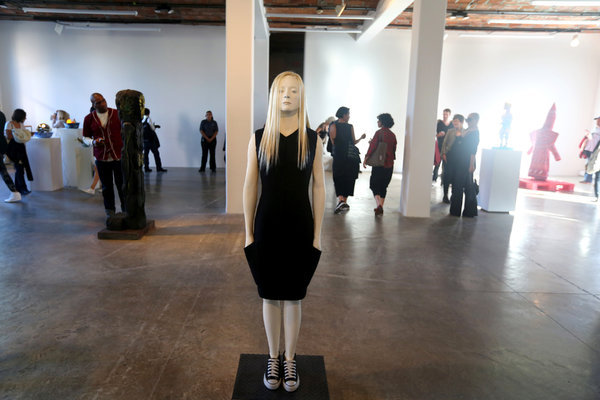 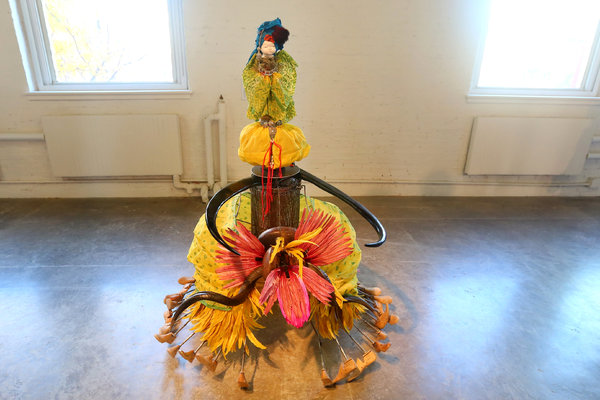 It’s good to see a 1994 sculpture by Mary Beth Edelson, and a wild one it is, conflating Lorena Bobbitt and the Hindu goddess Kali. There are, in addition, painted photographs from the 1970s by this feminist pioneer, though an attempt to connect them to recent art by younger artists feels strained. The 1994 piece makes a stronger impression. So does a recent sculptural self-portrait by Ms. Edelson’s contemporary, Judith Shea, who was also in the 1976 P.S. 1 show with Matta-Clark.

He’s a central figure here, present on every floor. He was adamantly antimarket and anti-institution. He encouraged artists to take their financial lives into their own hands. He did so himself by, among other things, organizing an artist-run restaurant in SoHo. Certain artists in “Greater New York” — Susan Cianciolo, the design duo Mike Eckhaus and Zoe Latta, and the collective named Slow and Steady Wins the Race — follow his entrepreneurial lead by combining art and fashion, or, in the case of Alisa Grifo and Marco Romeny, by running the combination mom-and-pop store and museum Kiosk. 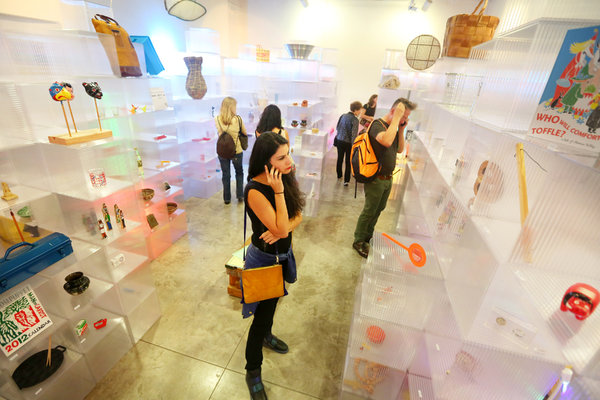 In this Kiosk installation, visitors use cell phones to call for information about the objects on display.Credit Chang W. Lee/The New York Times Photo 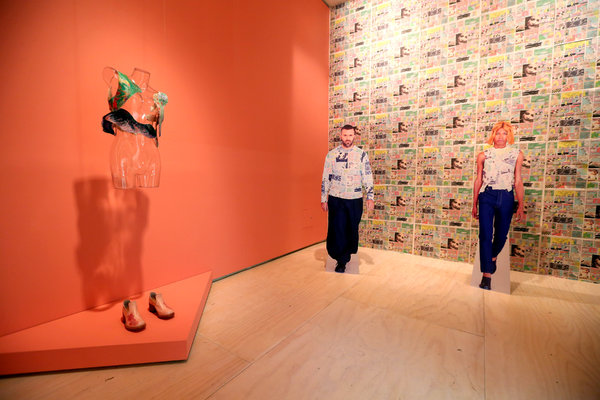 I have doubts about the current models. Matta-Clark was talking about collectivity in the wide political sense of communal sharing. The 2015 versions are closer to old-school private enterprise. Those doubts are not nearly as dire the misgivings I feel toward a corporatized art market that now delivers all profits into the same few pockets. 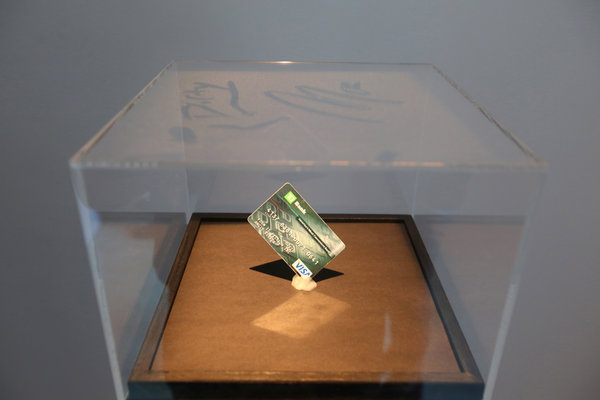 Several young artists in “Greater New York,” like Angie Keefer, Cameron Rowland, Ben Thorp Brown and Ms. McArthur, directly address this programmed inequity, which is as much business-as-usual in the art industry as it is in the larger world. And in one of the show’s culminating pieces, the drag artist Lady Bunny calls it out loud and clear to a disco beat in Charles Atlas’s video “Here She Is.” 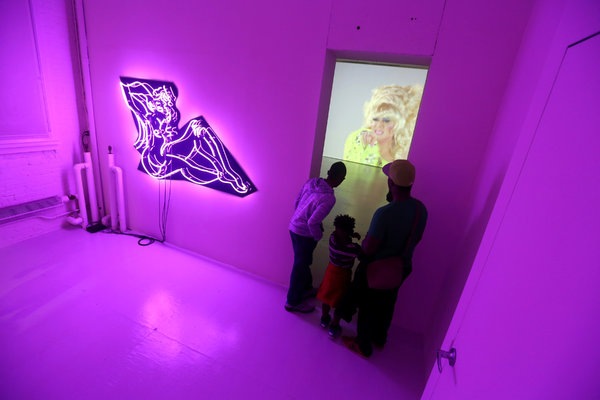 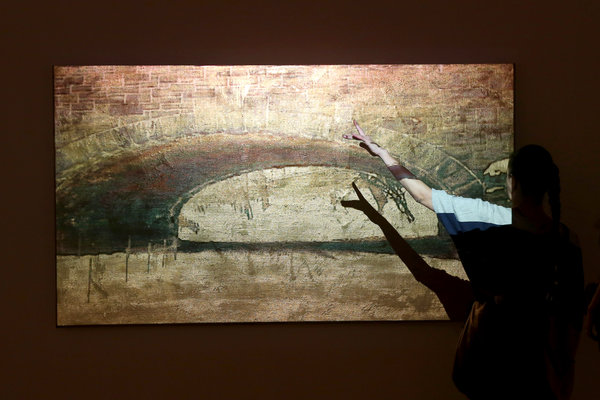 Now it’s time for an exhibition to do some serious calling out too.

A model from the past? How about Hans Haacke’s early research projects that imaginatively linked New York slum real estate and corporate art sponsorship. Mr. Haacke brought art world and real world into such sharp focus that the Guggenheim canceled his 1971 solo show, on the grounds of artistic impropriety, six weeks before the opening. But such telling-truth-to-power projects should come from inside our institutions, because they have the resources, and because they need to restore credibility. The germ of such a project is there in “Greater New York. ” Maybe the smart team that put it together can be reconvened for a leaner, meaner, franker version in the future. That would be great.

An earlier version of this review incorrectly stated the title of Thomas J. Lax, one of the show’s organizers. He is a curator, not a professor.

An earlier version of this review misstated the location of two dozen sculptures in a wide-open space. They are on the second floor, not the third.