President Mahmoud Abbas of the Palestinian Authority said Ahmad Manasra, 13, was killed by an Israeli on Monday. Then Israel released video of the living boy being treated in a hospital on Thursday.

By REUTERS on Publish Date October 15, 2015. Photo by Reuters. Watch in Times Video »

JERUSALEM — The Palestinian president said on television that the 13-year-old Arab boy bleeding profusely from the head had been executed on a Jerusalem street. An Israeli hospital showed a photo of the boy recovering, spoon-fed by a nurse.

Conflicting versions of reality have always been part of the seemingly intractable Israeli-Palestinian conflict — especially in the combustible atmosphere of recent days, as a wave of stabbings of Israelis by Palestinians has traumatized Israel.In many cases, the suspects in the attacks have been shot to death. In this instance, however, the boy, Ahmad Manasra, was not killed, as had been claimed by President Mahmoud Abbas of the Palestinian Authority while commenting on a viral video that generated deep anger in the Arab world.Israeli officials jumped on the apparent misstatement, describing it as a lie that reflected what they called the broader dishonesty and cynicism of the Palestinian leadership.Israel has long charged the Palestinian Authority and its official news media with engaging in incitement to violence. Palestinian officials point to Israel’s occupation of the West Bank and settlement construction as the triggers of violence, and accused Israel of seizing on the Manasra episode to deflect attention from Israel’s policies, which they called the root cause of the problem.Photo 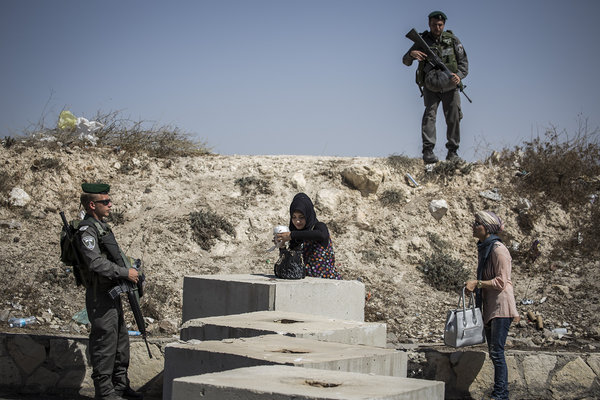 But in the social-media-fueled dynamic of this latest surge in violence, mutual mistrust and recrimination seem to have reached new heights.

Palestinians have accused Israel of planting knives where stabbing suspects have been killed. Official Palestinian news reports describe them as martyrs, either without mentioning their role in stabbing attacks or reporting the attacks as Israeli allegations. And if there is no video of a stabbing, many Palestinians insist that it did not happen.

On Thursday, Prime Minister Benjamin Netanyahu sought to use what is known about Ahmad Manasra to expose what he described as the false and incendiary Palestinian narrative.

“Yesterday, President Mahmoud Abbas accused Israel of putting to death, executing an innocent Palestinian boy,” Mr. Netanyahu said at a rare news conference he convened for the international media in Israel. “First of all, he’s not dead — he’s alive. Second,” he said, “he’s not innocent — he tried to kill, murder, knife to death an innocent Israeli youngster, 13 years old, riding a bicycle. This Palestinian terrorist is now being treated in Hadassah Hospital in Israel.”

Mr. Netanyahu also rejected accusations that the Israeli police have reacted with excessive force, saying they had acted in legitimate self-defense, just as any police force would.

An aide to Mr. Netanyahu showed images of posters bearing the logo of Mr. Abbas’s Fatah faction honoring two of the stabbers, and what he said was a Fatah Twitter feed showing a crude drawing of a bearded Jew with a knife in his back. He also showed images of an official from the Islamic group Hamas, Fatah’s rival, brandishing a knife and encouraging more stabbings.

Prof. Yoram Weiss, director of the hospital, told reporters that Ahmad Manasra, who was admitted with a head injury, was now “conscious, eating and watching TV.”

The first big lie, he said, involved “outrageous” Palestinian claims that Israel intended changing the status quo at the Jerusalem holy site revered by Jews as the Temple Mount and by Muslims as the Noble Sanctuary, home of Al Aqsa Mosque and the Dome of the Rock. The dispute over the sacred compound has energized Palestinian anger and been at the core of the latest violence.

Seven Israelis have been killed this month in about two dozen attacks by Palestinians mostly armed with knives, but also with guns and a meat cleaver. About a dozen of the suspects have been fatally shot at the scene by the police or Israeli civilians. Close to 20 additional Palestinians have been killed by the Israeli military in the same period, mostly during clashes in the West Bank and along the Gaza border.

Saeb Erekat, the secretary general of the Palestine Liberation Organization and a close aide to Mr. Abbas, said that “Mr. Netanyahu’s attack on President Abbas is a failed attempt to distract from the fact that Palestinian civilians, including children, are being systematically targeted for extrajudicial executions by Israel.”

“The picture of Ahmad Manasra, the Palestinian child who was left to bleed on the street, clearly shows Israel’s disregard to human life,” he added in a statement.

With visual proof that the boy was convalescing in a hospital, however, the Palestinian leadership began backpedaling on Thursday from the claim that he had been executed.

Mr. Erekat stated that he had been run over by an Israeli military jeep. “While he didn’t constitute a threat following the incident,” Mr. Erekat added, in an oblique reference to the stabbing attack, “he was later beaten and abused by the Israeli settler bystanders under the protection of the Israeli armed forces.” There was no evidence of beating in the video.

Earlier on Thursday, the Palestinian Authority distributed what seemed to be a slightly sanitized English translation of what Mr. Abbas had said about the boy in Arabic on TV.

Where, in the Arabic original, Mr. Abbas had accused Israel of “executing our children in cold blood, as they did with this child, Ahmad Manasra,” the English version had Israel “shooting” Ahmad in cold blood instead.

A Palestinian official, who asked not to be identified because he was discussing internal matters, struggled to explain the discrepancy.

He said that Mr. Abbas had been aware that the boy was alive when he made the speech, and that the context and meaning of his Arabic comments had been misread. Mr. Abbas had meant that the Israelis “attempted” to execute Ahmad, the official said.

Mr. Abbas had been speaking about a graphic video that has been viewed nearly three million times on the Facebook page of a Palestinian journalist. The clip was said to have been recorded and shared online by an Israeli bystander, who jeered and heckled the boy after he had been hit by the Jeep.

A statement from Hadassah University Hospital distributed by Israeli government officials on Tuesday had already made it clear that the boy was alive. It stated that “in stark contrast to circulating rumors,” Ahmad Manasra was in stable condition and fully conscious.

Nonetheless, in his televised address broadcast Wednesday night, Mr. Abbas asserted that the boy had been killed.

“We will not submit to the logic of overwhelming force,” Mr. Abbas said in his address, “the policies of occupation and aggression practiced by the Israeli government, and a herd of its settlers, who practice terrorism against our people and our holy sites, our homes and our trees, executing our children in cold blood, as they did with this child, Ahmad Manasra, and other children in Jerusalem and other parts of Palestine.”

To punctuate his point, Mr. Abbas held up a still image from the video of Ahmad Manasra.

Many viewers of the clip have expressed sympathy for the wounded teenager and anger at the Israeli who recorded the video. The unseen Israeli, who was eventually pushed away from the boy by officers, stood over him, cursing and shouting, “Die, son of a whore!”

As the images spread on social media, however, so did misinformation — with many captions asserting, incorrectly, that the boy had been shot and killed, either by an Israeli soldier or a settler.

The episode took place in Pisgat Zeev, which Israelis describe as a Jewish neighborhood in the predominantly Arab East Jerusalem, but which Palestinians call a settlement, as it was built on land seized by Israel’s military from Jordan in the 1967 war. Israel later annexed the eastern half of the city, in a move that has never been internationally recognized.

In a video report accusing Israel of faking evidence of other knife attacks, a reporter for the Palestinian news agency Maan described the clip as evidence of “murder” and claimed in her narration that the video showed the boy lying on the ground when “an Israeli occupation soldier shoots him in the head,” which it does not.

Another copy of the video, subtitled in English and Spanish and viewed thousands of times on YouTube, came with an introduction that said the boy “was shot and injured by a settler.”

On Wednesday, after Ahmad’s father told Channel 2 News in Israel that he did not believe that his son had stabbed anyone — but had simply gone to buy something at a store with his cousin, Hassan — the Israeli police released surveillance camera video that appeared to show the two Arab teenagers carrying knives as they chased a second Jewish man who was stabbed in the neighborhood on Monday.

The new video also showed the Israeli boy who was stabbed falling from his bike after the attack, and Ahmad’s older cousin being gunned down a short time later as he appeared to charge at officers with a knife. Video of Hassan’s body, lying near light-rail tracks in the pavement like his wounded cousin, also circulated on Facebook, which perhaps caused some confusion.

Later Thursday, the P.L.O. delegation to the United States offered another explanation for the discrepancy in Mr. Abbas’s claim. “What exactly happened was confusing the name of Ahmad Saleh Manasra (13) who was wounded and left bleeding on the road side with Israelis calling for his death, and his cousin Hasan Khaled Manasra (15) who was actually killed by Israeli police on that day,” it said.

The statement accused Israeli officials and Israeli and American media outlets of “exploiting this inadvertent mistake to level charges and accusations against President Abbas” that it said were “malicious in nature.”