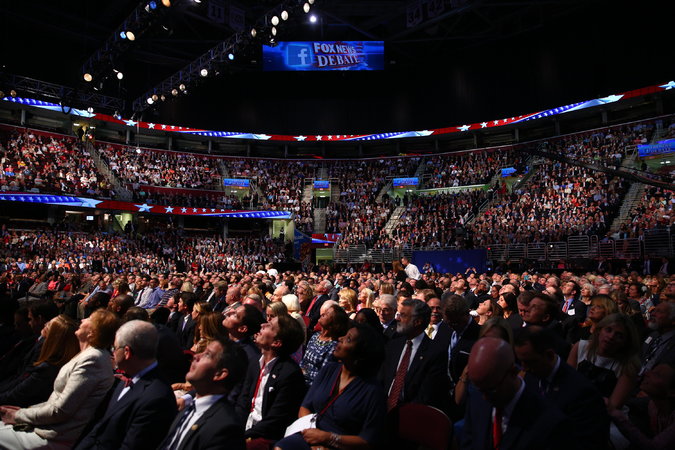 At the first Republican presidential debate, candidates focused on different issues than Democrats did at their debate.Credit Eric Thayer for The New York Times

In one portrait of the nation put forward at the recent Republican presidential debates, America’s moral core is rotting, its citizens tolerating rampant abortions and even the dissection of fetuses for profit.

In the alternate reality described at Tuesday’s Democratic debate, counteracting climate change and protecting African-Americans from police shootings are the most pressing moral imperatives.Republican candidates say capitalism is buckling under high taxes, regulations and social welfare programs. Democrats question capitalism itself, saying Wall Street and the super-rich are starving the middle class of hope.The right has portrayed the southern border as something like a zombie movie, swarming with murderous Mexicans. On the left, illegal immigrants look like hard workers who deserve a path to citizenship.One of the most striking takeaways from the first two Republican debates and Tuesday’s first Democratic debate is that the two parties do not just disagree on solutions to domestic and foreign policy issues — they do not even agree on what the issues are. Offering radically different assessments of the challenges people face, and diametrically opposing policy agendas, the candidates could have been campaigning on different continents.Continue reading the main story

Hillary Rodham Clinton, a Democrat, described gun violence as a scourge that required tough government actions, like background checks and new restrictions on purchases. Jeb Bush, a Republican, framed gun violence as resulting from fractured families and weak sentencing laws. Democrats talked about criminal justice; Republicans dwelled on what they called the criminalization of a Christian county clerk who took a stand against same-sex marriage.

“The parties are definitely not talking about the same United States, which is really nuts, given that voters are so desperate for big solutions that will bring the nation together,” said Christopher Durang, a playwright who specializes in political absurdism and social satire. “You have Carly Fiorina still insisting that videos show babies being carved up, even though this has been disproved. You have the Democrats suggesting that people are doing well but could do better, when a lot of people feel they aren’t doing well at all. You just wonder what country all these candidates live in.”

The jumble of policy differences and priorities reflects the lack of a single dominant issue galvanizing both parties in the 2016 race. The economy was the overriding issue in the presidential elections of 1992, 2008, and 2012, which Democrats won. The Iraq war was the fulcrum in 2004, when George W. Bush was re-elected. The 1996 and 2000 campaigns were largely referendums on Bill Clinton; a strengthening economy and a stolid Republican opponent helped him win re-election, while his vice president, Al Gore, struggled in 2000 to embrace Mr. Clinton’s economic record but disown the scandal that threatened his presidency.

This time around, there is a political vacuum to fill. With no dominant issue to run on or against, and no incumbent seeking re-election, the candidates must first persuade voters to accept their diagnoses before selling them on their prescriptions.

On foreign policy, for instance, Republican contenders portray the United States as a weakling in the eyes of Russia’s president, Vladimir V. Putin (though they do not have clear strategies for dealing with him beyond tough talk or the silent treatment). Democrats see Mr. Putin as overcompensating, exerting military might in Syria to save face for Russia’s poor economy and misadventures elsewhere (but they, too, are torn: Mrs. Clinton said she would confront him like a bully; Senator Bernie Sanders of Vermont would wait for Russians to grow angry at Mr. Putin over their battlefield casualties).

“Given that the Republicans are the party out of power and lack a single major issue, they are casting around for domestic problems and global threats to energize their voters and build enough support to win back the White House,” said Linda L. Fowler, a professor of government at Dartmouth who studies political leadership.

This challenge is exacerbated by the size of the Republican field, with 15 candidates, she said.

“With so many people, voters can’t easily make sense of the complicated political world,” Ms. Fowler said. “So the Republicans try to stand out with sharply worded sound bites because those are more memorable — even if they create more of a divide between candidates and parties.”

The tone of the two parties’ candidates is sharply at odds, too. Democrats on Tuesday were more optimistic, talking of clean energy and debt-free public college, while expressing impatience with the pace of progress on raising the minimum wage and changing campaign finance rules.

Republicans, who barely touched on those issues in their debates on Aug. 6 and Sept. 16, sounded dark notes about same-sex marriage, China, the Iranian nuclear deal and the “complete disaster” that is the Affordable Care Act. And they were more likely than the Democrats to point fingers at one another — and to attack their leading candidate, Donald J. Trump — while finding fault with President Obama and his policies.

“The Democrats are looking ahead toward tomorrow and trying to determine what we should do, while the Republicans are looking at today and talking about what’s wrong,” said Ben Barnes, a Texas Democrat and major party donor. “There are understandable reasons for both. But the debates give off a feeling of deep division that isn’t healthy for a strong country.”

Frank Luntz, a Republican strategist who conducted focus groups during the debates, said that his participants, from both parties, shared “a concurrent feeling of helplessness and the desire to have an impact on the presidential race and the country’s future.” He said Republicans were more critical of one another.

“As of now, the Democrats are set to emerge from the primaries far more unified,” Mr. Luntz said. “If anything, the Democratic debate should be a wake-up call to Republicans to pay attention to just how divisive and negative they are acting.”

Tony Kushner, whose screenplay about an earlier American divide earned him an Oscar nomination for the 2012 film “Lincoln,” said the bellicose language and anti-establishment themes at the Republican debates — that government is bad and elected officials are suspect — put the country “in a very perilous place,” because the candidates appeared to be abandoning policy making and governing.

“Lincoln was effective in explaining war and sacrifice to Americans because of the lawyerly structure of his thought, the pithiness and clarity and wit and measured cadences of his pronouncements, and the lack of any kind of inflammatory rhetoric,” Mr. Kushner said.

“Issues facing the country are always complicated,” he added, “but talking about them calmly and clearly is a crucial part of leadership.”