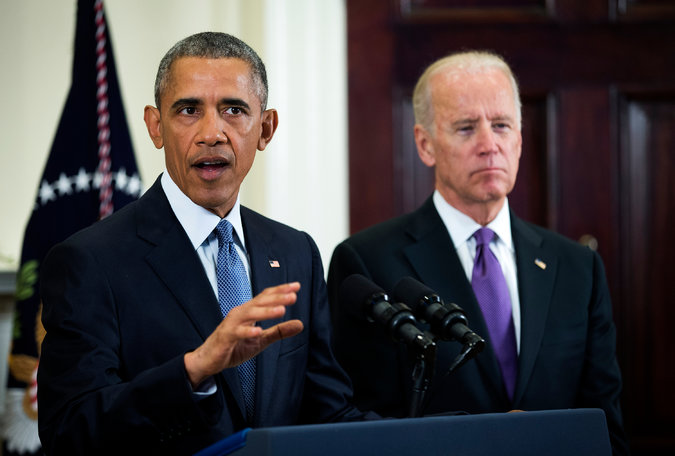 WASHINGTON — As he described the factors that went into his decision to keep American troops in Afghanistan, the one word President Obama did not mention on Thursday was Iraq.

Four years ago, he stuck to his plan to pull out of Iraq, only to watch the country collapse back into sectarian strife and a renewed war with Islamic extremists. Facing a similar situation in Afghanistan, Mr. Obama has decided not to follow a similar course.Whether keeping a residual American force in Iraq would have made a difference is a point of contention, but the president chose not to take a chance this time. In seeking to avoid a repeat of the Iraq meltdown by keeping 9,800 troops in Afghanistan next year and 5,500 after he leaves office, he abandoned his hopes of ending the two wars he inherited.Continue reading the main story Related Coverage

Obama Issues Rare Apology Over Bombing of Doctors Without Borders Hospital in AfghanistanOCT. 7, 2015

While not openly drawing lessons from the Iraq withdrawal, Mr. Obama drew an implicit distinction by emphasizing that the new Afghan government of President Ashraf Ghani, unlike the Baghdad government in 2011, still supported an American military presence and has taken the legal steps to make it possible.

Important speeches illustrate President Obama’s shifting stance on keeping troops in Afghanistan, beginning with his days as a senator.

“In the Afghan government, we have a serious partner who wants our help,” Mr. Obama said in a televised statement from the White House. “And the majority of the Afghan people share our goals. We have a bilateral security agreement to guide our cooperation.”

Lisa Monaco, his homeland security and counterterrorism adviser, later addressed the comparison during a conference call with reporters. “The differences are clear from 2011,” she said. “The Afghan government has asked us to stay, has invited us in, wants to work with us and wants to have an enduring partnership,” she said.

By contrast, said Josh Earnest, the White House press secretary, “in 2011, we didn’t have that effective cooperation from the Iraqi central government.”

In 2011, the Obama administration and the Iraqi government of Nuri Kamal al-Maliki, then the prime minister, negotiated over the possibility of keeping thousands of American troops there after the end of the year but bogged down in a dispute over liability for American forces. Ultimately, Mr. Obama gave up and decided to stick to the original schedule for a 2011 withdrawal enshrined in an agreement reached between President George W. Bush and Mr. Maliki at the end of 2008.

Mr. Obama then went on the campaign trail seeking re-election boasting about pulling out all troops from Iraq. But without an American presence, Mr. Maliki turned increasingly sectarian, repressing Sunnis and aligning more closely with Iran. Critics argue the vacuum left by departing American troops fueled the rise of the Islamic State, also known as ISIS or ISIL. Mr. Obama has since sent back about 3,000 American troops to help a new Iraqi government fight the Islamic State.

Similarly, in Afghanistan, despite years of fighting and a temporary increase in American troops there at the start of Mr. Obama’s presidency, the Taliban has made a comeback, a point starkly underscored by the brief takeover of the city of Kunduz, while the Islamic State has begun making inroads as well.

Mr. Obama’s plan to withdraw all American forces from Afghanistan other than a small embassy contingent by the time he left office always struck national security experts in both parties as untenable, and most assumed he would reverse himself. A bipartisan group of former officials, including two of Mr. Obama’s defense secretaries, released a report this week urging him to keep troops there.

Stephen J. Hadley, a national security adviser to Mr. Bush and a signatory to the report, said on Thursday that Mr. Obama presumably wanted to “avoid giving the Republicans another issue” after the setbacks in Iraq.

“Republicans have made a big point of saying that the withdrawal of U.S. troops from Iraq in 2011 is a contributing factor to the chaos in Iraq, and I think from a political standpoint he didn’t want to saddle Hillary Clinton with having to defend a similar decision to pull out in Afghanistan,” he said.

The White House rejected such interpretations. “I can tell you that politics played absolutely no role in the president’s decision-making here,” Mr. Earnest said.

Even if it did, Republicans in Congress like Senator John McCain of Arizona and Speaker John A. Boehner of Ohio only gave Mr. Obama partial credit, applauding his decision to reverse the withdrawal while contending more forces were still needed.

Security analysts said the new plan may be just enough to preserve the status quo. “Keeping 5,000 U.S. forces in Afghanistan with a training and direct action mission may prevent the country from deteriorating as quickly as Iraq did after the U.S. withdrawal in 2011,” said Seth Jones, an Afghanistan specialist at the RAND Corporation. “But it’s unclear whether it will be enough to turn the Afghan ship around.”

Antiwar activists, however, expressed disappointment that Mr. Obama went back on his word, pointing to the recent bombing of a Doctors Without Borders hospital as an example of the increasing cost of war. Keeping troops for a 15th year, they said, would likely make no more difference than they had during the previous 14 years.

“This is disastrous,” said Phyllis Bennis, a fellow at the Institute for Policy Studies and author of “Understanding ISIS and the New Global War on Terror,” a new book on the Islamic State. “The notion that the lesson of Iraq is keeping a military occupation permanently in place is somehow the answer is absolutely the wrong lesson.”

Mr. Obama has long made it clear he is loath to commit American military forces to the region, especially ground troops, deeming it a largely losing proposition that costs American lives without fixing the problems being addressed. And he repeated on Thursday that he opposes “endless war.”

But he views Afghanistan as more directly tied to American interests than Iraq or Syria, since it was the base from which Al Qaeda planned its attack on the United States on Sept. 11, 2001. And Mr. Obama does not want to pass along to his successor a fraying situation in Afghanistan on top of the current turmoil in Syria and Iraq.

The presence of 5,500 troops — down from more than 100,000 at its peak — may make only a modest difference militarily. But Mr. Obama is gambling that it matters politically by showing that the United States will not give up on the Kabul government and leave a vacuum for other forces to fill.

“We’ve made an enormous investment in a stable Afghanistan,” Mr. Obama said. “Afghans are making difficult but genuine progress. This modest but meaningful extension of our presence — while sticking to our current, narrow missions — can make a real difference. It’s the right thing to do.”