Richard F. Heck, who shared the 2010 Nobel Prize in Chemistry for creating techniques to synthesize complex carbon molecules that are now widely used in developing medicine, electronics and other products, died on Oct. 9 in Manila. He was 84.

His death was announced by De La Salle University in Manila, where he was an adjunct professor. He had moved to the Philippines with his wife, Socorro Nardo, who was Filipino, after retiring from the University of Delaware, where he did much of his research.

He had reportedly been treated for diabetes, pneumonia and cirrhosis of the liver.

Dr. Heck was a pioneer in deciphering how chemical reactions involving catalysts occur. He conducted his Nobel Prize-winning work during the 1960s and early ’70s, when he discovered what is now called the Heck reaction. The reaction uses a palladium catalyst to create bonds between carbon atoms.

“Almost every pharmaceutical that is made today is made using these organo-palladium couplings,” said Douglass F. Taber, a chemist at the University of Delaware. “So if you take a pill for anything, thank Dick.” 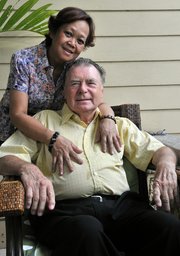 Richard Heck, who shared the 2010 Nobel Prize in Chemistry, poses with his wife, Socorro Nardo, after the prize was announced in 2010.Credit Ted Aljibe/Agence France-Presse — Getty Images

The coupling is also called the Mizoroki-Heck reaction, after the Japanese chemist Tsutomu Mizoroki, whose work Dr. Heck improved on.

“It’s certainly one of the most important reactions developed in the last hundred years,” said Stephen L. Buchwald, a professor of chemistry at the Massachusetts Institute of Technology. Dr. Buchwald said that in a field in which many reactions appear promising on paper but fail in real-life situations, the Heck reaction “worked like a dream.”

The chemists who shared the Nobel with Dr. Heck were Akira Suzuki of Hokkaido University in Japan and Ei-ichi Negishi of Purdue University.

Richard Fred Heck was born on Aug. 15, 1931, in Springfield, Mass. When he was a teenager, his parents moved to the suburbs of Los Angeles, settling in a house with a barren lot. While planting orchids there, Richard would often think about the chemicals in the fertilizer, a fascination that prompted him to study chemistry in school.

He completed his undergraduate degree at the University of California, Los Angeles, in 1952, and received a doctoral degree from that institution in 1954.

He first reported creating carbon-carbon bonds with palladium in 1968 while working at Hercules, a chemicals and munitions manufacturer in Wilmington, Del. He left the company in 1971 and continued his work at the University of Delaware.

Like many organic chemists, Dr. Heck was on a quest to make important molecules more efficiently. Doing so involves identifying inexpensive, easily available starting materials and then performing experiments to convert the material into valuable products.

Dr. Heck wanted to find a catalyst that would make the construction process faster. Constructing complex organic molecules is like building and decorating a house. The conventional way is to create the basic structure and then put up walls, carpet, paint and pictures. Similarly, to make a complex organic molecule, an organic chemist begins with a carbon skeleton and then decorates it, through chemical reactions, with molecules called functional groups.

There are many steps involved in creating a particularly intricate organic molecule. But by using a palladium catalyst, Dr. Heck found that he could bypass several steps and directly combine two carbon atoms to form his desired molecule. Extending the home-building analogy, the process is akin to taking half of a fully decorated house and combining it with another half of a decorated house to produce a finished one.

“Heck changed the paradigm, because you could now build functionalized pieces and put them together,” Professor Taber said.

The mechanism was faster, simpler and cheaper than previous methods of shepherding carbon atoms together. The finding had an enormous effect on the field of drug delivery, leading to more efficient ways of making treatments for asthma, migraines, H.I.V. and cancer, among other illnesses.

The Heck reaction was one of the first metal-catalyzed reactions to use a small amount of expensive metal to form carbon-carbon bonds. It helped make strides in the field of organometallic chemistry, which combines organic and inorganic chemistry. It also helped revolutionize DNA sequencing by enabling the marking of DNA bases with organic dyes.

Joseph M. Fox, a chemist at the University of Delaware, said that Dr. Heck had conducted many of his early palladium experiments with his own hands and, 30 years later, could still recall every detail, from the color of the liquids to the temperature of the oil bath. He also said that Dr. Heck had been an excellent mentor who molded many students into organic chemists.

Dr. Heck and his wife settled in Manila after he retired from the university in 1989. She died in 2012. Since then, her family had cared for him while he underwent medical treatment.