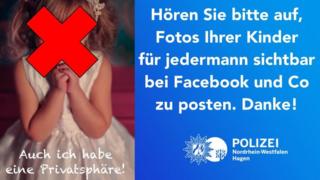 A German police force has warned parents against posting photographs of their children to Facebook publicly.

The pictures could be copied and altered by paedophiles or simply prove embarrassing to the children in later life, Hagen Police said, in a message on their own Facebook page.

Parents were advised to ensure that privacy settings allowed only their Facebook friends to view the photos.

A police officer and spokesman for Hagen Police told the BBC that the response to the post had been "amazing" and that they estimated it had been viewed by more than 12 million people.

"We want to tell all users that it is important to be careful with everything they do on the internet," said Hanki Ulrich.

"It's better to think twice - the internet never forgets."

Mr Hanki added that the post had not been inspired by any recent criminal cases or paedophile activity in Hagen.

Child protection charity the NSPCC said in a statement: "All parents should feel free to enjoy taking photos of their children and sharing them with friends and family. However, we should all be careful when posting photos online.

"We know that sex offenders are able to doctor innocent family photos of children, and developments in photo editing software have made this easier.

"So if parents do publish photos of their children online, they should take care to ensure that they have checked their privacy settings and are happy about who can see and share them."

The statement added that if parents were worried a photograph of their child had fallen into the wrong hands, they should contact the Internet Watch Foundation, the Child Exploitation and Online Protection Centre (Ceop) or NSPCC helpline on 0808 800 5000.