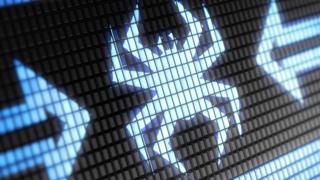 Readers of the Daily Mail's website were shown fake advertisements that linked to malware, a security company has discovered.

Bogus ads for shoes briefly appeared among the selection of banners displayed on DailyMail.com.

Instead of online shops, the advertisements linked to malware that can expose computers to "ransomware".

Ransomware encrypts files on a victim's computer and asks for a payment to decrypt them again.

The practice is known as "malvertising".

Security company Malwarebytes made the discovery last week and published a report about its findings online.

The report says Malwarebytes contacted the Daily Mail and relevant advertising networks about the issue on Friday.

By Monday morning, the security company was informed that the fake ads had been removed.

The banners, purporting to be for an online shoe retailer, were published via a bogus ad server.

From there, they were distributed via an advertising network that presents ads to readers on the Daily Mail's website.

If a user clicked on one of the ads, they would be redirected to a well known piece of malware called the Angler Exploit Kit, which attacks vulnerabilities in Internet Explorer and Flash.

There are various ways to protect yourself from ransomware, according to Tony Berning, senior manager at software company Opswat.

"To protect against ransomware, users must back up their data regularly," he said.

"In addition to this, an important defence against ransomware is the use of anti-virus engines to scan for threats.

The Daily Mail did not immediately provide a comment.