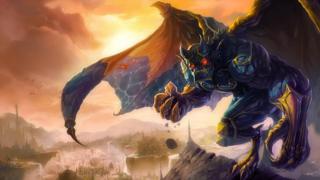 Just one more game, I tell myself. Just to be sure I understand how it all works.

I do not glance at the time because I do not want to think about how long I've been playing.

One more game should mean I level up and break into another tier of gameplay. And the masteries and runes I can add will start to make a big difference to my chosen champion.

And then, I realise, I'm supposed to be playing League of Legends (LoL) just to write about it. Not to get sucked into its playful embrace.

But the game has hooked my inner geek. The one that likes crunching numbers, spouting jargon and working out combinations of gear and abilities that make game characters most effective.

And it is then I realise why League of Legends has become, and stayed, so popular.

It first appeared in late 2009 and has become one of the most popular PC games in the world. Statistics suggest 27m people play it every day with around 7.5m people play it simultaneously at its peak hours of popularity.

"It's a really interesting phenomenon," said Tim Edwards, editor of the PC Games N website, who said Riot Games, the creator of LoL, had worked hard to ensure the games longevity with regular updates, add-ons and extras.

That stood in contrast to the way most other game makers treated their creations.

"Most game developers will make a game, knock it out and then move on to the next one," he said.

Riot has put all its energy into making LoL ever more addictive and into attracting new players.

"It's grown deeper and more complicated as time has gone on," he said. "It's hard to explain how hard it is and how baffling it can be to new converts."

The game pits small teams of player-controlled champions against each other on a small number of maps. A team wins if it can destroy the heart of their rivals' base, known as the nexus, before theirs is destroyed. Characters, called champions, travel down different routes to their opponents' base destroying turrets and minions that serve their rivals.

Some champions have swords to attack but others use ranged weapons or spells. They also have a range of abilities that get boosted as players accumulate in-game gold. They can also buy magic items to improve their health, defence, attack or spell power.

From this, relatively, simple starting point has grown a very complicated game. The complications arise because there are now about 100 different champions that can be boosted with runes and masteries to make them more effective. Then there are in-game extras that can be gained that can boost allies or slow opponents.

"You need to know and understand all of the champions' abilities so you can fight effectively against them," said Mr Edwards.

And that is the other hook that Riot has worked hard to hone - competitive play. It spends a lot of time cultivating and curating the massive community surrounding LoL. It has also developed a ranking system that does a good job of matching players with other gamers of a similar skill.

That is why newbies like me got a good game and felt like they were contributing, in some small way, to the success of the team. Even if my team lost. Which it did. A lot.

But that feeling that it mattered and that a tiny advantage can help to turn a rout into a fightback explains, partly, why there are so many videos out there of people playing LoL. It also explains why its success has mirrored the rise of gaming video culture that centres around Twitch and YouTube.

Also, said Mr Edwards, Riot has been behind the main LoL tournaments.

"Most e-sports tournaments have been hosted by third parties that are not directly related to the makers of the games," said Mr Edwards. By contrast Riot has stayed involved and put up millions of dollars in prize money for winning teams.

For Michael O'Dell, who manages two professional LoL teams, the game's appeal is easy to explain.

"It's just a lot of fun," he said. "It's very satisfying when you make that skilled shot count," he said.

The team-based element helps in the tournaments too because, like other sports, each game has several distinct phases that players have to recognise and capitalise on to win. The game is also regularly updated which can mean changes both big and small to champions' abilities.

Pro-players spent a lot of time working through different scenarios to find out the best way to handle them. This is important because the first stage of any competitive battle is the "pick and ban" phase which see players select their champion for that match.

Teams will try to trick the opposition into picking champions they know inside out so they can undercut their effectiveness.

"There are a lot of mind games played around the pick and ban phase," said Mr O'Dell.

Riot has demanded that every pro-team has a full-time coach, said Mr O'Dell, which has really changed the way people play.

"We have a coach and analysts in the background supplying information about the games, the updates, about the other teams, and how they are practising," he said. "It's really got quite complex."

And don't I know it.

The quarter-finals of the League of Legends World Championships are being streamed on BBC Three over three days.

Watch here on Friday, here on Saturday and here on Sunday.

The World Championships concludes on 31 October in Berlin.