Either all Fandango users are really nice, or something's going on with the site's movie reviews. According to a recent report by FiveThirtyEight, almost no reviews on Fandango's five-star rating scale have received fewer than three stars in the past year.

After noticing an unusually high rating for the recent Fantastic Four (largely considered to be a flop), FiveThirtyEight's Walt Hickey pulled the data from 510 movies reviewed on Fandango.com that had tickets go on sale within the last year. They found that of the 438 movies with at least one review, a whopping 98 percent had at least three stars, and 75 percent had at least four stars. When Hickey looked at the 209 movies with 30 or more reviews, none had below a three-star rating.

Ars Technica notes one reason for this inflation is that the star ratings on Fandango are rounded up to the nearest half, meaning some films got a 0.3, 0.4, and even a 0.5 boost from their original score. A Fandango spokesperson told FiveThirtyEight this was the result of a "software glitch" that would soon be fixed.

Still, a rounding glitch doesn't account for the incredible rarity of one- and two-star reviews on Fandango. Hickey notes in his report this could be a form of "buyer's remorse" — no one wants to knock a movie they spent $30 to see. I did find a one-star review for The Martian that seems to suggest there's just one very enthusiastic Fandango user throwing off the curve for everyone else. 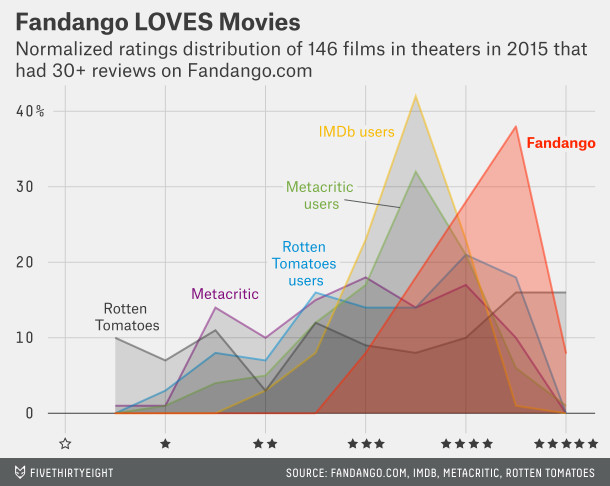