(Newser) – "After 5,000 years of using the same technology, it's time to make shaving easier, safer, and greener." Apparently, more than 20,000 supporters agree with this statement by a Skarp Laser Razor rep, because they donated more than $4 million to a Kickstarter campaign for a shaving implement that promised to eliminate the pain, irritation, and mediocrity of regular shaving, Business Insider reports. Alas, the idea may be ahead of its time. After all those donations poured in, Kickstarter suspended the campaign because the makers don't have a working model that's up to snuff, reports the Register. "We've concluded that it is in violation of our rule requiring working prototypes of physical products that are offered as rewards," Kickstarter says in an email sent to backers.

A subsequent Business Insider story sums up, "In short, the service is afraid it's a scam." No word yet from the manufacturers, who had posted of a video of the razor in action, though it doesn't appear to be doing a bang-up job. The Skarp razor—co-founded by Morgan Gustavsson, who 25 years ago helped invent a popular laser hair-removal technology still used today—had promised to deliver a close shave with zero nicks, razor burn, or other irritations, without the expense of constantly replacing or mucking up the environment with billions of those unrecyclable cartridges. The makers had said they wanted their razors to market by March 2016 for $159. (You shouldn't shave every place on your body, apparently). 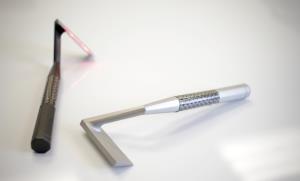