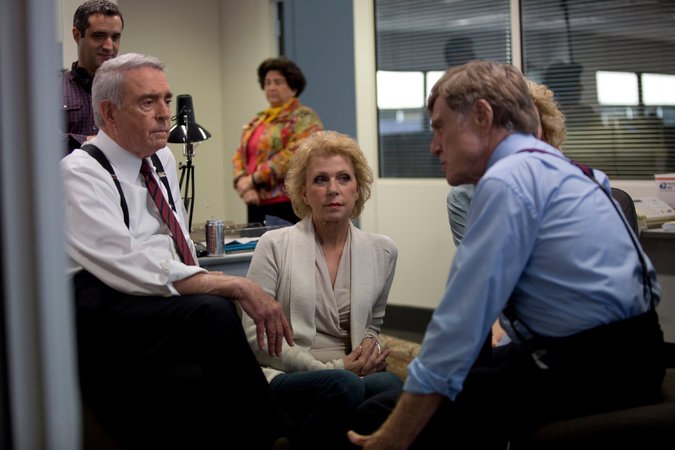 From left, Dan Rather, Mary Mapes and Robert Redford, who portrays Mr. Rather, on the set of the film “Truth.”Credit Lisa Tomasetti/Sony Pictures Classics

Last week, the former CBS News producer Mary Mapes was back on West 53rd Street at the Museum of Modern Art for the premiere of the movie “Truth.” Ms. Mapes, the author of the book that inspired this movie, got a Hollywood welcome from an adoring crowd and blew a kiss to the film’s director and screenwriter, James Vanderbilt.

The warm reception was a considerably different scene from what Ms. Mapes confronted just across the street 11 years earlier, at CBS’s Midtown headquarters, where the story of “Truth” took shape.

Back then, she sat in a conference room and was asked by an independent panel hired by CBS to explain how a “60 Minutes II” report that she produced had gone wrong.

The movie, which opens Friday, is about Ms. Mapes’s segment that was built around documents suggesting President George W. Bush had received preferential treatment for his National Guard service in the early 1970s. But in the days following the broadcast, the documents were subjected to withering scrutiny, and within two weeks, and in the heat of the 2004 presidential election, CBS said it could not authenticate them.

The story unraveled, and so did the team that produced it: CBS apologized, three producers resigned, Ms. Mapes was fired and would never return to television news. Two months after it aired, Dan Rather, the “CBS Evening News” anchor and the correspondent for the segment, announced he was retiring. Months later, “60 Minutes II” was canceled.

It was one of the earliest examples of the power of the Internet and the information it makes readily available, which enabled an instant review of a fabled institution’s reporting. In the years since, the episode was, at least in some quarters, considered a settled matter — this was flawed reporting.

Now the movie, which stars Cate Blanchett as Ms. Mapes and Robert Redford as Mr. Rather, will reopen a conversation about a journalistic controversy that had faded away, especially since it relies on the viewpoint of Ms. Mapes. She and Mr. Rather have long claimed their report was true, if imperfectly executed. The movie gives voice to their cause.

“These guys had to live with being shut down for years and years,” Mr. Redford said at a New York Times panel discussion last week, discussing Mr. Rather and Ms. Mapes. “The idea of playing a role in a project that would open things up and give them their day in court, which I thought they well deserved, was very appealing to me.”

The battle lines are clear: CBS said it could not prove the documents were real and the story was bogus as a result; Mr. Rather and Ms. Mapes maintain that no one can prove that they were forgeries. The movie relies on information that has long been in the public record.

The prospect of revisiting the case was surprising to many in journalistic circles and not at all appealing to CBS. A network spokesman said in a statement that it was “astounding how little truth there is in ‘Truth.’ There are, in fact, too many distortions, evasions and baseless conspiracy theories to enumerate them all.”

Andrew Heyward, the former president of CBS News, who was not portrayed kindly in Ms. Mapes’s book, said he had not seen the movie but was familiar with its story line. He expressed outrage in a telephone interview. “It takes people responsible for the worst embarrassment in the history of CBS News, and what was at the time a grievous blow to the credibility of a proud news organization, and turns them into martyrs and heroes,” he said. “Only Hollywood could come up with that.”

Mr. Rather, in a brief telephone interview, said, “I just hope people see the movie and make up their own mind.”

Both sides agree that the story was rushed. “60 Minutes II,” which was created in an era when networks were crazed about newsmagazines, aired on Wednesday nights. But it was facing two consecutive weeks of pre-emptions, and story executives were concerned that if they waited any later than early September it would be too close to the 2004 presidential election.

The story ran only days after CBS received the documents, on Sept. 8, 2004.

Shortly after the broadcast came accusations, particularly on right-wing websites, that the documents were forgeries. That spiked an initial wave of skepticism, and within two weeks CBS had lost confidence in a couple of key sources. One source, who supplied the documents, said that he lied to CBS about how he obtained them. The network found itself without a way to authenticate them.

Ms. Mapes, who declined to be interviewed for this article but spoke at The New York Times panel, acknowledges mistakes in the reporting but still defends the story.

“There is a tremendously strong perception that we bungled, bungled, bungled very badly,” she said at the discussion. “I think we were within the normal journalistic range of bungle.”

The movie faithfully follows Ms. Mapes’s retelling, and glamorizes the often gritty act of her team’s reporting. In her book, Ms. Mapes forcefully casts Viacom, CBS’s corporate parent at the time, as a villain that buckled to pressure from the Bush administration, a theme the movie echoes at times.

Mr. Vanderbilt said that he did not want to impose a specific point of view in the movie but instead wanted to simply raise questions.

“As a filmmaker I’m not interested in re-prosecuting something, so much as this was a fascinating story and telling it through these characters eyes was the most interesting way in,” he said. At the center of it all, he said, “are these documents, and there is an unknowable mystery about them.”

The mystery of those documents was a more significant problem for CBS.

“Journalism is based not on assertion but on verification,” Mr. Heyward said. “You can’t wish facts into existence. In this case, the central facts, the documents, are in grave dispute to the point where there’s a lot of evidence that they may not have been real. And enough evidence that we apologized and said we shouldn’t have aired it.”

Journalists, in general, have largely agreed with this point: If documents are a main part of the story, they must be verified.

“They didn’t do the No. 1 basic thing that you’re supposed to do when you’re dealing with documents, and that is to have them checked, proved,” said Richard Wald, the former president of NBC News and a journalism professor at Columbia University. “They didn’t do it.”

Mr. Rather gave credit to critics who attacked “the process” by which the story was reported.

“Once again, we’re talking about the process in which it was put together and what happened in the wake of the story,” he said. “And this is a gentle, a very gentle reminder, that the story was true. The basic facts of the story were true.”

If there is one thing all sides have agreed on, it is that they could not have anticipated the way the story would come undone. “It’s the first time the Internet really rose up and affected a story with the speed it did and with the power it did,’’ Mr. Vanderbilt said. “CBS and Dan and Mary were completely unprepared for that. That was only 11 years ago, and now that’s every day for us.”