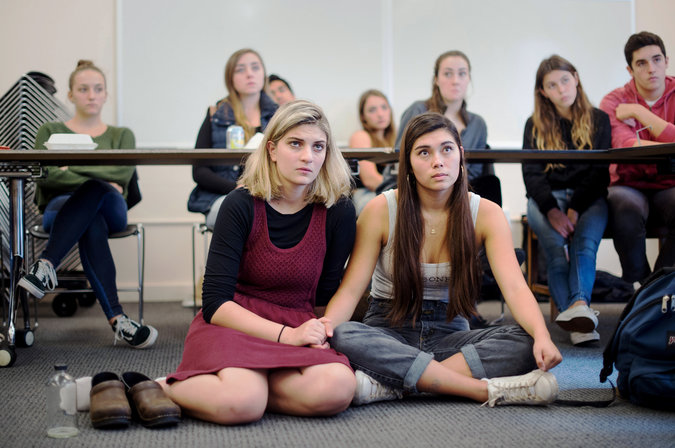 Juniors and seniors at the Urban School of San Francisco at a forum on affirmative consent.Credit Noah Berger for The New York Times

SAN FRANCISCO — The classroom of 10th graders had already learned about sexually transmitted diseases and various types of birth control. On this day, the teenagers gathered around tables to discuss another topic: how and why to make sure each step in a sexual encounter is met with consent.

Consent from the person you are kissing — or more — is not merely silence or a lack of protest, Shafia Zaloom, a health educator at the Urban School of San Francisco, told the students. They listened raptly, but several did not disguise how puzzled they felt.“What does that mean — you have to say ‘yes’ every 10 minutes?” asked Aidan Ryan, 16, who sat near the front of the room.“Pretty much,” Ms. Zaloom answered. “It’s not a timing thing, but whoever initiates things to another level has to ask.”The “no means no” mantra of a generation ago is being eclipsed by “yes means yes” as more young people all over the country are told that they must have explicit permission from the object of their desire before they engage in any touching, kissing or other sexual activity. With Gov. Jerry Brown’s signature on a bill this month, California became the first state to require that all high school health education classes give lessons on affirmative consent, which includes explaining that someone who is drunk or asleep cannot grant consent.Photo 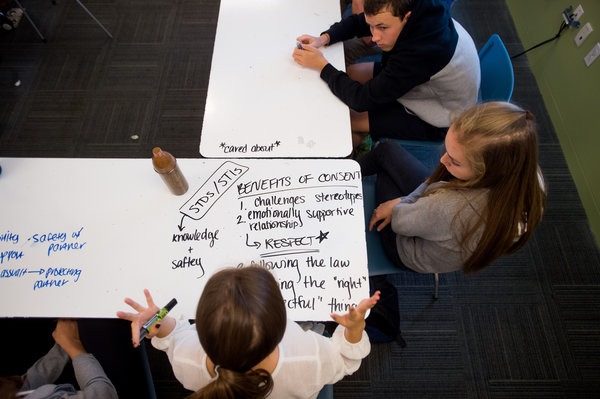 A new law has made California the first state to require that all high school health education classes teach affirmative consent. Sophomores at the Urban School of San Francisco at a class.Credit Noah Berger for The New York Times

Last year, California led the way in requiring colleges to use affirmative consent as the standard in campus disciplinary decisions, defining how and when people agree to have sex. More than a dozen legislatures in other states, including Maryland, Michigan and Utah, are considering similar legislation for colleges. One goal is to improve the way colleges and universities deal with accusations of rape and sexual assault and another is to reduce the number of young people who feel pressured into unwanted sexual conduct.

Critics say the lawmakers and advocates of affirmative consent are trying to draw a sharp line in what is essentially a gray zone, particularly for children and young adults who are grappling with their first feelings of romantic attraction. In he-said, she-said sexual assault cases, critics of affirmative consent say the policy puts an unfair burden of proof on the accused.

“There’s really no clear standard yet — what we have is a lot of ambiguity on how these standards really work in the court of law,” said John F. Banzhaf III, a professor at George Washington University Law School. “The standard is not logical — nobody really works that way. The problem with teaching this to high school students is that you are only going to sow more confusion. They are getting mixed messages depending where they go afterward.”

But Ms. Zaloom, who has taught high school students about sex for two decades, said she was grateful for the new standard, even as she acknowledged the students’ unease.

“What’s really important to know is that sex is not always super smooth,” she told her 10th graders. “It can be awkward, and that’s actually normal and shows things are O.K.”

The students did not seem convinced. They sat in groups to brainstorm ways to ask for affirmative consent. They crossed off a list of options: “Can I touch you there?” Too clinical. “Do you want to do this?” Too tentative. “Do you like that?” Not direct enough.

“They’re all really awkward and bizarre,” one girl said.

“Did you come up with any on your own?” Ms. Zaloom asked.

One boy offered up two words: “You good?”

Under the new law, high school students in California must be educated about the concept of affirmative consent — but they are not actually being held to that standard. So a high school student on trial on rape charges would not have to prove that he or she obtained oral assent from the accuser. That was the case with a senior at the elite St. Paul’s School in New Hampshire this year who was accused of raping a freshman. The senior was acquitted of aggravated sexual assault but found guilty of statutory rape — sex with a minor.

As for college students, the law passed last year in California does not change the way sexual assault cases are prosecuted in criminal courts, only in the way they are handled by colleges, which are permitted to use affirmative consent as a standard. 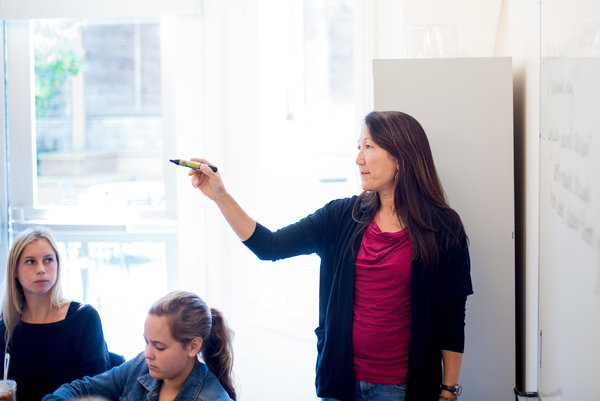 Juniors and seniors at the Urban School of San Francisco at a forum on affirmative consent.Credit Noah Berger for The New York Times

Last year, Corey Mock, a student at the University of Tennessee-Chattanooga, was expelled after officials there found him guilty of sexual misconduct because he could not prove he had obtained verbal consent from a woman who accused him of sexual assault. But a Davidson County Chancery Court judge ruled in August that the university had “improperly shifted the burden of proof and imposed an untenable standard upon Mr. Mock to disprove the accusation.” The judge called the university’s ruling “arbitrary and capricious.”

In another case, a former student at Clark University in Worcester, Mass., who was evicted from his dormitory room after a student accused him of rape, filed a lawsuit in federal court in August against the university and several administrators. The former student, identified in court records as John Doe, argued that he had been denied the rights promised in the student handbook and that the adjudicators of his case had ignored text messages that supported his view of the encounter.

“Sexual violence has always thrived in the gray areas of the law,” Mr. de León said. “What we want to create is a standard of behavior, a paradigm shift as much as a legal shift. We’re no longer talking about the old paradigm of the victim being blamed for their own behavior.”

But among teenagers, who are only beginning to experiment with their sexuality and have hazy ideas of their own boundaries, the talk tends to be about “hooking up” and what the new rules are. “Kids are still establishing patterns of behavior, and they have a lot of specific concrete questions,” said Ms. Zaloom, who has written a curriculum for affirmative consent programs that is being used throughout the country.

Students will ask, “Can I have sex when we are both drunk?” she said. “I get this one a lot: If I hook up with a girl and the next day she decides she didn’t want to do it, then what do I do?”

Ms. Zaloom will typically use such questions as a way to begin talking about the benefits of sexual partners’ knowing each other. But sometimes, there are no straightforward answers, she said. “We’re trying to show them very explicitly that sex has to include a dialogue,” she added, “that they have to talk about it each step of the way.”

One 10th-grade girl asked about approaching someone about a casual encounter. “What if it’s just a one-time thing?”

Another girl chimed in, “If you don’t care about a person too much, you might not be inclined to listen.”

Ms. Zaloom suggested making clear plans with friends ahead of time, like making pacts to leave parties together. And she urged them to have conversations with potential sexual partners “before you get swept up in the moment.”

“How do we even start a conversation like that?” one boy wondered.

An earlier version of this article misspelled the given name of a 10th-grade student, and had his age wrong; he is Aidan Ryan, not Aiden, and he is 16, not 15.