The case adds yet another terrifying layer to the Ebola outbreak: A Scottish nurse who recovered from Ebola 10 months ago has been rehospitalized and is now critically ill, the Royal Free Hospital in London reported Wednesday.

Scientists have long known that the Ebola virus can persist for months in certain tissues of the body that are relatively protected from the immune system, including the eyes and the testes.A report published Wednesday in The New England Journal of Medicine, for instance, found traces of Ebola in some men’s semen up to nine months after they fell ill. Another report in the same journal presented additional evidence that an Ebola survivor in Liberia had transmitted the disease to a sexual partner roughly six months after having developed symptoms.Yet the case of the nurse, Pauline Cafferkey, points to how much is still unknown about the virus and its long-term effects.Doctors are grappling with why Ms. Cafferkey’s current illness happened so many months after her initial infection in Sierra Leone, where she had gone as a volunteer, and why similar cases have not been well documented in the three West African countries that are now home to thousands of survivors.Photo 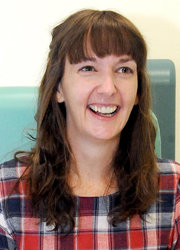 Pauline Cafferkey had seemed to recover from Ebola.Credit Lisa Ferguson/Scotland on Sunday, via Press Association, via Associated Press

Speculation has focused on the potential role of Ms. Cafferkey’s severe initial illness, and even on the experimental treatments she and the few other patients treated in Western hospitals received.

At the same time, the case adds to concerns about the ramifications of the continuing outbreak in West Africa. Two new cases in the past two days in Guinea have dashed hopes that the outbreak, which has killed more than 11,000 people, was finally ending.

“It’s reminded people that the consequences go on so much longer for survivors,” said Dr. Bruce Aylward, who heads the World Health Organization’s Ebola effort. “It’s really spurred concern we make sure the needs of these people aren’t lost.”

The Royal Free Hospital, which last Friday referred to Ms. Cafferkey’s illness in a news release as “an unusual late complication of her previous infection,” said Wednesday that she was being treated for Ebola. The virus, several experts said, managed to somehow persist and apparently re-emerged to cause a severe disorder of her central nervous system. Dr. Aylward said her spinal fluid had tested positive for traces of Ebola.

“This isn’t a recurrence of Ebola hemorrhagic fever; this is clearly a meningitis-like syndrome, a neurological syndrome, which is a result of the lingering of Ebola virus,” said Stuart T. Nichol, chief of the viral special pathogens branch at the Centers for Disease Control and Prevention in Atlanta. He stressed that the complication appeared to be extremely rare.

“We’d think the likelihood of these types of events is probably higher with cases where patients are very severely, critically ill,” Dr. Nichol said. He theorized that very high concentrations of virus in the blood could seed areas of the body that are harder for the immune system to reach.

Ms. Cafferkey had seemed healthy until very recently and went to a clinic at a hospital after complaining of feeling sick, according to British media reports. The clinic sent her home, the reports said.

Col. Foday Sahr, commanding officer of the joint medical unit in Sierra Leone, said that of 290 registered Ebola survivors being followed weekly at a military hospital in Freetown, one or two exhibited neurological symptoms including weakness on one side of the body, but that no delayed cases of encephalitis or meningitis had been documented.

Still, it is possible that doctors have not found more of these cases in the past because they have not been looking for them. “That’s not how we thought the disease worked,” Dr. Bausch said.

Dennis Khakie, 42, died suddenly in September nearly a year after having recovered from Ebola at a treatment unit run by the International Medical Corps in Liberia. “He just started convulsing,” said Sam Siakor, Mr. Khakie’s nephew and a former nurse aide at the unit.

While stories of patients like this occasionally emerge, Dr. Bausch said, “trying to figure out what they died of and whether it’s really related to Ebola is difficult.”

A child who had recovered from Ebola and was discharged from a Doctors Without Borders treatment center in Liberia last year soon developed a fever, “tested positive again, and had an encephalopathy,” a brain disorder, said Dr. Armand Sprecher, an Ebola expert with the charity.

Perhaps the most relevant case is that of Dr. Ian Crozier, who contracted Ebola in Sierra Leone and, less than two months after recovering, developed a severe inflammatory condition deep inside his left eye, which was harboring the Ebola virus.

While virus was not found in Dr. Crozier’s blood or cerebrospinal fluid, a scan of his brain indicated that he had suffered from encephalitis, Dr. Bausch said. In West Africa, patients as ill as Dr. Crozier or Ms. Cafferkey might not have survived “to experience these later manifestations,” he surmised.

One possibility is that late complications could be an unanticipated consequence of experimental treatments that include antibodies, like ZMapp, that help remove the virus from the patient’s blood, but are not thought to be capable of crossing from the bloodstream into the brain.

By decreasing the amount of virus in the blood, “you perhaps blunt the immune system,” Dr. Bausch said. “It’s all speculation, but it’s scientifically sound speculation.”

When patients with a different hemorrhagic fever caused by the Junin virus were treated with blood plasma containing antibodies from survivors, around 10 percent of them later developed neurological complications that were in rare cases severe, researchers reported in the 1970s. In a study of antibody treatments for Rift Valley Fever, some patients also developed brain disease, Dr. Nichol said. However the timeline was within days or weeks of the initial infection, not months.

While Ms. Cafferkey’s contacts are being monitored in Britain, experts said that the type of illness she developed was unlikely to pose a threat to others. “The huge concern everyone has is that this does not result in a new wave of stigmatization of survivors, because of course it’s a very, very different risk, a personal risk,” Dr. Aylward said.