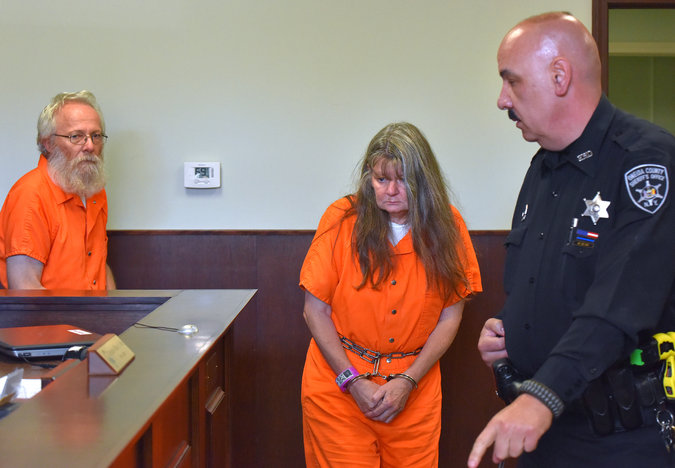 Bruce T. Leonard and Deborah Leonard were charged on Tuesday with first-degree manslaughter in the death of their son Lucas.Credit Mark Diorio/Observer-Dispatch, via Associated Press

NEW HARTFORD, N.Y. — To its neighbors in this upstate town, Word of Life Christian Church presented itself as a constant curiosity: an imposing but tidy former schoolhouse whose occupants kept to themselves, almost never opening their doors or their mouths, secluded behind a closed entrance.

Over the last three days, however, the inner life of that secretive sect suddenly spilled into the outside world. On Sunday evening, the authorities said, two teenagers — brothers and the sons of two members of Word of Life — were called into a sanctuary and savagely beaten by at least a half-dozen people, including their parents and older half sister.

“Both brothers were continually subjected to physical punishment over the course of several hours, in hopes that each would confess to prior sins and ask for forgiveness,” Chief Michael S. Inserra of the New Hartford Police Department said at a news conference on Wednesday.

It is not clear what those sins were, but for several hours, into Monday morning, punches and kicks landed on the brothers’ stomachs, genitals, backs and thighs, as the so-called counseling session turned into a case of manslaughter and assault. 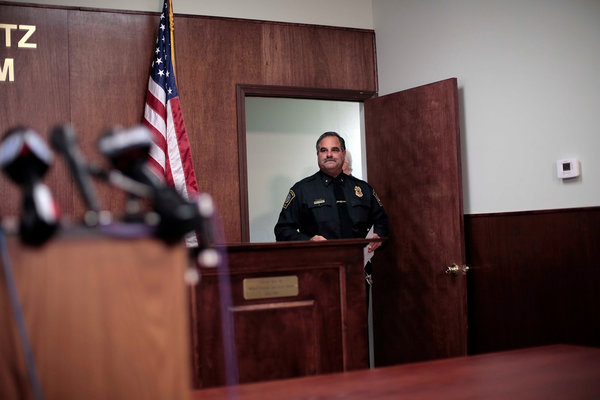 Michael S. Inserra, the chief of the New Hartford Police Department, at the news conference on Wednesday.Credit Nathaniel Brooks for The New York Times

On Monday afternoon, Lucas Leonard, 19, was pronounced dead at a hospital, after being found unresponsive and not breathing by other church members, Chief Inserra said. Hours later, his brother, Christopher, 17, was found to be on the second floor of the church, suffering from serious injuries. He remains hospitalized.

“He wasn’t in hiding, but he wasn’t making himself available,” Chief Inserra said. “And the family members were not telling us where he was.”

The community that surrounded the church had regarded it with trepidation, trading stories of odd behavior and awkward interactions.

But when the news of the attack emerged on Tuesday, the reality of life within those walls was much darker than many could have imagined.

“Everybody in the whole town always said there’s something strange going on there; everybody felt that way,” said Connie Toukatly, 76, who lives across the street. “But it’s so sad that it came to this point.”

The authorities here on Wednesday were still untangling the exact nature of the attack and suggested that more arrests were to come.

The teenagers’ parents, Bruce T. Leonard, 65, and Deborah Leonard, 59, who live in nearby Clayville, have been arrested and charged with first-degree manslaughter in their son’s death. Four other church members, including the teenagers’ half sister, Sarah Ferguson, 33, were also arrested and face felony assault charges.

“We’re not alleging they intended to kill their son,” Scott D. McNamara, the Oneida County district attorney, said at a news conference. “We’re just alleging they were trying to seriously hurt their son, and ultimately he died from those injuries.”

Lawyers entered pleas of not guilty for all six suspects on Tuesday. A lawyer for Ms. Leonard, Devin Garramone, said she had belonged to the church for several decades. 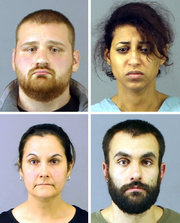 The others arrested were, clockwise from top left, Joseph Irwin, 26; Sarah Ferguson, 33, who is the victim's sister; David Morey, 26; and Linda Morey, 54.Credit New Hartford Police Department, via Associated Press

“I don’t think this is a clear-cut case of guilt,” Mr. Garramone said on Wednesday. “At first it might look like that, but you have a mother — I don’t think she inflicted these injuries on her son. There were other people involved.”

Messages left for a lawyer for Bruce Leonard were not immediately answered.

At least seven children, from about 2 to 15 years old, had also been taken from the church site, the police said, including four of Ms. Ferguson’s children, and placed in foster care.

The authorities in New Hartford, a Utica suburb west of Albany, were trying to determine the exact organization, leadership and teachings of Word of Life, which had little presence online and has few public records.

Lt. Timothy O’Neill of the New Hartford Police Department said the authorities believed that the church was led by Traci Irwin, referred to as Mother by some members. Ms. Irwin’s husband, Jerry Irwin, was also involved in the church, and the current pastoral leader of the group was her daughter, Tiffanie, Lieutenant O’Neil said.

Another child, Joseph Irwin, 26, was among those arrested and charged with assault, as were two other congregants: David Morey, 26, and Linda Morey, 54, both of Utica.

Members of the Irwin family could not be reached for comment.

One advertisement was written from the perspective of the dogs. “We are part of the family of Jerry and Traci and live in beautiful upstate N.Y.,” the post reads. “We live in the house with them, sleep in their comfy bed and raise our own children right among them.” The post adds, “Mom and Dad pastor a church, so we get to see lots of people and even get to go to church with them sometimes.”

The Leonards were apparently longtime members of the church, part of what Lieutenant O’Neill called an immersive religious environment. “This was a way of life,” he said. “Their church life, if you can call it that, was the center of their world.” Lucas and Christopher were home-schooled, said Ron Wheelock, the superintendent of the Sauquoit Valley Central School District.

Terry Windham, 38, a cousin of Lucas and Christopher who lives in Texas but visits the family several times a year, said the elder Mr. Leonard “was close to his kids.”

“None of this makes any sense,” Mr. Windham said. “He was good to his kids — they all got along. They were all real close, they were a close-knit family.”

He said the elder Mr. Leonard worked as a teacher’s aide and enjoyed doing projects with his children, but did not speak about the church or any religious beliefs at family functions he attended.

Of Lucas and Christopher, Mr. Windham said: “They were outgoing, they were friendly, they seemed fairly intelligent for their ages. They wore nice, decent clothes.”

The authorities believed the church had 40 to 50 members, with some living at the church, which sits along a busy road adjacent to a Catholic church.

Word of Life Church, which owns the building it occupies, was incorporated in the 1990s in Oneida County, naming four officers but giving little indication of its mission. A certificate of incorporation filed in 1995 lists Bruce Leonard as a trustee. The church property — valued at $210,843, and sitting on 1.86 acres — is tax-exempt as a religious organization, according to a 2015 assessment roll.

Chief Inserra did not say whether the types of beatings meted out on Sunday were commonplace. Lucas Leonard’s injuries, believed to be inflicted with the suspects’ hands and feet, were severe enough that the hospital initially told law enforcement officials on Monday that they believed he had been shot.

‘Always Been a Mystery’

Not much was known about the church’s need for secrecy, though it was intensely private: On Halloween, neighbors said the perimeter of the church — partially hidden by a tall, thick hedgerow — would sometimes be guarded by members, dressed in dark clothes, apparently to prevent vandalism or pranks.

Indeed, Lieutenant O’Neill said that most of the complaints his department had received over the years were from church members about neighbors or neighborhood children, many of whom viewed them warily. 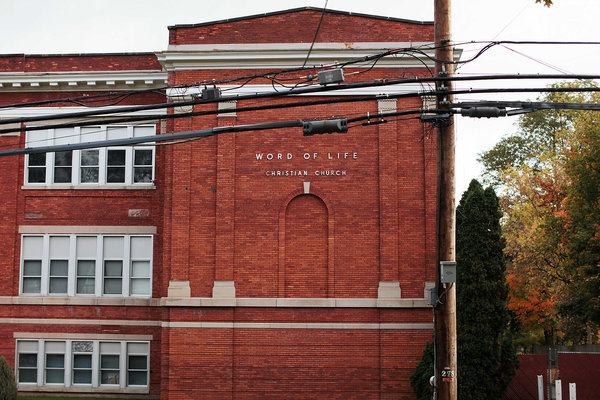 The Word of Life church occupies a former schoolhouse in New Hartford, N.Y., about 100 miles west of Albany.Credit Nathaniel Brooks for The New York Times

“Kids used to ride by on bikes in the summer and yell: ‘Don’t go in! You’ll never come out!’ ” said Lynn Laventure, 52, whose parents live across the street. “It’s always been a mystery.”

Neighbors and police officers said church members rarely interacted outside, though they kept the grounds clean and periodically held rummage sales on their front lawn, selling baked goods and coffee. Neighbors believed that children were schooled at the church site. Some members worked odd jobs in the community, but often returned to the church in the evening, behind the locked fence.

Lieutenant O’Neill said the number of people staying there was fluid, with living quarters located in the three-story front building facing the road, and church services held in the back, including the sanctuary where the attack occurred.

There were other oddities: There were fires on the roof, and the sounds of drums and chanting from inside. Dogs were heard barking at all hours, both inside and out, and the view in through many windows of the church was blocked, though a plastic bassinet could be seen on the ground floor on Wednesday.

Ms. Toukatly recalled that a few years ago, her daughter and sister-in-law were on her porch when they saw a 2- or 3-year-old boy walking on the sidewalk by himself, in front of Word of Life. The boy was in diapers and a shirt. The two women went running over to him, Ms. Toukatly said, wondering where he had come from.

When they banged on the door to Word of Life, there was a long wait and then a woman answered.

“She never looked at my daughter and sister-in-law and said thank you, or where was he,” Ms. Toukatly said. “Not a word. She just pulled him in and closed the door on them.”

Early on Tuesday, SWAT teams from state and local law enforcement entered the building, located in the town’s Chadwicks area, to serve a search warrant, but the authorities had little to say about the living conditions inside the building, because of the limits of the warrant. Fred Aiken, who lives just to the north of the church, said congregants would periodically build fires on the roof or in a large steel drum to the rear of the building, adjacent to a creek.

But on Wednesday morning, a broken shovel lay in that fire pit, with a bundle of rusted fencing nearby.

What appeared to be a handmade deck at the back of the main building had the word “Jesus” painted below it in block letters next to a cross. A rusted minivan with a child seat in the front passenger seat was seen, its keys sitting on the dashboard.

The Rev. Abraham L. Esper, the pastor at St. Patrick’s-St. Anthony’s Roman Catholic Church next door, said he periodically heard church members playing drums or saw them doing work in the yard or on the roof, often with children in tow.

At the front door of Word of God, several Bible verses were posted, including one from the book of I John: “God is Light, in Him is no darkness at all.”

Like many here, Mr. Esper rejected the assertion that the Word of God was a real church.

“This is not of God,” he said of the activities next door. “If this was of God, there would be growth. Not destruction.”