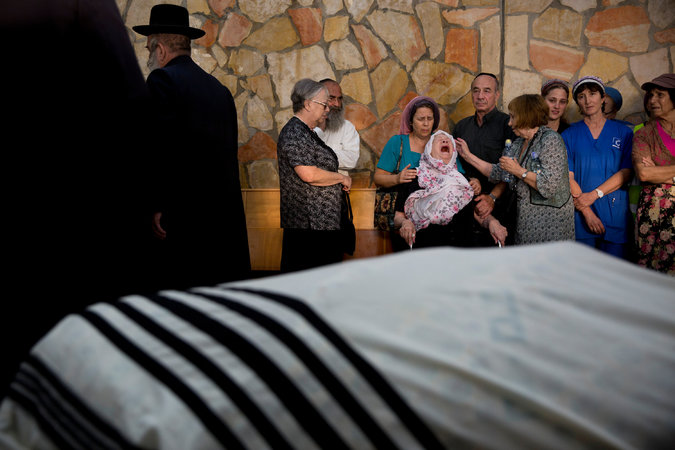 The funeral of Alon Gobberg in Jerusalem on Wednesday. He was killed Tuesday when two Palestinians boarded a bus and shot and stabbed passengers.Credit Oded Balilty/Associated Press

JERUSALEM — The Mamilla Mall, an upscale Jerusalem shopping street popular with fashion-conscious residents of all backgrounds, was desolate on Wednesday.

By lunchtime Hanit Tzeti, 35, had seen only two customers at the maternity clothing store where she works. “They came, bought and fled,” she said. “People are afraid.”Israelis were in little mood for browsing after more than two dozen attacks, most by young Palestinians armed with knives, that have killed seven Israelis this month, five of them in Jerusalem. At least 12 suspects in the attacks have been fatally shot by Israeli security forces and citizens at the scenes. Some Palestinians said they were scared of being mistaken for an assailant.New Israeli security measures introduced Wednesday included roadblocks and checkpoints at entrances of some Palestinian neighborhoods of East Jerusalem, and the deployment of reserve soldiers to bolster police forces.The Israeli interior minister, Silvan Shalom, said he had decided to revoke the residency status of 19 Palestinians from East Jerusalem who the authorities say were involved in the recent attacks. The revocations amount to what rights advocates call illegal deportation orders. They also invalidate family benefits like health insurance.Continue reading the main storyVideoHeightened Security in JerusalemResponding to a wave of Palestinian knife attacks in recent days, Israeli police have increased security and roadblocks across the country, particularly in Arab areas of East Jerusalem. By THE ASSOCIATED PRESS on Publish Date October 14, 2015. Photo by Dusan Vranic/Associated Press. Watch in Times Video »

The clampdown did not completely stop the violence. A young Palestinian wearing military-style fatigues rushed at officers with a knife at the Damascus Gate of Jerusalem’s Old City on Wednesday afternoon, according to the police account, and the officers fatally shot him. Two hours later an attacker stabbed and wounded a woman around age 70 as she was about to board a bus in West Jerusalem, and an officer in the vicinity shot him, the police said. The assailant’s condition was not immediately clear.

The Israeli measures exposed the deep and complex fissures in Jerusalem, a mixed and contested city that Israel claims as its united, sovereign capital, but that is politically, economically and culturally divided.

Shaer Zeidani, 24, a Palestinian cook at a popular cafe in the Mamilla Mall, where tables were mostly empty, said he had taken a taxi to work from his East Jerusalem neighborhood of Silwan. “It’s impossible to walk,” he said. “I get stopped all the time by the police; they suspect me.” He said some other Arab employees of nearby stores had not come to work.

During the second Palestinian uprising, which broke out in 2000, Jerusalem and other cities were hit by suicide bombings largely carried out by Palestinians from the West Bank. The Israeli military invaded the Palestinian cities and constructed a security barrier of walls and fences along and inside the West Bank in an effort to stop them.

This time, the majority of the perpetrators have been East Jerusalem residents armed with knives, and most of the attacks have taken place within the city.

Israel captured East Jerusalem from Jordan in the 1967 war, then annexed it in a move that has never been internationally recognized. The Palestinians demand East Jerusalem as the capital of a future independent state, and much of the world considers it illegally occupied. 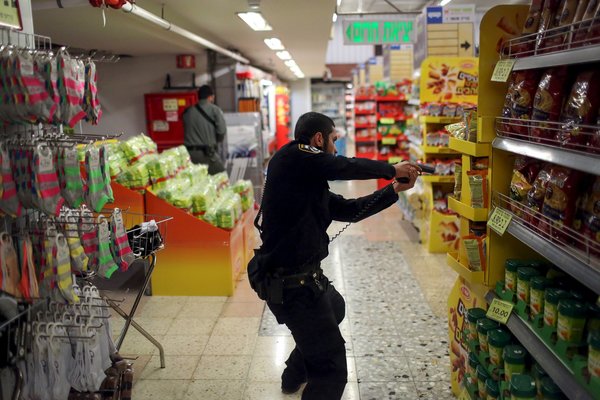 An Israeli police officer searches a supermarket in the  Jerusalem Central Bus Station on Wednesday after a report of a woman's stabbing outside.Credit Noam Moskovitz/Reuters

Most of the 300,000 Palestinian residents of East Jerusalem chose not to apply for Israeli citizenship and hold permanent residency status, allowing them to work and move freely throughout Israel. Making up about a third of the city’s total population, many have a better standard of living than Palestinians in the West Bank or Gaza.

But according to data collected by the Jerusalem Institute for Israel Studies, an independent Israeli research center, about 77 percent of Arab families in Jerusalem are below the poverty line by Israeli standards, compared with about 21 percent of the city’s Jewish families.

About 200,000 Jewish Israelis now live in East Jerusalem, across the 1967 boundary but within the city limits.

In a column in the Israeli daily Maariv, Ben Caspit, a frequent critic of Prime Minister Benjamin Netanyahu of Israel, said he was “dividing Jerusalem.” The “partial blockade” on East Jerusalem neighborhoods that “puts up a partition between us and them,” Mr. Caspit wrote, “will not last, and certainly will not stop stabbers.”

While Israel accuses the Palestinian leadership of participating in the incitement to violence, Palestinians called the new Israeli security measures a disproportionate response of collective punishment that will only worsen the tensions. 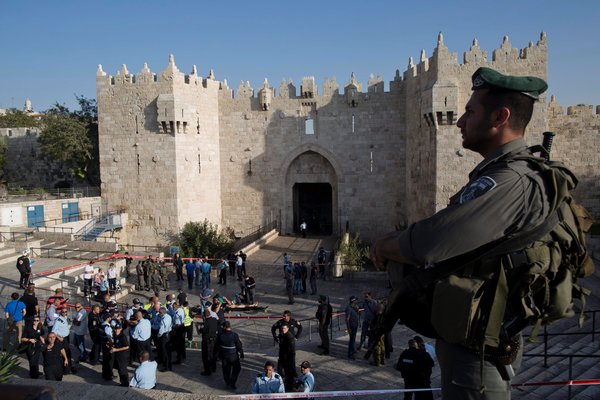 The scene where the police say a young Palestinian rushed at officers with a knife at the Damascus Gate on Wednesday afternoon.Credit Abir Sultan/European Pressphoto Agency

“East Jerusalem is the capital of Palestine,” Saeb Erekat, a senior Palestine Liberation Organization official, said on Voice of Palestine radio. “If they think that they can reach security with these measures, they are wrong. The Palestinian people will continue to defend themselves.”

Three Israelis were killed on Tuesday alone in Jerusalem: two in an attack on a bus at the juncture of Jewish and Arab areas, after two assailants boarded it armed with a knife and a gun, and one pedestrian in an ultra-Orthodox neighborhood who was rammed by a vehicle and then hit with a meat cleaver. All three assailants came from the East Jerusalem neighborhood of Jabel Mukaber.

On Wednesday morning, the police closed one of three entrances to the neighborhood, a vast Palestinian area of hilly roads. Another was half-closed — some residents were stopped for questioning, but others were waved through.

“More than 50,000 people live here, and they are punishing the entire village,” complained a man who asked to be identified by his nickname, Abu Anas, and who said he was trying to take his teenage son to a health clinic. “This is a racist decision and will only bring about more violence in their neighborhoods.”

In Issawiya, another East Jerusalem neighborhood frequently roiled by clashes between young Palestinians and Israeli forces, troops bolstered security at a checkpoint that has been in place intermittently since an Israeli gas station was vandalized last fall.

On a rocky plateau overlooking the area, more than a dozen officers held rifles as they inspected cars going in and out. 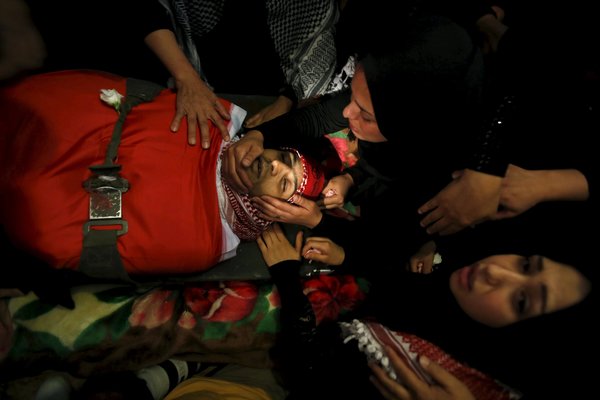 The funeral Wednesday in Bethlehem for Mutaz Zawahereh, who was killed by Israeli troops during clashes on Tuesday.Credit Mussa Issa Qawasma/Reuters

“It’s a difficult situation; it’s not convenient for anyone,” said one border police officer, speaking on the condition of anonymity because he was not permitted to talk publicly. “It’s not what we want; it’s what we need to do.”

The intimacy of the violence is also finding expression in the measures Israelis are taking to protect themselves. Unlike the suicide bombings, stabbing attacks can involve more of a struggle. One Israeli passer-by helped subdue the perpetrator of Tuesday’s meat cleaver attack by hitting him with a selfie stick.

The only stores doing brisk business in Jerusalem were those selling tear gas, pepper spray, stun guns and batons, though several have run out. Yitzhak Mizrachi, owner of the downtown Magnum 2525 gun store and shooting range, said his sales had doubled.

The public security minister, Gilad Erdan, approved steps on Wednesday that would make it easier for civilians to obtain gun permits. Several Israelis, he said, had helped the police in stopping assailants.

Ynet, an Israeli news site, posted a video in which a burly Israeli boxing champion and Krav Maga expert, Ran Nakash, demonstrated how to repel a stabber. He recommended arm-blocking movements and a groin kick.

Although many Israelis are anxious and on alert, many are also defiant and say life must go on.

“If we are afraid, we are lost,” said Ami Benayoun, 53, sitting at a table outside an ice cream shop on West Jerusalem’s Jaffa Road. He said he was not carrying any means of self-defense. “I have just my hands,” he said.

A driving instructor was flying Israeli flags from his back windows in a gesture usually reserved for Independence Day. And a well-known West Jerusalem dog-walker advertised a new service on Facebook this week, offering to accompany children to school for no charge.