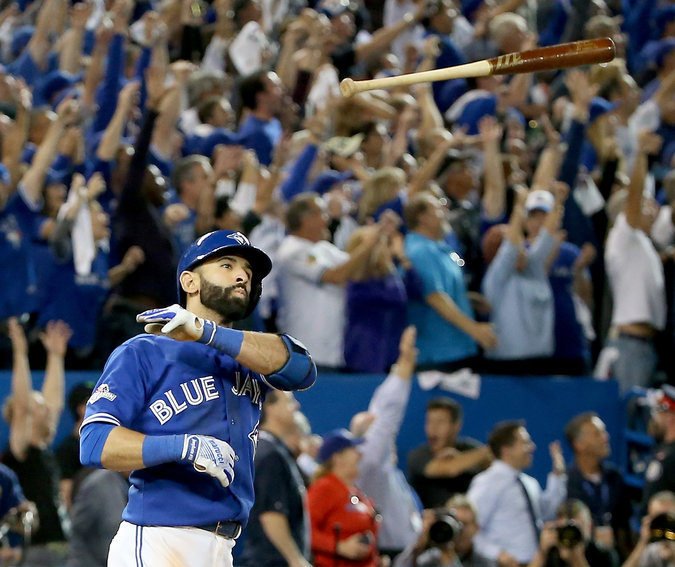 The Blue Jays’ Jose Bautista tossed his bat toward the Rangers' dugout after hitting a three-run homer in the seventh inning. Toronto advanced to the American League Championship Series for the first time since 1993.Credit Tom Szczerbowski/Getty Images

TORONTO — Postseason baseball had been absent from Canada for 22 years until this remarkable season, but the two decades’ worth of controversy, excitement and drama that fans had missed were synthesized into one rollicking and, at times, menacing inning that will be remembered for years to come.

The celebration continued into the early morning, hours after what may come to be known forever as the Inning.After the dust had settled, and the bottles and trash thrown by playoff-starved fans at Rogers Centre had been cleared, and a protest had been filed, and Jose Bautista had hit a three-run homer for the ages, the Toronto Blue Jays beat the Texas Rangers, 6-3, on Wednesday to win Game 5 of their American League division series. The Blue Jays advanced to the league championship series for the first time since 1993, when they won the World Series.Oh, and the benches emptied twice, which explains why the seventh inning lasted 53 minutes.“A lot of veteran players in the dugout at the time said it,” Blue Jays pitcher R. A. Dickey said. “None of us had ever seen anything like it — not in the minors, not in winter ball, not anywhere. It was incredible.”Photo 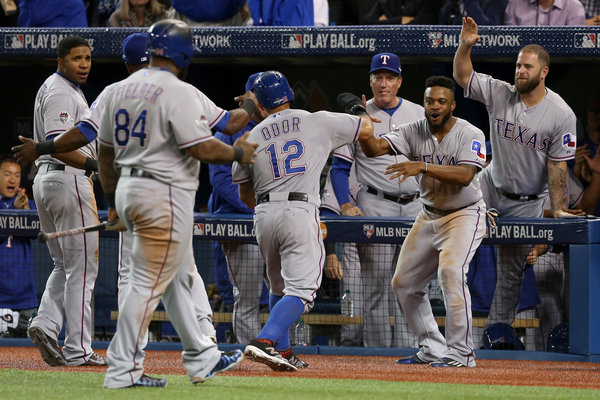 Bautista’s tiebreaking home run was the culmination of so much emotion and agitation that when he saw the ball hit the facing of the second deck in the bottom of the seventh, he flung his bat toward the Rangers’ dugout in a gesture that combined joy, determination, anger and relief.

Not long before, the domed Rogers Centre had been pulsating with anger over a controversial call by the umpires. But when Roberto Osuna struck out Wil Venable for the final out, there was only joy.

The Blue Jays, who lost the first two games of the series and roared back to win the final three, raced out of their dugout to celebrate along with an announced crowd of 49,742.

“That was the craziest game I’ve ever been a part of,” Blue Jays catcher Russell Martin said as he sipped Champagne in the exuberant postgame celebration. “That was the best moment of my life. Magic.”

The top of the seventh included a bizarre play in which Martin’s innocent throw back to the pitcher struck Shin-Soo Choo’s bat and rolled onto the field, allowing — after much argument, a review by the umpires and a Blue Jays protest — the go-ahead run to score. 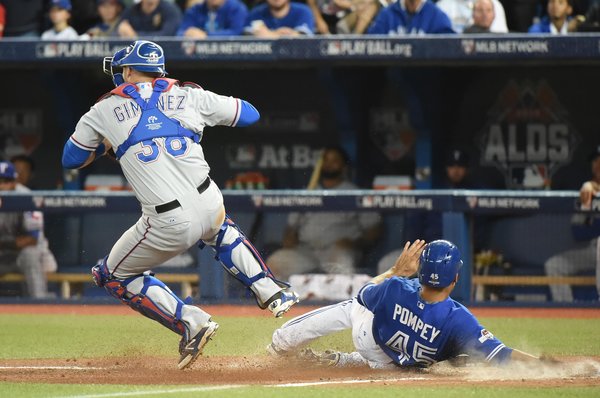 Dalton Pompey was forced out on a throw to Rangers catcher Chris Gimenez in the seventh.Credit Dan Hamilton/USA Today Sports, via Reuters

Once order was restored and a near riot averted, the bottom half of the inning was just as strange and dramatic. The Rangers made three straight errors — two by shortstop Elvis Andrus — and the Blue Jays drew even on an odd-looking fielder’s choice. Then they surged to an insurmountable lead on Bautista’s home run, the biggest homer here since Joe Carter’s blast won the 1993 World Series.

The most controversial and bizarre play was covered by Rule 6.03 (a)(3) in the Major League Baseball Rule Book, describing when a batter interferes with the catcher’s throw back to the pitcher.

With the score tied, 2-2, Rougned Odor was on third base. After a 1-2 pitch from Aaron Sanchez to Choo, which was called a ball, Martin tried to throw the ball back to Sanchez. But it struck Choo’s bat and rolled halfway toward third base.

“I’ve thrown the ball back to the pitcher close to a million times,” Martin said, “and I wait until the biggest game of my life to do that. But it just set up one of the greatest teammates ever to be the hero, and he came through for the team, the city and the country.”

With the ball lying in the infield, Odor broke for home, but the plate umpire, Dale Scott, called time and sent Odor back to third. Texas Manager Jeff Banister argued, and Scott, after a lengthy discussion with his colleagues and Banister, reversed the call and awarded Odor home plate. 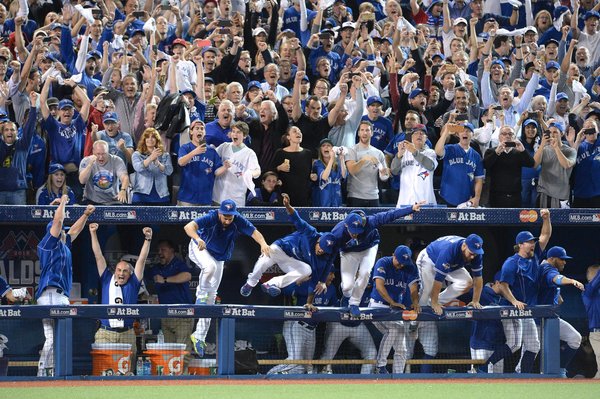 Blue Jays players leapt out of their dugout after the final out of a 6-3 victory over the Rangers in Game 5.Credit Chris Young /The Canadian Press, via Associated Press

“That was my mistake,” Scott said. “I was mixing up two rules, and I called time, but then it started clicking. I went, ‘Wait a minute, wait a minute, there’s no intent on the hitter.’ ”

The reversal brought John Gibbons, the Jays’ manager, out of the dugout and unleashed howls from the stands. The booing was deafening, and some fans showered the field with full bottles of water and cans of beer along with game programs and any other debris they could find to demonstrate their outrage.

At least one can thrown from the upper deck appeared to hit a fan in the lower seats. Several bottles also came close to hitting umpires, players and members of the stadium cleanup crew as they gathered the projectiles.

Gibbons argued and then asked the umpires to review the play with the officials in New York. After that review, the umpires again ruled in the Rangers’ favor, causing more debris to cascade onto the field.

Gibbons also filed a protest, although that became moot with the victory. When play finally resumed more than 10 minutes later, Sanchez struck out Choo. But as crazy as all that was, it was about to get even more outlandish in the bottom of the inning with the three errors by the Rangers — one fielding by Andrus; one throwing by first baseman Mitch Moreland; one catching, also by Andrus — to load the bases.

“It’s the toughest time in my career right now,” Andrus said. “I can make that play 100 times for sure. It’s a lot of pain right now. I feel like I let down my team, my city. It hurts.”

One out later, with the bases still loaded, Josh Donaldson hit a flare over the head of Odor at second, allowing Kevin Pillar to reach home and tie the score, 3-3. The stadium, not for the first or last time, erupted in cheers.

With two runners on, Bautista, a Blue Jay since 2008, created his seminal moment. He sent a 1-1 pitch from Sam Dyson screaming into the left-field stands, and just as it struck the second deck, Blue Jays players burst out of the dugout to celebrate.

“After all the guys stopped punching me and hitting me is when I kind of started realizing what happened,” Bautista said.

As the celebration continued, the next batter, Edwin Encarnacion, whose home run in the sixth had evened the score, 2-2, exchanged angry words with Dyson. The dugouts emptied, and there was shoving, but no punches were thrown. There was one more benches-clearing incident at the end of the inning, also involving Dyson, but it ended peacefully.

It felt like the only peaceful moment in one of the wildest, most head-scratching innings (and games) in postseason history.