PARIS Canon Inc, the world's biggest maker of cameras and printers, is setting its sights on higher growth fueled by acquisitions as it expands into related markets like video surveillance and medical imaging, Chairman Fujio Mitarai said.As a result the Japanese group has revived a decade-old annual-sales target of 5 trillion yen ($42 billion) and is also aiming to improve its profit margins, despite declining consumer sales.New business markets include video surveillance, industrial printing and cinematography, areas it only entered in the past five years but where it now ranks as a global market leader, Mitarai told Reuters in an interview at Canon EXPO, its new technology show which is being held in Paris this week.The 80-year-old chairman and chief executive also said Canon is ready to spend at least 400 billion yen ($3.4 billion) on acquisitions in higher-growth professional markets, including network video and security, robotics, medical equipment and materials used in ink, toner and 3D printing."I am sure there is actually a lot more potential. That (400 billion figure) might actually grow," Mitarai said. "I think it is safe to say that at this moment, we could go up to 400 billion yen, for sure." In February it agreed to buy Swedish video surveillance firm AXIS for 334 billion yen, or around $2.8 billion, which, with other network video assets, took Canon to the top of the video surveillance market. Canon has had to adapt to sharp declines in consumer camera and printer sales as smartphones make compact cameras redundant and consumers print out fewer snapshots, even as its professional camera and lens business continues to thrive."In the last four years, we have had to think of ways to offset that shortfall in our camera business," said Mitarai.Canon is now looking to use ultra high-definition lenses to transform a public safety market known for grainy black-and-white imagery, aiming to repeat its success in professional cinematography, where its low-light, compact cameras have seized a 60 percent share in the market for films, TV series and documentaries just five years after first entering the business. This week it was also showing off an ultra-long telephoto lens, capable of reading lettering on the side of buildings 15 kilometers away, and a prototype system for night-time security cameras that can capture images of human faces in complete darkness, without infrared lighting.RAISED TARGETS FOR SALES, PROFIT MARGINSWith financial results fluctuating wildly with yen exchange rates in recent years, the company postponed hitting a 2010 sales target of 5 trillion yen until 2015 but sales last year amounted to some 3.73 billion yen and analysts expect a rise of just 3.5 percent this year to 3.86 trillion.They are also forecasting slight declines three years out.Mitarai's more bullish outlook depends on a growing percentage of sales from higher-growth businesses and a willingness to pursue further acquisitions."Starting next year, with our 2016-2020 plan, our goal is to reach 5 trillion yen by 2020," he said."What constitutes this 5 trillion will be quite different: Maybe 30 to 40 percent will be derived from the new businesses," he said of markets Canon has entered in the last five years.Mitarai said he was also aiming for a higher operating profit margin by 2020 of 15-20 percent and a net margin of 8-10 percent, assuming similar corporate tax rates and roughly stable currency exchange levels.Analysts, on average, are forecasting net margins over the next three years of between 6 and 7 percent and an operating margin of around 10 percent, according to Thomson Reuters data. Canon's profitability peaked in 2007, when its operating margin hit 16.9 percent.The company is set to detail its new five-year plan ending in 2020 in January, when it reports its results for 2015. ($1 = 119.4600 yen) (Editing by Greg Mahlich) 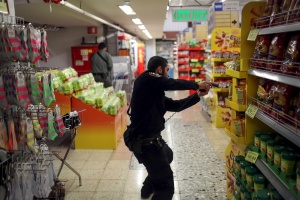