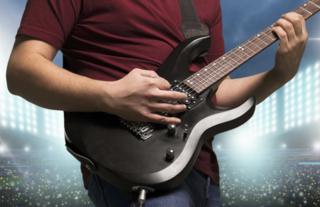 Streaming is the future of music - that is now the accepted wisdom. But if that is the case, the music industry is never going to be worth a lot because paying for a streaming service is very much a minority activity.

Now, though, a well-funded British business plans to use simple hardware and software to change that.

The Electric Jukebox, a device you plug into the back of your television, comes with a voice-activated remote control and a year's access to all the music you could possibly want.

The man behind the idea, Rob Lewis, has a track record in this area, having founded Omnifone, a company which provided mobile phone operators with music services.

It is much simpler to set up than streaming music systems like Sonos or services like Spotify, and he says that is the key selling point.

The idea for Electric Jukebox came when one Christmas, he and his brother decided to buy a Sonos system complete with a Spotify subscription for their parents.

"Then he said I would have to provide technical support - that was the light-bulb moment."

The thought of constant queries about how to use a complex system was not attractive, so he set about creating something much simpler.

"I set the team a challenge. Can we make something that comes in a box, affordable for most people, open the box, and two minutes later you've got a jukebox with all the world's music."

When I am given a demo of the product which is being launched in London today I am impressed. It does seem simple, with just three options on the menu - "my music", "discover", where you get curated playlists, and "search", your gateway to the world's music.

And just press a button on the remote, say "Bruce Springsteen" and the Boss's music is all waiting for you.

Bear in mind that you can get Google's Chromecast or Amazon's Fire Stick for £30 or £35 respectively, and they will do much the same job.

True, you would then have to pay around £10 a months for a subscription service, but you might choose instead to stream all your music from YouTube for nothing.

Image caption Rob Lewis is the man behind the idea

Rob Lewis and his colleagues try to convince me I am wrong to be so sceptical.

Their market research shows a large proportion of average British families would see the appeal of a one-off payment rather than a monthly deal. (You have to pay £60 to renew the music service for another year).

Globally, there are only 50 million people paying for a streaming service, while a decade ago 200 million bought a CD every months.

Turning the big-screen TV at the centre of every home into a music centre would win back millions of those lost customers.

And it is true that if you had said to an average family a decade ago that you could have a new music system plus as many CDs as you want for a year, all for £179, then they would probably have bitten your arm off.

But the sad truth, both for the Electric Jukebox and the entire industry, is that in the last decade, the majority of its customers have just lost the habit of paying for music.

One of the music industry's most astute analysts Mark Mulligan tells me he thinks the Electric Jukebox is a great idea - in fact he had proposed something similar in a report back in 2011.

But he is still dubious about whether it would ever make much money for its backers.

"Most of my clients are music start-ups," he says "and I tell them that they are never likely to make a profit because the economics are so bad. Their best chance is to sell on to a bigger firm."

As he points out, it is the change in behaviour of all of us when confronted with an abundance of free online content that has made the economics look so bad. Just as people who used to buy newspapers are less likely to pay for online news, so the CD buyers of old have given up on the idea of buying music.

It is an argument also being made this week by a musician, Simon Indelicate of the indie band The Indelicates.

In an epic (and occasionally sweary) blog-post he explores the economics of his trade in the digital era and concludes that music is worthless:

"Or, more accurately, 42 minutes of generic recorded music transmitted as data over the internet has a market value of as close to nothing as makes no difference."

Which is not to say that some musicians - and indeed some inventive entrepreneurs like Rob Lewis - cannot find ways of making music pay.

It is just that the era when the average person gave a decent chunk of their cash to the music industry is over, and it shows no signs of coming back.