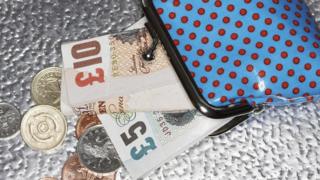 The NCA said it was working with the FBI and other authorities to limit the malware's usefulness to criminals and one man had already been arrested.

One expert told the BBC the attackers had been particularly cunning to avoid being detected.

"This is very sneaky software that relied on people not being vigilant with their online banking," said Prof Alan Woodward, a cybersecurity expert who advises Europol.

"If you imagine thieves making lots of little transactions, rather than one big one, it is more likely to go unnoticed."

How did Dridex work?

The Dridex Trojan infected computers through a malicious Microsoft Office document, typically disguised as an invoice and emailed to victims.

The malware relied on tricking people into installing it on their machines, rather than exploiting a security hole in the operating system.

It would then eavesdrop on people entering their bank account details and send the information back to the attackers.

"Banks have software running constantly in the background looking for suspicious transactions, but criminals are adopting patterns that are not flagged up," said Prof Woodward.

"With thousands of computers infected, they only need to take a small amount from each bank account and suddenly they've got millions."

What is being done about it?

The NCA said it was trying to "sinkhole" the Trojan - working with internet service providers to divert the software's attempts to "phone home" with stolen bank account details.

The US Department of Justice said on Tuesday that a Moldovan man, Andrey Ghinkul, had been arrested in Cyprus in August and the United States was seeking his extradition.

The FBI encouraged people to use anti-virus software to help protect their computers.

"All the usual advice applies," said Prof Woodward. "Don't open unexpected email attachments, even if they appear to be from the bank.

"And check your bank statement for suspicious transactions. Query anything you don't understand, even if it's a small amount, as criminals may be taking a small amount from millions of other people."