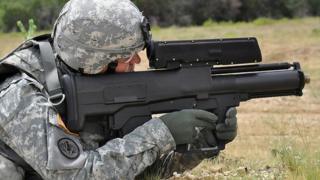 A computerised weapon designed to attack enemies protected by walls or otherwise sheltered is set to be tested by the US Army early next year.

The XM25 "smart grenade launcher" lets combatants set its ammunition to explode when it reaches a set distance.

It means a grenade can be set to go off just after it passes through a window or is just over the target's head, without having struck an object.

One expert called it "revolutionary" but warned there were risks involved.

An earlier prototype was tested in Afghanistan but was withdrawn from use in 2013 after a flaw caused a soldier to be injured during a training exercise.

The XM25's developer - Virginia-based Orbital ATK - revealed in an interview with the Defense News website that the US Army planned to carry out new "qualification tests" in the spring.

"It provides combat overmatch," said spokesman Jarrod Krull, who added the weapon could be in use by early 2017.

The shoulder-fired machine uses a laser rangefinder to help its user determine the distance to their target and then tells them how to adjust their aim to take into account the force of gravity.

The settings can be altered, so, for example, if a window is measured to be 200m (656ft) away, the grenade can be set to explode after 201m to travel just past the wall for maximum effect.

Each of the five 25mm (1in) grenade rounds contained in a clip can be programmed to detonate at a specific distance, which they measure as they speed towards their target.

Orbital ATK says the weapon can be used to "precisely" kill hidden enemies up to 500m away or hit them with a powerful air-burst from up to 700m.

"When it was combat-trialled in Afghanistan, it was reportedly incredibly effective," Justin Bronk, from the defence think tank Rusi, told the BBC.

"It's extremely useful in fairly open areas with longer ranges where there tends to be fairly hard cover in abundance - so ditches, thick walls or irrigation dykes.

"The ability to destroy targets behind cover easily and without having to wait for other fire assault is hugely useful, added to the fact that it is man-portable and usable by the average soldier."

The weapon has been in development since the 1990s and was originally scheduled to be widely deployed by August this year.

Soldiers who tested in Afghanistan dubbed it "the Punisher", and an army press release from the time said the Pentagon expected to spend $35,000 (£22,650) per weapon, with each round costing a further $55.

But the launcher was withdrawn from service in April 2013 after a grenade primer ignited in one of 12 test units being used at the time. Two grenades had accidentally been fed into the firing mechanism at the same time.

Although a safety mechanism prevented the grenade's warhead from exploding, the gunner testing the weapon received "minor" injuries.

Orbital ATK now believes the problem has been addressed.

But he added the launcher would still be ill-suited for many other environments.

"It would be of questionable value in urban situations where you are trying to do room clearing and there might be lots of civilians involved," he said.

"It is by nature quite indiscriminate - you can't see behind the cover of what you are trying to shoot behind.

"Yes, you can shoot the grenades behind windows, for example, but you'd have to be very, very sure that [the target aside] there was no-one else in the room."